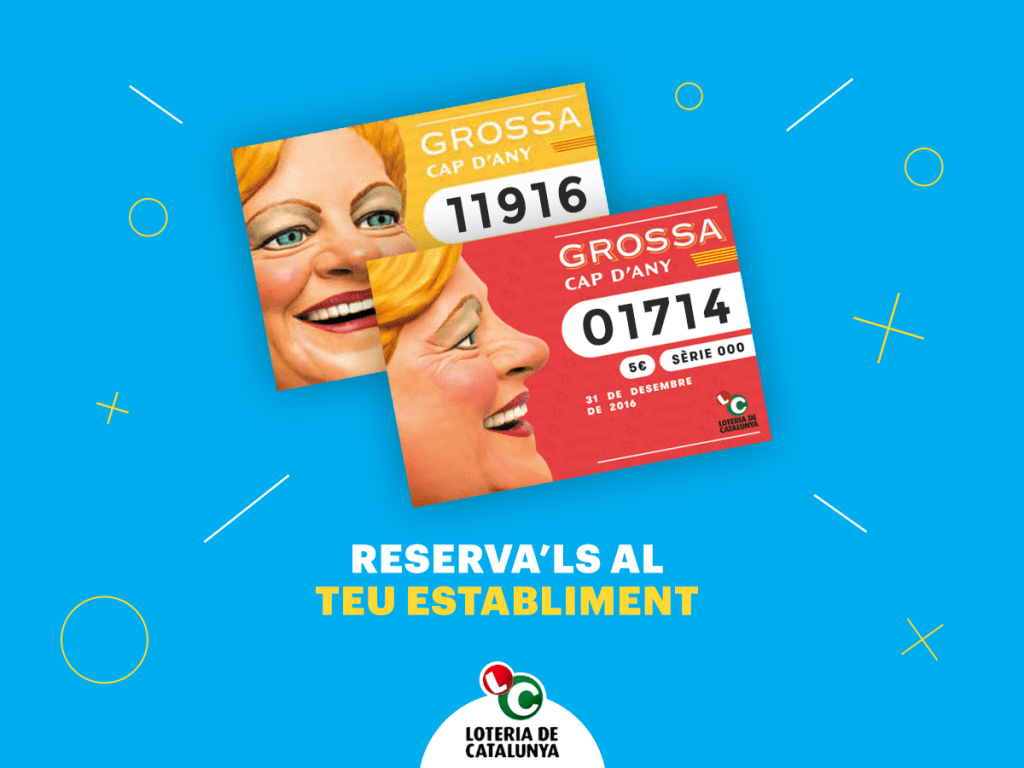 La Grossa is the big raffle game sold by Loteria de Catalunya, the provincial lottery entity operating inCatalonia region of Spain. This 5€ draw game culminates with a final drawing at 12 a.m. on December 31 for the “New Year Fat One” prize.

“We wanted something more attractive, with better visibility on the POS,” explained Esther Pinyol Rius, Chief Marketing Officer at NLS Catalonia. “We wanted to make a pack of four tickets, like a collection, of La Grossa at 5€ which is the same price and one ‘El Gordo’ ticket at 20€.”

Grossa 2016 tickets have been printed in different colors, including a bright lemon yellow and seasonal red and green. Another novelty of the 2016 edition is that the agents can print tickets through the lottery terminal; this means that players can select their favorite “lucky” numbers.

The Catalonian lottery has implemented a bold program to attract millennials. “Entitat Autonoma de Jocs i Apostes (EAJA) (the public entity responsible) is driving the marketing strategy,” said Pinyol. “This year the campaign is a lot more linked to social networks and the campaign itself is a lot more attractive and bold: based on envy versus high achievers—especially the ones ‘pretending’ on the internet.”

The La Grossa female “mascot” was created in 2013 by EAJA. “It’s a traditional folk character in summer festivities in Catalonia. Almost all the villages in Catalonia have this kind of character, called ‘capgrossos’ (big heads). She tours during some months all over the territory and is played by three different actresses,” explained Pinyol.

La Grossa is similar to the famous ‘El Gordo’ product sold by the Spanish national lottery (SELAE). It is also a passive game that is a Christmas tradition to purchase.

“They have similar prize structures. They share time on the calendar and they are both perceived as traditional for Christmas time,” reported Pinyol.  “However, the top prize for La Grossa is smaller 100,000 euros vs 400,000 euros.”

The majority of La Grossa sales occur during December. “Tradition is a special moment during this time of the year. Christmas is a high spending time. It’s a seasonal demand,” she said.

Numerous special promotions are planned for Grossa 2016. At EAJA’s central Barcelona office, there is a Big Head of La Grossa that lottery employees can wear for special events.

“In addition to the ‘mascot’ touring villages, we also have a ‘Win for life’ promotion where 2,000 euro per month can be won for one year. We do this promotion on social media,” said Pinyol.

La Grossa sales totaled 22.9 million € in calendar 2015. Given the revamp of the ticket and the accelerated marketing push through social network, this could be a ‘Fat One’ for 2016 sales.

In 2017, EAJA will launch the first-ever “Grossa Sant Jordi” ticket. It is tied to Feliç Diada de Sant Jordi (Feast Day of Saint George)—the patron saint of Catalonia and immortalized as the dragon slayer. The holiday is celebrated on April 23.

“This spin-off is based on another Catalan folkore tradition, Saint George,” said Pinyol. “It’s going fine. I will add the designs for this draw. Our marketing will be linked to the tradition.”

NLS works closely with EAJA in developing novel marketing plans, such as the Sant Jordi Grossa. The company is also in charge of social media, the website and the brief created for advertising purposes.

“NLS proposes, we review together, and then decide,” explained Pinyol. “We propose products, plans, campaigns and promotions every June for the following year. We also suggest a budget based on sales and estimation of future sales. It’s an effective partnership.”