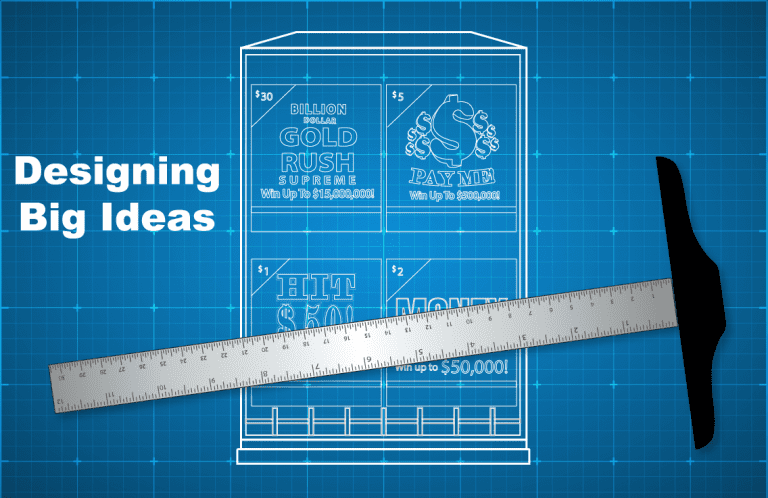 In October 2020, the Florida Lottery launched a two-store instant in-lane trial with Southeastern Grocers, Inc. (SEG). It is the parent company for multiple brands, most notably Winn-Dixie, which has more than 300 locations in Florida.

What Can We Do Better?

Retail is evolving, and unfortunately, not always in a way that is advantageous to lotteries. More retailers across trade channels are adopting “Clean Stores” strategies. A “Clean” store, lane, or, more importantly, for lotteries, counter means that the store is removing most promotional materials. While it is not a new concept, it is a growing movement among retailers who want to protect and grow their brands and differentiate themselves from competitors by limiting and controlling manufacturers’ marketing in their stores. The pandemic forced retailers to reorganize materials and add plexiglass barriers, which reduced counter space even more.

Lotteries take up a considerable amount of counter space with terminals, screens, cables, and promotional materials, making it a target for Clean initiatives. “We saw in store remodel processes that some of our on-counter Scratch-Off ticket presence was becoming in-counter presence,” Kristin Cleveland, Senior Manager, Corporate Accounts, Florida Lottery, said.

The Florida Lottery tried regaining some of the lost presence with SEG, investigating other opportunities, like lighted menu boards. As many lottery marketers and sales staff have heard in the past, the answer is often no. However, SEG instead asked, “Well, what can we do better?”

The Florida Lottery had been trying to find a partner for its instant in-lane pilot. Retailers had consistently demurred when asked about doing a trial. “It was just never the right time, or we’re going in a different direction, or it just doesn’t fit our store initiative,” Tony Kirkland, Director of Sales, Florida Lottery, said.

Retailers, like lotteries, can be risk-averse. The three L’s—labor, losses, and lines—dictate their approach to almost everything. “It took an out-of-the-box thinker like SEG to finally ask ‘what can we be doing better?’ and then give us the open-door to explore new possibilities,” Kirkland said.

The sales team deserves all the credit. It is their boots on the ground. They get everything done for us. And without them, none of this is possible.”—Tony Kirkland, Director of Sales, Florida Lottery

When SEG began their outside-the-box thinking and invited the Lottery to develop solutions, both organizations started employing creative mindsets. “It allowed conversations to morph. It evolved from talking about presence for scratch-off at their customer service desk to making scratch-off available in a floor merchandising concept,” Cleveland said.

The industry has been exploring instant in-lane solutions for years. Most strategies would require a ticket-by-ticket activation solution, something the industry is still pursuing. Some vendors have advanced terminals, but for the Florida Lottery, this was not an option. The Lottery has a cap on how many vending machines it can have in the field.

The key for SEG was speed. They wanted a ready-for-market, instant in-lane solution. The Lottery already had concepts for a traditional merchandising unit and began even sending over prototypes. “It is kind of interesting that some of the initial merchandising concepts were pieces that have been around for a while. Sometimes something that is old becomes new again depending upon the audience,” Cleveland said.

Since individual stores have different layouts, a one-size-fits-all approach wasn’t practical. When the Lottery sent over the first dispenser, SEG returned with some feedback giving the Lottery specific dimensions for how they envisioned the dispenser. The SEG management team planned to place the unit next to the PIN pad for payments, which required them to reconfigure their lanes.

“It started with readily available concepts, but then, after getting their feedback, we continued to work together to find the right solution. We kept dropping off dispenser types, getting their feedback and then ordering another one. We really involved them in the process because they know what’s going to work best in their stores,” Cleveland said.

SEG decided on a four-ticket dispenser. The unit’s base locks into the counter. Store employees would remove the unit after they leave the lane. “It is simple, it is effective, and it is no different than any of our other units,” Justin Rock, Deputy Secretary of Product & Sales, Florida Lottery said. “This is the preferred solution overall. It keeps costs down for both the retailer and the Lottery, and it minimizes store instructions.”

The merchandising unit will continue to evolve. With constant feedback from SEG, the Lottery is working on the next iteration of the unit. “One of our focuses is to ensure that we have different variations to meet needs and adjust to circumstances, such as security. Everyone has the opportunity to express concerns and ideas as we work towards the optimal design,” Cleveland said.

The two-store pilot launched in October 2020. When players go through the checkout line, the process is simple. They ask for a ticket. The cashier removes the ticket from the bin and then scans it, which prompts age verification. The associate reviews the customer’s ID—just as they would for any other age-verified product—and, once verified, adds the purchase to their cart. The player receives the scratch-off ticket when the transaction is completed.

Players can purchase the tickets with cash or debit cards. If necessary, the purchase can be a split tender. Cashless purchases were essential for the pilot as the pandemic has further boosted the already growing cashless trend. “Not only do we get greater visibility and impulse purchases, but we also meet the current consumers’ needs for a cashless transaction,” Cleveland said.

The SEG point-of-sale system utilizes Universal Product Code (UPC) for their ticket sales rather than Price Look-Up codes (PLUs). A UPC is the bar code for each scratch-off game, which allows the retailer’s sales system to track individual purchases. It will enable both SEG and the Lottery to better understand how consumers reacted to the new opportunity and then make data-driven decisions. “Southeastern Grocers has been a true partner in this process. We are sharing information to learn as much as we can about this opportunity’s true potential in today’s retail environment. That’s what a pilot is about!” Cleveland said.

SEG pilot stores continue to outperform both the chain and statewide Scratch-off growth. The results have exceeded both the Lottery and SEG’s expectations. “They’ve continued to be excited about the opportunity that this brings in terms of both revenue and the convenience for their customer,” Cleveland said.

The combined store Scratch-Off sales growth is 39.31%, which is more than double the state’s growth for the same period. Year-over-year, the pilot stores have sustained their percentage sales increases for over 19 weeks.

The estimated in-lane sales represented just under 15% of the stores’ total Scratch-off sales. Since the pilot began, the pilot stores have sold all instant ticket price points in-lane. A $30 ticket, the Billion Dollar Gold Rush, was made available on February 22.

The Florida Lottery anticipates expanding the pilot to more stores soon. “We’re looking for a pilot expansion coming soon, hopefully, and rolling out to additional stores. That is on the radar already,” said Kirkland.

Even though the project was a bold step in a necessary direction, the team never had the chance to be nervous. “I didn’t have a lot of time to have the apprehension that we typically get with other big projects. The excitement was there, but there was no anxiety. All the moving parts came together so quickly. The Corporate Account team and Tony just made it happen,” Rock said.

Kirkland agreed but noted that waiting for the results was difficult: “It’s always a great thing when you don’t overthink things. But the anticipation did build-up for me as we waited for the settlement results. We were asking, ‘Okay, did it work the first week?’ What had me the most excited was just to see the sales results.”
Cleveland added: “It seems these conversations take a long time to happen. But when your retail partner is ready to move forward, then it moves very quickly. We always have to be thinking ahead to the next step knowing that it may take a retailer some time to get to it. But once they are ready, then the execution can happen very quickly.”

The results of the pilot have been nothing short of outstanding. With a pilot expansion coming shortly, the Florida Lottery anticipates continued success. It is also prepared for other retailers to be interested in testing the concept in their stores. “We’re sharing the positive impacts that we’re seeing from doing this with other retailers. We may not be sharing exact data points, but other retailers are being made aware that their competition is doing something new and that there are some really great things happening for us,” Rock said.
The Lottery is analyzing the data from the pilot and putting together a case study for other retailers. “We’re looking to put together some concrete evidence for our other retailer partners. We want to show what can happen when a retailer launches in-lane scratch-off ticket sales,” Kirkland said.

It seems a near certainty other retailers will be interested in such a successful program. The Florida Lottery has a long history of setting best practices, and it seems like this is a big idea that could proliferate across the industry. Other lotteries will undoubtedly learn from their example.

“I want to go back to that initial quote. When a partner asks, ‘what can we do better?’ That is when a true partnership is formed, and there is an opportunity to do something that can be this impactful. It is just fabulous,” Cleveland ended.