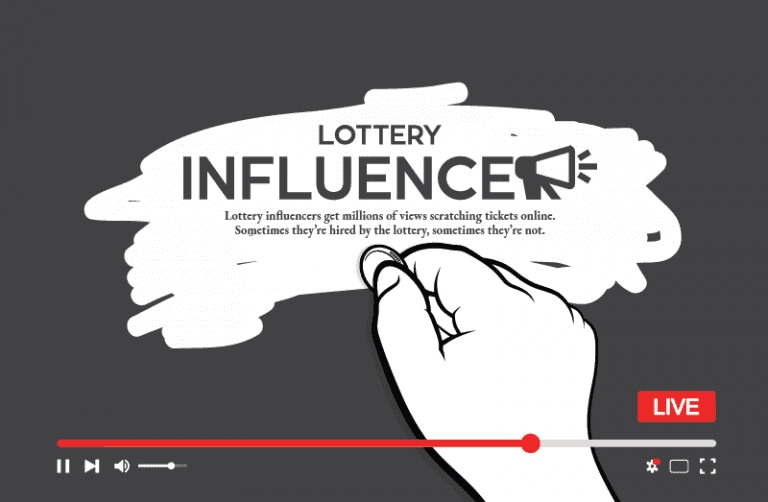 In the past decade, anyone with a phone can become a content creator. Phones and social media have fueled the creator economy, and for every hobby, there is an army of influencers with thousands of videos about the subject. The lottery is no different. Some influencers exclusively focus on lottery, others dabble. Some are hired by the lottery; others produce content of their own volition. This article explores some of the interesting facets of lottery influencers, from dump trucks full of tickets to retailers running out of $50 instants.

“No joke, I bought so many that they had to deliver them in a dump truck,”

Jimmy Donaldson, who is known as Mr. Beast on YouTube and other social platforms, said to his audience. “I could have bought dozens of cars, multiple houses, or so many other things. But instead, we have $1,000,000 in scratch-off tickets.”

His main channel has 86.3 million subscribers and 14.1 billion total views. He is known for producing contests with large cash prizes that feature other popular influencers. He has likely produced the most popular lottery video in the history of the industry.

His most recent video involving lottery, titled I Spent $1,000,000 on Lottery Tickets and Won, has 59 million views. “Mr. Beast” and his friends scan over 30,000 $30 tickets in a studio. On one side of the room, a large billboard displays the value of the cards he has scratched, and on the other, the amount of money he has won from the tickets. The video ends with the group winning $720,000, well short of their initial investment but relatively close to the prize payout percentage.

So how good is this for the industry? On one hand, it has not invested anything and received a video emphasizing its product to millions of people. Mr. Beast and his crew even use a lottery’s app to scan the tickets quickly.

It is easy to see a scenario in the future where a lottery or even a vendor with a new license ticket works with a popular influencer like Mr. Beast. Content creators add a different spin on lottery and it’s fun seeing the product being represented in a different way.

On the other hand, a video like this has significant issues from a responsible gaming standpoint. Mr. Beast only emphasizes winning. He scans and then immediately throws ticket after ticket away. He also loses $280,000 (though he probably made up the difference in advertising revenue). Finally, Mr. Beast’s audience reportedly skews younger as well.

Certainly, the industry cannot support videos exactly like what Mr. Beast did. Yet, his success does raise questions if lotteries could work with a superstar influencer with an older audience and a larger focus on responsible gaming. Even 10% of Mr. Beast’s views would be a huge success and introduce the lottery to different demographics. A game that could benefit from millions of views, like Powerball or a multi-jurisdiction instant, could see a big boost in sales with the right content.

On the opposite side of the fence from Mr. Beast is the lottery hobbyist influencer community. On YouTube, these smaller influencers often scratch tickets in front of the camera. Compared to Mr. Beast, their content is quainter, usually shot with a single camera from a point-of-view perspective. Their videos have less post-production. It is less exciting to a broader audience. But they have a genuine relationship with their audience, who skew older.

Lilly, from the YouTube channel Lilly’s Lottery, never intended to have a lottery channel. She started a 31-day blog, and one day she scratched a ticket on her channel. She instantly had 400 views, compared to her typical 12. Two years later, she has 4,200 subscribers and regularly gets more than 1,000 views on each video she posts, though some of her videos have hit over 100,000 views.

It is clear to see how much her audience values her. In early January, she was sick. Her audience left so many positive comments to support her: “Hope you get well Lilly! When I had covid, water was my best friend. I was drinking close to 8 bottles a day and I recovered surprisingly fast. Also, sugar is your worst enemy when you have a virus like this it should help you recover faster really hope you’re feeling better soon! Also, the $5 tickets are the only ones that are really brutal to me right now.” (I’ve added punctuation).

Lilly’s Lottery is just one of many “Scratcher” channels on YouTube. Scratcher Channels will work together for various events. For instance, the channels had a “Christmas party.” The influencers all had the same theme for their videos and even created a “Scratch-Off Coin” with the different channel logos on it.

These hobbyist influencers’ reactions to winning are authentic and infectious. They comment on each ticket and take time to enjoy playing the game. They are the antithesis of Mr. Beast’s video. And while their combined unique views is significantly less than his video, it’s hard to ignore that their audience is made up of core players.

Advertising to them would likely be unimpactful, given that they are core players. But at the very least, it is a perfect focus group. For instance, they always comment on the quality of the tickets and what they like or didn’t like.

An organized effort to utilize this brand community could be monumental. This group of consumers is organized around their love of the lottery. By supporting and listening to these influencers and their communities, the industry builds healthy relationships with its ardent supporters. It isn’t about pushing them to purchase but creating brand ambassadors.

As online gambling becomes legalized across the United States, the lottery industry will need devotees who understand the ethos of the lottery and defend it, like how PlayStation and Xbox enthusiasts defended their favorite machines during the Console Wars.

These brand ambassadors are hungry for support from the lottery. “Just recognition and acknowledgment would be great,” Lilly said. “I am also here. I am buying your stuff. You’re getting many views on your stuff through me. Just to receive a ‘hey, how are you. Any thoughts?’ kind of thing. Acknowledgment that I exist would be super awesome.”

Lilly also mentioned that getting lottery merchandise that she could give away on her channel would be incredible.

The Hoosier Lottery has been utilizing paid influencers since 2019. Its first campaign was heavily product-focused, but since then, it has used influencers for larger scratcher campaigns, as well as promoting its app and loyalty program. Now, when influencers are involved in the campaign, the lottery allocates 15% of its campaign budget for them.

Over the years, it has rebalanced how much it micromanages the influencers. At first, the lottery started with a very open-ended approach but has become more restrictive over time. “We provide them our guard rails and what our focus is, but still allow them the leeway so the posts can be authentic,” Matt Cooper, Digital Manager, IGT Indiana, said. “We’re also asking them to produce videos for us because that has outperformed everything else.”
The lottery’s influencers also must be Indiana residents. The dominant percentage of their audience must be Indiana residents. Their posts must be on Facebook or Instagram.

In its most recent campaign in late 2021, the lottery hired two influencers, and both were tasked to promote three different components of the lottery’s holiday campaign. First, the influencers published product-focused posts, which emphasized gifting tickets. Second, they posted about second-chance opportunities. Third, they posted about Lottery Lodge, which was a six-week digital challenge. Players could visit the Hoosier website and once registered, could play free online games, climb leaderboards and win prizes.

The lottery is now moving toward annualized contracts with influencers, instead of hiring them for specific campaigns. Throughout the course of the year, their audiences, who are generally between 18-34, will regularly see Hoosier Lottery messaging and read positive comments about the lottery.

“Sometimes even mentioning lottery on social media… can generate negativity with players that may not have had a winning experience. But with these influencers, there’s so much positivity in the comment sections,” Cooper said.

One of the best influencer campaigns in the lottery industry was the National Lotteries Control Board’s (NLCB) $10 Million Gold Rush campaign, a $50 (TTD) ticket. When the game launched in January 2020, the lottery did not have support from social media, so the lottery decided to use influencers to get visibility for its new game, particularly for the 18–34-year-old demographic.

IGT, which handles all marketing and promotions for NLCB, created a list of potential candidates for the lottery, scoring each influencer on a rubric. In total, it picked 10 approved influencers and 15 voluntary influencers (who were not paid but were media personalities). It was careful to avoid influencers that had posted controversial content in the past.

All influencers shared their videos 24-48 hours with the lottery before posting so it could screen them. NLCB approved almost all the videos, wanting them to be as authentic as possible.

The lottery also gave each influencer a premium black box with a bottle of Prosecco, branded champagne flutes, gold foiled branded t-shirts, and a scratcher game. They were supposed to use the items in their posts.

During the campaign, the lottery got close to 750,000 impressions, which is quite a feat for a country with 1.4 million people. Yet, after watching the videos, it is no surprise. Each of the influencers brought a unique approach.

Sunny Bling, a Trinidad radio host, produced one of the best posts. He was one of the lucky influencers who won money with the lottery ticket in his black box. He filmed himself going to the store and interacting with the retailer and the store’s patrons. He ended up buying another ticket with his winnings and then won again. His delight is contagious, and the other patrons are so excited for him that one starts to dance. To top it off, he distributes his prize money to the other players in the store before leaving. It is incredible.

While the effects of many digital campaigns are difficult to tie back to actual sales, NLCB felt the impact of this campaign. Retailers reported to the lottery that new players between 18-34 were coming and requesting the game, saying they had seen the videos online. For the first time, retailers were getting demand for a premium ticket. In three weeks, 60% of retailers had sold out.