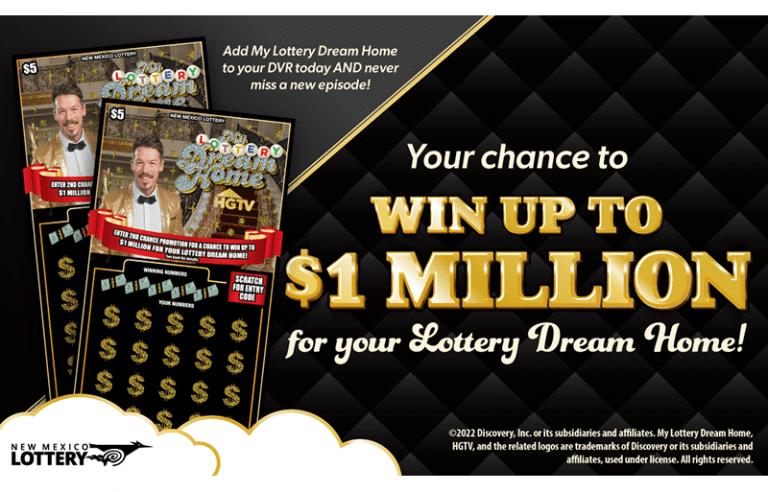 The New Mexico Lottery found itself in an interesting situation when its Chair of the Board, Reta Jones, presented a licensed ticket concept. “Reta is a big fan of HGTV. She loves My Lottery Dream Home (MLDH), and she asked David Barden, ‘When are we going to sell a MLDH ticket?’” Carolyn Cabell, Chief Operating Officer, New Mexico Lottery said.

MLDH would be a perfect property for an instant ticket. It is one of HGTV’s most popular programs. David Bromstad, the show’s host, visits real lottery winners after their big win to help them purchase a house. He learns their intended budget and then shepherds them to their dream home. The show’s concept would be a dream and a great winner awareness campaign, but it was not connected with the industry.

Unfortunately, for the New Mexico Lottery, that was a big problem. After asking around, they found the property was not tied with any lottery vendors. Barden had to go back and tell the Chair it couldn’t be done yet.

The idea was sunk in the short term, but it resurfaced during the pandemic. For months, people were stuck in their homes with little contact with the outside world. The Lottery had a renewed determination to offer a MLDH game. “We all have this newfound sense of what home means. We knew that this property would be so important right now,” Cabell said. “Lo and behold, Alchemy3 comes up with it.” 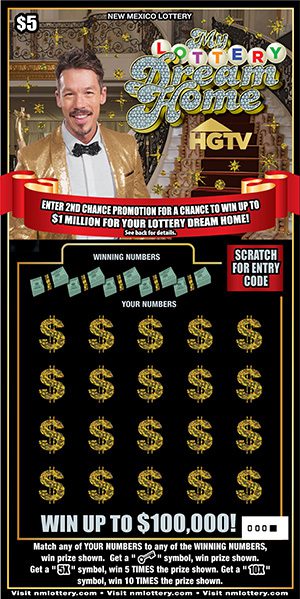 Alchemy3 successfully added the property to its portfolio in October 2021. When Karla Wilkinson, Director of Gaming Products, New Mexico Lottery, heard about the deal, she immediately got onto the phone. Wilkinson said, “I told them, we’re in, and we want to be first!”

The New Mexico Lottery also wanted to launch it as soon as possible, targeting a ticket launch in early 2022. “We immediately started to work with Alchemy3. They’re very collaborative. We talked about what the ticket and promotion would look like. We were able to use David Bromstad’s likeness on the ticket itself. We also were able to use clips of him in advertising, so we could really convey the feel of the show,” Cabell said.

“He is the show!” Alchemy3 President Jeffrey Schweig said. “David represents the dream of owning the perfect house, and he’s handing you a key to whatever your lottery dream home is.”

Getting the rights to the MLDH property wasn’t the only hurdle, just the first. The New Mexico Lottery has a 30% return mandate and the industry’s lowest prize payouts on scratchers. Most top prizes for them are in the hundreds or the low thousands.

“So, how do we afford a house?” Cabell asked.

Cabell wanted to avoid buying real estate. Not only would it prove very difficult, but then players might not have the choice to get their version of a dream home. In fact, during initial research, many players indicated that they wanted to renovate their own homes rather than purchase one. The ticket had to offer a cash prize. 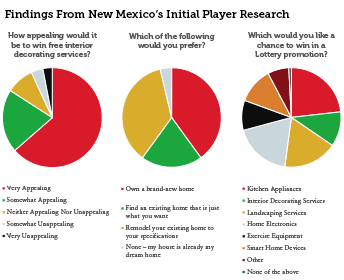 The Lottery could make the top prize for the ticket $100,000. “That is huge of us,” Cabell said. “But that doesn’t really translate into a dream home.”

The team was at an impasse, but a serendipitous solution, SCA Promotions, called them. “They didn’t know we were doing dream home. They were just reaching out, and they mentioned their prize indemnity offerings, which they’ve done for Scientific Games and their big, linked promotions,” Cabell said.

The Lottery could pay a fee and purchase prize coverage from SCA, which allowed the Lottery to leverage its prize budget and get a bigger bang for its buck. With a probability second chance game the finalist can win a prize from $100,000, $250,000 $500,000 and up to $1,000,000 CASH. Any prize exceeding $250,000 will be paid through SCA’s prize coverage agreement. Jackie Walker, Director of Business Development for SCA Promotions comments, “We are so excited to help New Mexico bring this 2nd chance program to life and enhance player engagement through a probability game to win a life-changing prize. I love it when a good plan comes together!”

A second chance drawing would select the finalist. It wanted to make entering the contest easy, incorporating Alchemy3’s Collect’n’Win technology into the ticket. All players needed to scan a code on the back of the ticket. “They don’t have to even download an app. We didn’t know we could do that before working with them. We thought it would be complicated, but this just works through a mobile browser,” Cabell said.

The New Mexico Lottery staff put a lot of effort behind the ticket. The enormous top prize for the New Mexico market plus the high-profile property meant the game should appeal to core, infrequent and new players. The Lottery intended to make the whole state aware.

First, the Lottery needed to make sure players would notice the ticket. They opted to use Scientific Games’ Sparkle printing to catch players’ eyes. “It looks very rich, very blingy,” Cabell said.

Second, the Lottery needed to ensure all retailers had the product when it began to advertise MLDH. During the pandemic, the Lottery transitioned from having an initial allocation the first week of every month to a slow-release schedule. It would supply retailers with new games when needed.

But not for this game. “We wanted to flood the market with it like we used to do, and so, we did put that game out with an initial allocation for the first time in two years,” Wilkinson said.

Third, they wanted to get retailers to support the ticket, so they needed to get them excited. They offered incentives for both management and clerks.

Management could win cash prizes. During the first two weeks, every pack of activated tickets gave the business an entry into a store drawing for $500. There were separate drawings for independents and corporate chains.

On the other hand, clerks could win t-shirts and other prizes. Packs have house keys on them, which would let the retailer call in and enter a separate drawing. One retailer from each of the 14 sales territories will win lottery prize packs for their store. “It is a limited investment, but clerks are certainly more engaged in something like that because they can win a bundle of t-shirts and duffel bags,” Cabell said.

Fourth, the Lottery wanted vast player awareness of the new game. They ran two different 30-second TV ads and a 15-second ad. Careful not to ignore any player base, the ads ran in Spanish and English.

Finally, the Lottery did a lot of in-person events, some small and some large. The Lottery utilized its INTRALOT field staff representatives (FSRs) to hold wheel spins at retail locations. Each FSR held a minimum of three MLDH wheel spins in each territory. 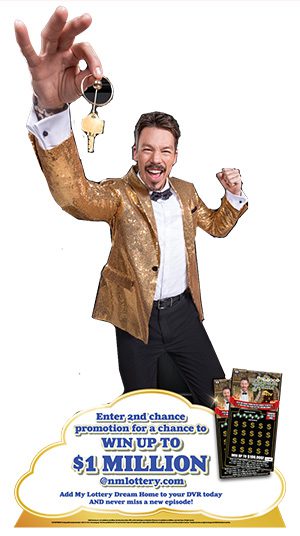 In April, the Lottery participated in the Albuquerque Home & Garden Show, given the connection with MLDH ticket and HGTV. “It hasn’t been a great fit for us in the past. But since we have this ticket, it seemed like a great fit. Wendy Ahlm, Director of Advertising and Marketing, and her team put together a gorgeous backdrop of a staircase of gold. It looked like you’re in a mansion! Players had a chance to spin the prize wheel pose for photos with a life-size David Bromstad, or play the giant ‘Key Game’ for a chance to win Lottery Bucks. We have great pictures of people that just love the show and want to be part of the opulence,” Cabell said.

The Bromstad standee was such a hit that it was at every event and even made its way on TV. “I interviewed on New Mexico Living, a local Morning Show. We talked about the ticket and the prizes with the ticket. But I also took a David Bromstad stand-in with me,” said Ahlm. “It was fun to stand him between the show host and me, just hanging out with us while we talked about the game.”

Players have loved the ticket. In its first week, it indexed at 193. After 10 weeks in the market, indexing was 123. The Lottery anticipates it will be in the market for 15 to 16 weeks. When the game sells out, the Lottery will hold the grand prize drawing.

The second chance drawing entries have also been solid, with 50,000 entries for the first drawing. “Last week, we had a 7% increase in the player base and a 15% in the ticket center, which for week 9, to see the game still building strength, we’re really excited about it,” Wilkinson said. 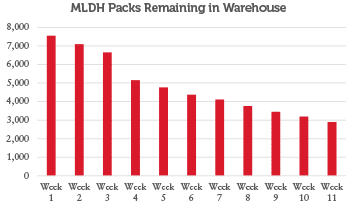 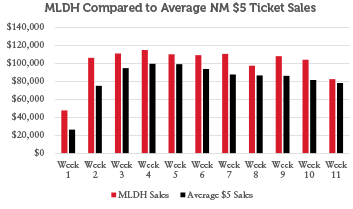 Players also appear to enjoy the ease of entering the second chance promotion. “We’ve had no calls or questions about it. They totally get it. Alchemy3 is doing our customer service for us and seems to have answered all of the players’ questions quite well,” Wilkinson said.

“We feel we have a very special game with My Lottery Dream Home. The promotional and prizing opportunities we’ve included add up to something never before offered. Plus, we’re honored to be the first to introduce a game featuring this lottery-centric licensed brand!” David Barden, New Mexico Lottery CEO, said.