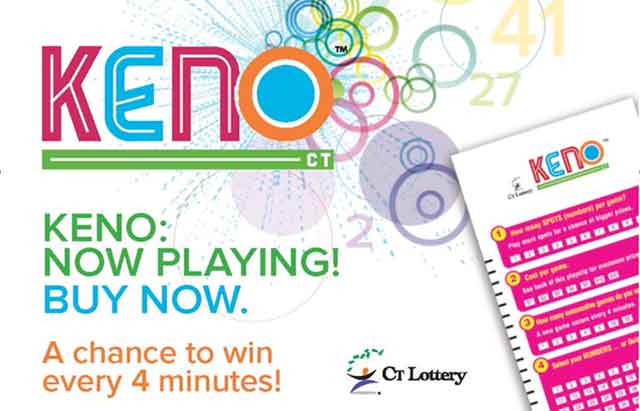 Connecticut Lottery Corporation’s slogan for Keno celebrates the fact that “It’s a whole new kind of fun: A chance to win every four minutes.”

Keno is sold through the network of nearly 3,000 lottery retailers. The lottery has recruited social establishments, such as bars and taverns, to sell Keno. The sales success reflects on the retail program.
“We have a great staff. I am not going to sugarcoat it. They are putting the game out there. They are explaining the benefits to retailers and they are buying in,” said Farricker.

The CT Lottery is using systemwide promotions to expand Keno’s appeal and audience. It ran a holiday promotion on December 30 called “Lucky New Year.” There was a 40% increase in Keno sales during the 4-hour promotion. Daily sales totaled $96,000 for this limited-window promotion.
“We offered them a benefit—spend $10 on Keno and get a free Lucky for Life ticket,” said Farricker. The lottery funded the free lottery giveaway through its unclaimed prize pool.

He said the Keno promotion benefited two audiences. “Our player gets an opportunity to get a free Lucky for Life ticket,” said Farricker. “But it also helps to educate our new retailers (like the pubs and taverns) on the benefits of selling other lottery tickets.”
This seasonal promotion resulted from promotions run in the fall. “We had a couple of smaller-scale tests to get a sense of what our players would respond to,” said Farricker.

The CT Lottery is also experimenting with varying the “skins” for Keno to keep the game more visually arresting for players who watch the monitors at retailers.

“The reality is people typically are looking down at their phone when they are sitting in a bar. Now they are looking up at the Keno skins in between drawings. We are getting a lot of good responses from players,” said Farricker.

Keno skins have included themes such as football, darts and outer space. “These skins have become a topic of conversation on top of the game itself,” said Farricker.

In terms of the lottery’s fiscal 2017 sales performance, the new Interim CEO said the agency is on target. He describes the $1.6 billion Powerball jackpot in January 2016 as a big boost.

“When we have a board presentation, the month of January 2016 goes off the screen and onto the ceiling due to the sales,” said Farricker. “But we are a 12-month organization. It will all even out in the end. We are continuing to go from strength to strength. We are very happy with our new initiatives. We intend to stay a leader in this industry.”