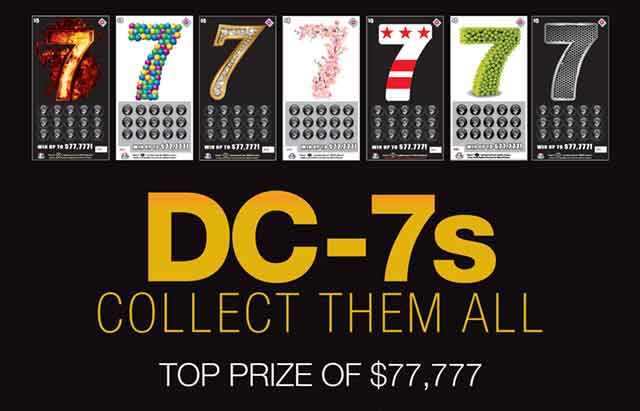 Why is number seven considered lucky? According to U.K.’s Daily Mail, “stop any person in the street and ask them to choose an odd number between 1 and 10. More often not, they will say the number 7. For ‘lucky 7’ is the world’s favorite number. There are seven days of the week, seven colors of the rainbow, seven notes on a musical scale, seven seas and seven continents.”

The D.C. Lottery experienced sensational success with its DC-7’s scratcher, which ranks as the most successful $5 ticket sold in the last two years. The DC-7s ticket averaged $12,181 in weekly sales during its 30-week run.

“The ticket indexed at 130. It ended up being our highest indexing $5 instant ticket game in over two years,”reported D.C. Lottery Marketing Director John Gorman. “It even ended up outselling both our “You Decide 2016” and “Chuck Brown” scratchers. Both of those games were major launches for the D.C. Lottery and received a lot of media support. And they were both hugely successful through their first 12 weeks on the market. But where You Decide 2016 and Chuck Brown came down to earth after three months, DC-7’s just kept on chugging along. It showed significantly legs through its entire life cycle. And it didn’t receive near the media support that the other two spotlight games did.”

The lottery credits the scratcher’s sales performance on a confluence of factors.

“First, you pretty much can’t go wrong with a 7’s themed ticket. They’re hard to screw up so that’s a good starting point,” explained Gorman. “Then, what we did was work with Scientific Games International (SGI) to take what started out as an internal exercise for them and turn it into a 21-scene game that featured a variety of interesting and eye-catching different 7’s themes. Players love that variety. They like discovering what other scenes are out there that they haven’t found yet. It encourages repeat purchase. It keeps them loyal to that game. And they talk about it amongst themselves. Finally, the second chance contest we developed leveraged the collectability element that we have seen work over and over again here in D.C. Players earned an entry into the second chance contest for each ticket entered but they earned 100 bonus entries for collecting all 21.”

In fact, DC-7s had the highest participation of any second chance contest of any ticket at any price point ever in D.C.

“We are always thinking of new ways to make our second chance contests more engaging, to add more dimension to the process. What we learned with our two Collect N Win App launches is that players love the gamification of the second chance contest process,” stated Gorman. “It keeps them more engaged. It extends the time they spend with us. With DC7’s players were presented with a screen showing all of the 21 scenes only they were grayed-out. Each time a player entered the code for a new scene it would light up on the screen. And after they collected all 21, they were rewarded with 100 free bonus entries into the contest for a chance to win $77,777. On some psychological level, many of us are lured in by the challenge to complete a collection. It is satisfying on some level. DC7’s leveraged that very human instinct and it turned out to be our most successful instant ticket second chance contest ever with 28% participation.”

Gorman doesn’t rule out a “son of 7s” ticket in fiscal 2018. “Although we are always wary of sequels, this is one concept that lends itself to being reinvented over and over again,” he observed. “There are almost an infinite number of different ways you can design or theme these 7’s.”