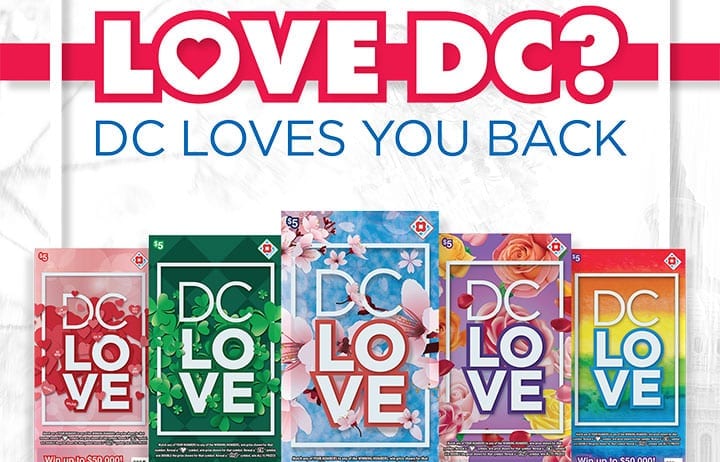 The DC Lottery is feeling the love from players! Its new $5 scratcher, called DC Love, is indexing at 114, which is out-indexing its last major $5 release, DC-7s, at the five-week mark. “We believe this ticket is destined for great success!” said DC Lottery Executive Director Beth Bresnahan. “It has only been in market for just five weeks, but the numbers are strong. It has an index score of 114, which is higher than our last major $5 release, DC-7s. That game had a score of 105 at its five-week mark.”

“In follow up to our highly-successful ‘Neighborhoods’ campaign, which showcases our love for the city of Washington, we designed another DC iconic product,” said Bresnahan. “As an extension to the ‘Neighborhoods’ campaign program, we wanted to highlight the reasons and seasons people show love in DC. Each DC Love scene features a celebratory time in which Washingtonians come out in full force to have fun in the city.”

A new scene will be released monthly from February through June. “February is a Valentine’s ode to Go-Go music; March features lots of luck for St. Patrick’s Day; April is blooming with cherry blossoms; May is emblazoned with the state flower, the American Beauty rose, for Mother’s Day; and, June’s rainbow imagery celebrates Capitol Pride,” she explained.

DC Lottery created the “DC Love”song which is used in its radio commercials. “We wanted a jingle that would reasonate with our audience as well as break through the clutter,” said Bresnahan.”The song is upbeat with a Go-Go beat flavor and celebrates DC. There is an original :60 radio spot and five :15 radio spots—one for each pulse.”

It also has a strong digital presence on social media and online. “To further strengthen our digital presence, we utilized several of our media partnerships to promote the campaign, which is helping us reach a broader audience,” she noted.
DC Lottery is also capitalizing on the city’s love of its “furry friends” with the new $2 Lucky Pets scratcher. It is indexing at 119. Sales totaled $236,000 after five weeks of sales.

“With an estimated 250,000+ cats and dogs residing in the District, the DC Lottery wanted to find a way to connect and create a bond with their owners. The Lucky Pets scratcher was designed to reach this continuously-growing market by celebrating our furry four-legged friends on a ticket, while still catering to our core players with robust cash prizes,” said Bresnahan.

The $2 ticket features eight different breeds of cats and dogs plus the chance to win $5,000 cash instantly. IGT printed the ticket.

“We created a humorous radio spot that focuses on the lengths we go to cater to our pets that blitzed top-performing stations,” reported Bresnahan. “Two of the participating radio stations ran social media contests in which Lucky Pets tickets and other prize packs were awarded.”

DC Lottery also ran a Lucky Pets contest that offered the chance to get your cat or dog featured on the second pulse of the Lucky Pets scratcher. “The second pulse will launch this fall as a $1 game and will feature two winning cat and two dog images from the 345 photo entries submitted,” said Bresnahan. Player’s Club membership was required to participate in the photo upload contest. “We hope that this will be the beginning of a long relationship with our pet loving customers,” she noted.

DC Lottery, along with its ad agency MDB Communications, developed a multi-faceted, multi-channel advertising campaign to support Lucky Pets. “It is not often that we would put so much support behind a game at the $2 price point, but our goal with this ticket is to also engage audiences beyond our traditional players and connect over our love of pets. Accordingly, our strategy included radio, print, digital, and out-of-home advertising, as well as a heavy social media presence,” said Bresnahan.