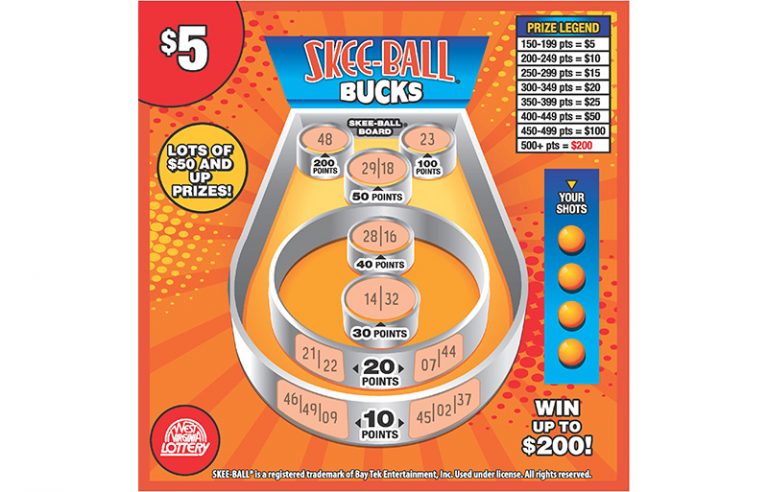 Skee-Ball can stand the test of time any place, anywhere. Skee-Ball fans love their game. And this was proven once again in West Virginia.

The West Virginia Lottery launched a $5 Skee-Ball instant ticket for the first time on March 30, 2021.

The price point was dictated by the design. “The game and play of Skee-Ball fit better on the 6” x 4” $5 tickets we sell,” said Michael Thaxton, Product Development Manager, West Virginia Lottery. “There was a need for an easy to play ‘extended play’ game at the $5 level, and this had a fun play twist with the scoring and a bit of nostalgia.”

Initially, the lottery planned to stage real Skee-Ball contests at outdoor events. “We were looking to maybe do some sort of non-skill game featuring Skee-Ball at the State Fair. However, the game has been selling so quickly that we were not sure we would have enough stock of the game and decided to not tie directly to a single game at the fair this year,” said Thaxton.

Part of the reason that players react so positively to nostalgic products, like Skee-Ball, is authenticity. “If the ticket art and play is kept as true as possible to the licensed product, players generally associate positive memories of the product with the game,” explained Thaxton. “With life being so hectic and fast-moving, something as simple as a well-thought-out nostalgic game can make a player smile for a bit.”

Sales are strong. “We are averaging about seven cents per capita at 15 weeks,” said Thaxton.

The game is also indexing well. “We generally look at the product line as a whole, watching weeks of sell-through and average sales by game. However, our vendor does index our games for annual review. Skee-Ball Bucks indexed at 134,” said Thaxton.

West Virginia Lottery also used the free version of Skee-Ball which Alchemy3 provided as part of the licensing agreement. This allows players to play Skee-Ball on the lottery’s website. “We did use the digital play Skee-Ball with leader board as a free play for our players. There were no prizes associated with the free play,” said Thaxton.

Players responded positively. “The interactive game attracted 3.5 times more attention than the Skeeno promotion, with 65% of players engaged from their mobile device with a median engagement of two minutes and 12 seconds,” said Thaxton.