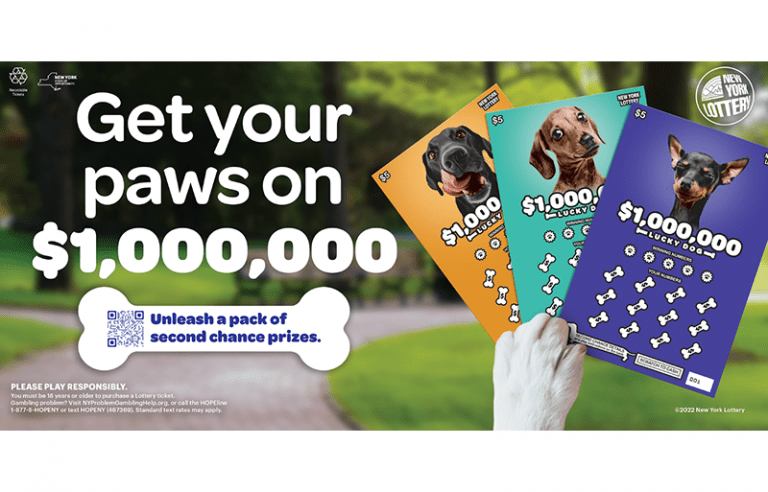 The slogan for the New York Lottery’s new Lucky Dog Scratcher is “Get your paws on $1,000,000. Unleash a pack of second chance prizes.”

With a pet-centric theme and a $1,000,000 top prize, it is sure to attract the interest of “hoomans” and their canines.

“We hope to surpass the success of our $5 Scratch-off Game BACON! which indexed about 20% better than average. $1,000,000 Lucky Dog has a robust second chance program and a social media contest, so we hope to see engagement levels in those areas that exceed recent campaigns,” said Rich Oettinger, Director of Marketing & Sales, New York Lottery.

The lottery has launched three pet-themed Scratch-off Games in the past 10 years. Two indexed 12% above average and the other indexed average.

The Lucky Dog scratcher features 12 different dog images although the initial plan was five images.
“The images used on the tickets are stock photos chosen from dozens of options presented to us by our advertising agency. As for how we chose them, it was extremely difficult to narrow it down, which is how we ended up with 12 scenes from our original thought of five. Our primary goals were to capture their personalities and represent dogs of all sizes,” said Oettinger.

The price point for Lucky Dogs is $5. “Our annual plan had an advertised $5 price point ticket placed on the schedule for April before we came up with the theme,” said Oettinger. “Many of our Scratch-off Game advertising campaigns are for $5 games that are developed in-house. With a goal of attracting regular players and bringing in occasional and new players, the $5 price point has wide-ranging appeal and an exciting top prize of one million dollars that players can’t wait to get their paws on.”

The game is supported by a TV ad that shows 12 dogs hanging out of the window of a stretch limo. The tag line reads: “Get your paws on $1,000,000.” Inside the limo, the dogs are treated to treats, such as a cookie display with a variety of delectable bones.