“The extension of our long-standing Set for Life brand into a $20 offering, called Super Set for Life, certainly exceeded our expectations last fiscal and contributed significantly to our year-over-year growth. We sold this ticket alongside our $4 Set for Life staple game and no cannibalization was realized. Our other $20 games also weren’t negatively impacted, so Super Set for Life sales were truly incremental.”—Merrill Fullerton, Senior Brand Manager, Instants, Atlantic Lottery Corp. 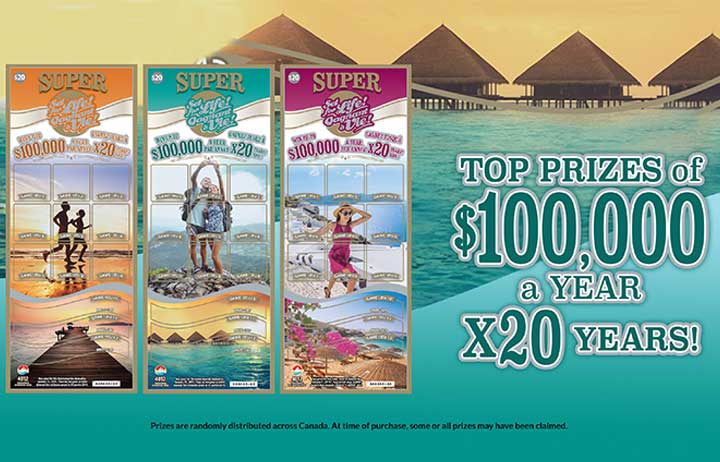 “In fiscal 2018, the addition of a special edition $20 Extreme Crossword ticket to celebrate the 20th anniversary of our Crossword family of games had the biggest impact. This ticket contributed to the Crossword brand growing 10% versus the prior year, and resulted in zero cannibalization to the other price points in the family ($2, $3, $5 and $10). It was so successful that we decided to launch it again in fiscal 2019. We had incredible success in fiscal 2018 with the addition of free ticket prizes to our $1, $2, $3, and $5 variety games. We saw increases in redemption of 1x money back prizing when we added the free tickets, resulting in faster turnover of inventory at retail. We’re continuing this strategy in fiscal 2019.”—Heather Tryon, Category Manager, Instant, B.C. Lottery Corp.

“Our Crossword category does extremely well in California. We offer them at $3, $5, $10 and $20 price points. In FY18, they made up about 25% of all Scratchers sales or $1.27 billion. Our best-selling $10 ‘Mystery Crossword’ has been in market since October 2015 and has consistently brought in $7 million–$9 million per week. Due to the success of Mystery Crossword, we launched our first $20 Crossword game in August of last year. Our second one recently launched in June of this year. These games have provided steady growth in incremental sales to the $20 category overall.”—Liz Furtado, Chief, Scratcher Products, California Lottery 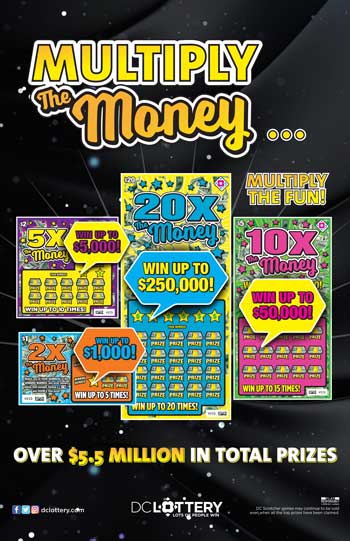 “So far, our Family of Games: X The Money series have done tremendously well for the DC Lottery. Usually, we see a small dip in sales around the beginning of the summer; however, the family of games have boosted sales and have enabled us to start the summer months off with strong numbers.”—Stephen Cooke, Instant Product Manager, DC Lottery 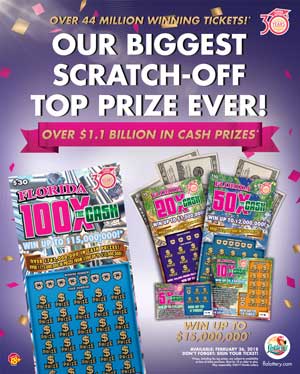 “The reintroduction of a $30 price point made the biggest impact on our Scratch-Off sales last fiscal year. We strategically planned the launch to tie in with our successful FLORIDA X THE CASH family of tickets ($1, $2,$ 5 and $10) introduced in January of 2018. Printed on eye catching holographic paper featuring the Florida Lottery logo in 3D, sales of the $30

game shattered our expectations as it became the best-selling ticket of the year with a $34.27 million week and propelled us to eight straight weeks over $100 million!”—Justin Rock, Director, Product & Research, Florida Lottery 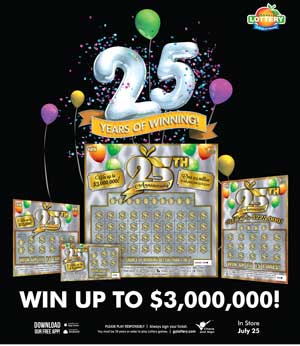 “We had a really great year and several outstanding game launches. We celebrated our 25th anniversary this year with the launch of a 25th Anniversary themed family of games. As a family, these were our highest indexing tickets for the fiscal year. Initially we launched a $1, $2, $5 and an oversized $25 ticket. Because of their success, we decided to develop a $3 ticket later in the year to continue the celebration.”— Meghan Dondero, VP of Product Development, Georgia Lottery Corp.

“In December 2017, we launched our first $50 Scratch-off game. It performed incredibly well—so much so that we increased our forecast twice before the end of the fiscal year. The game, ‘Ultimate Multiplier’ was designed with two $5M top prizes and three $1M prizes and included over $152M in total prizes, many of which were loaded into the $100 to $500 prize levels for added retail excitement. Multipliers are strong performers in Indiana; we coupled the multiplier concept with a key number match game. The artwork was black with fluorescent blue, yellow and pink. And while the game name was different from our multiplier family that launched two months later, the art work and play style was designed to be similar.”—Melissa Pursley, VP Marketing & Product Development, Hoosier Lottery

“The $30 price point far and away pushed our sales ahead this fiscal year, including the combined power house of $30 Ultimate Riches and $30 Colossal Crossword. Our $10 Crossword has also been a great performer for each of the last four fiscal years, with an 11% increase for fiscal 2018 despite recent competition from the new $30 Crossword.”— Deirdre Demmerly, Instant Ticket Games Manager, Iowa Lottery

“There were three strategies that had a strong impact on instant sales in Kentucky. The first was the introduction of the family of games concept starting with Holiday Games. Secondly, every launch received media support with Bob Newhart reprising his role of Elf for our Holiday spot. Sales for the Holiday family were up +60% over the previous Holiday game package. Finally, prize structures were reworked to create a stronger differentiation between price points and print runs were increased to provide stronger prize call outs. Still a work in progress but the changes are having a positive impact on sales.”—Tom Delacenserie, President & CEO, Kentucky Lottery Corp.

“Our strategy was to focus on 25-34 age casual players by offering a good proportion of targeted themed tickets that have an emotional benefit. The objective is to create a positive experience towards scratch tickets. We also launched strong classics products to get a good balance and to please our core players. The good mix of classics and one-of-a-kind products contributed to deliver the exceptional results of FY18.”—Anne-Marie Voyer, Department Manager, Product Management & Development, Loto-Québec

“Four key factors have contributed to the success of our FY18 instant ticket sales: 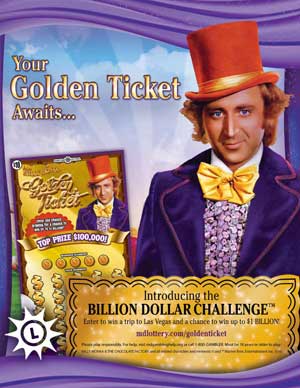 “Our limited edition “$50, $100 and $500 Blowout” ticket, loaded exclusively with prizes of those amounts, was a smashing success, lifting our already strong $10 price point to another level and driving what had been virtually flat year-over-year instant sales to an approximate 2% increase over fiscal 2017. This was our first ticket featuring this type of prize structure. Our players and retailers have demonstrated a high demand for another ‘Blowout’ game and we are exploring concepts for a new ticket in fiscal 2019.”—Lauren Luttrell, Instant Product Manager, Massachusetts Lottery 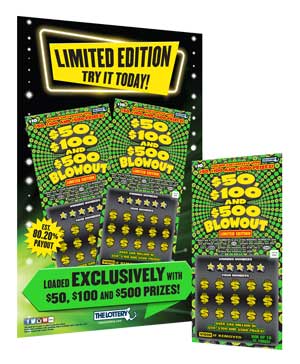 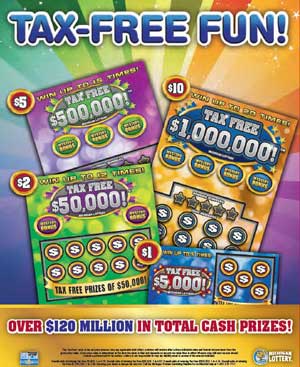 “At the tail end of FY17, we launched a new $25 ticket. Previously our $25 had a payout of almost 82%. We decided to lower the payout to just under 80%, increase the length from 8 inches to 10 inches making for a bigger play area, and glam it up! Our ticket sales surpassed all previous $25 ticket sales, our profitability increased, and the cannibalization of the $20 was less impactful than previous $25 launches!”—Kelley-Jaye Cleland, Director, Sales & Product Development, New Hampshire Lottery

“The New York Lottery introduced two low-top-prize games at the $10 price point during 2017-18. Hit $600 and Fast $600 both had terrific sales, indexing at 125 and 137 respectively. More important though was the profitability of these games. Each was designed at 65% payout differing from most of our $10 tickets, which are designed at 73%. With a top prize of $600, a typical run of 15MM offers overall odds of 1 in 3.8 and odds of winning the $600 top prize of 1 in 618. These $10 games have established a solid following among New York Lottery players.”—Gweneth Dean, Director, Lottery Division, New York State Gaming Commission

“Two things that had the biggest impact on our instant sales in FY18 were the introduction of the oversized ticket and the exclusive prize level game. Both of these games were introduced as $10 game, which resulted in some pretty significant growth at that price point. The incremental facing that the dispensers for the oversized games create will present some opportunities for us to provide players with new and unique value propositions in the future.”—Randy Spielman, Director, Product Development, North Carolina Education Lottery 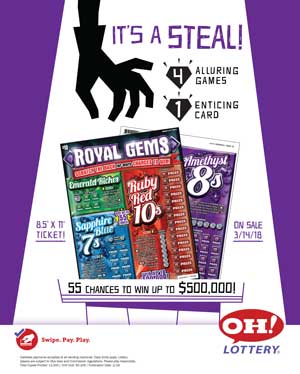 “Early in FY18 we were seeing slower sales in our $10 category compared to the previous fiscal year. By the second half of the fiscal year, we made some changes to the $10 category and in March introduced a new $10 Gigantix®, Royal Gems game. We were able to bring the $10 category deficit down from $22 million to about $2.3 million by the end of June.”—Ronald Fornaro, Instant Ticket Product Manager, Ohio Lottery

“The change to our law and our re-branding strategy had the biggest impact on instant sales for the year as we realized an 89% increase from the prior year. Not only were we finally able to launch our first $10 Scratcher but we were also able to increase the payout percentage among all price point categories. The $10 category was obviously a large portion of sales for the year but we did see positive increases in all other price points as well ($1 up 40%, $2 up 65%, $3 up 43%, $5 up $20%).”— Brandie Reisman, Marketing Manager, Oklahoma Lottery 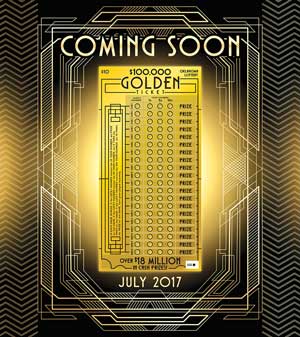 “Our new, innovative game The Big Spin has had the biggest impact on our INSTANT sales for fiscal 2018. The Big Spin brought a whole level of excitement by providing players with three fun ways to win: 1) on the INSTANT ticket, 2) through a CDU ‘spin’ at retail, and 3) by spinning the Big Wheel at the OLG Prize Centre to win a guaranteed prize between $100,000 and $500,000! The game delivered $100 million in sales in the first 29 weeks, and we continue to see great engagement from both customers and retailers.”—Carleen Cameron, Director, Marketing & Production Management, INSTANT Tickets, OLG

“Nearly all of our Scratch-Off’s sales growth in fiscal year 2017-18 came from $10, $20, and $30 games. We have been seeing an upward trend over the years, but never quite so dramatic. This strength provided us the much-anticipated opportunity to add an extra $30 game to our new game line-up, which—alone—accounted for more than $32 million in additional sales in the final six weeks of our fiscal year. The strength can be attributed to a careful restructuring of prize structures to weight and emphasize the 10X-the-purchase price win funding as well as adding winning experience differentiation and variety. On the marketing side, additional individual games were featured across media—most noticeably in easily-refreshed and frequently updated digital billboards.”—Kara Sparks, Director of Products, Pennsylvania Lottery

“For fiscal 2018, Texas’ scratch sales growth of 11% can be attributed to a variety of initiatives including our $5/$10 Loteria games, our 7’s and multiplier themed families and the re-introduction of the $30 price point which had been out of market for a few years.”—Robert Tirloni, Products and Drawings Manager, Texas Lottery

“Our HOT 7s family of games had a tremendous impact on our sales for fiscal year 2018. We performed player research to really understand what players were looking for in a family of games and learned that in Virginia they are most interested in the top prize amount, added value and consistency throughout the family of games. We then developed a prize structure featuring unique $7 themed wins. All of the tickets ($1, $2, $5 and $10) launched 4/3/18 and are indexing between +110% and +131%.” —Terri Rose, Director, Advertising & Gaming, Virginia Lottery 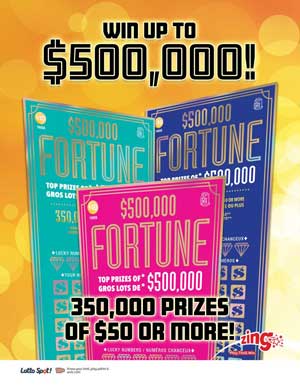