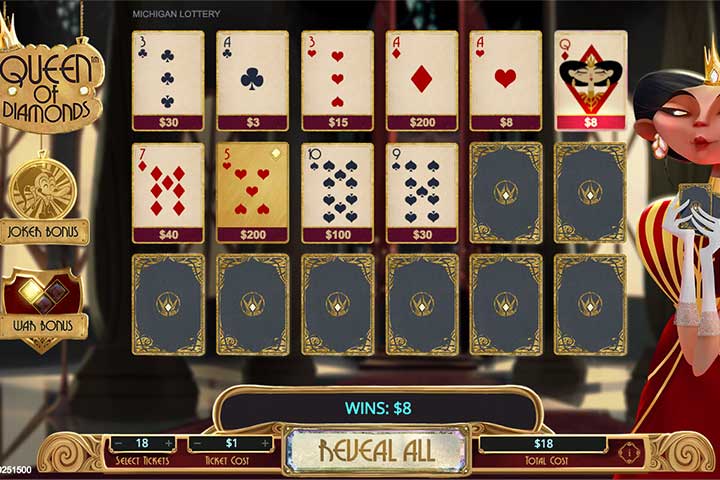 Michigan Lottery launched its iLottery program in August 2014. In fiscal 2018 (which ended September 30), combined online instants and draw games are estimated to reach nearly $100 million in net revenues, which is a 22.4% increase over the $81.7 million achieved in fiscal 2017. (Net iLottery is revenue after prizes and bonuses are paid.)

Michigan’s iLottery program followed the successful strategy of the European lottery industry with a high prize payout. Its average prize payout is 87%. In addition, the lottery offers a wide range of price points (from a nickel to $20) and base games. Like traditional scratchers, Michigan’s eInstants include licensed properties, such as the MLB® “Home Run Riches Online,” as well as families of games.

“We’ve learned a lot about what we can do online,” said Shannon DeHaven, Deputy Director, Digital Operations, Michigan Lottery. “We’ve found that similar to retail, families of eInstants has broad appeal and we look forward to growing that category in 2019.”

“Queen of Diamonds was announced as the top performing eInstant game in the world last year,” declared DeHaven. “We recently hit a milestone of $200 million in bets since its launch in 2016. We have since added a King of Clubs game which is another top performer.” Next Michigan is planning to launch the Prince of Hearts to expand the royal family of games.

Michigan Lottery led the world with $78.7 million in total handle for Queen of Diamonds in fiscal 2017, according to La Fleur’s 2017 Best eInstant Games survey. There were six different price points ranging from a nickel to $2.

Families of VIP eInstant games also work well. DeHaven said the Michigan Lottery first launched VIP Black in 2015. It then expanded the family with VIP Gold in 2017 and will soon introduce VIP Platinum. She said the Digital Games Program manager, Victor Marmorstein, takes his cue from the traditional side of the business where sales for scratcher families are booming. “Our digital games team regularly collaborates with our traditional games team,” she reported.

On the draw side for iLottery, a key initiative is to launch a modernized subscription product. U.S. lotteries typically sell lotto subscriptions as a bulk purchase running for 26 weeks or 52 weeks. “We are working on creating a subscription that allows players the ability to automatically purchase jackpot game tickets for an indefinite amount of upcoming drawings, billed on a set, recurring date,” said DeHaven. “The product provides a unique proposition to players by ensuring they will never miss a drawing. Subscription businesses are exploding. This is an easy way for consumers to have access to products they love and technology allows us to deliver it conveniently.”

Most recently, Michigan Lottery added a “Combos” option to online draw-based games. She explained that players of daily numbers games like to “wheel a bet.” As an example, wheeling a Fantasy 5 bet could involve picking 10 numbers and generating a ticket for every combination of those numbers.

“It’s still very early but we were able to market the feature when the Powerball jackpot was over $220 million and the results were amazing,” said DeHaven. “Combo purchases represented nearly 10% of sales for Powerball that day. I think the feature will provide a huge upsell opportunity, especially during jackpot runs.”

Offering player bonuses is also a key component to building strong iLottery sales. DeHaven said while there are several bonus options, there are two key bonuses Michigan Lottery often uses. “We offer a match up bonus to encourage new registrants to try online games,” she explained. “Currently, we feature a 50% match for all new account sign-ups. For example, a new player who deposits $100 receives a $50 bonus.

“Free games are one of our most popular offers,” added DeHaven. “Among other retention strategies, we use free game offers to encourage current players to try new games.” The lottery can also mitigate for a bad player experience by sending free games of Instant Football Payout or other eInstants that offer the best odds to increase the player’s chance of having a desirable experience online.

“Player retention drives the success of our program. We’ve found that players who experience a payout of 50% or less after their first time playing online are less likely to return,” she explained. “We’ve built an automated communication plan that gives those players another opportunity to try the platform and improve their experience by offering free games with a better chance of giving them that winning experience they are looking for.”

“iLottery affiliate marketing is a new territory. Most of the affiliates that have signed up are from the European market,” said DeHaven. “We are working with our partners to serve up great conversion funnels through their websites or other marketing content. The program helps expand our iLottery awareness and helps us capture a whole new user base. ”

Michigan Lottery affiliate partners are paid on a revenue share model. They receive a commission on net win produced by players they’ve helped the lottery to acquire. DeHaven believes the affiliates will be key in expanding the iLottery program. “We’re working on a collaborative partnership with each affiliate in order to learn from each other and continue to grow,” said DeHaven.