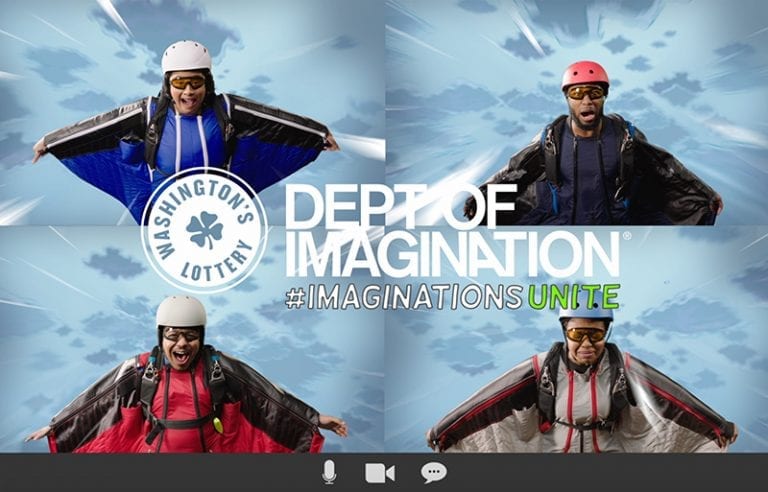 Washington’s Lottery is taking a new direction with The Department of Imagination® (DOI) branding campaign with its ad agency Wunderman Thompson. The new campaign is Imaginations Unite®. The hashtag is #ImaginationsUnite.

“This year’s campaign is to inspire groups of people to share their imaginative ideas with each other, whether it be family, friends, relatives, neighbors, coworkers or even complete strangers, and our eventual goal is to move them from ‘co-maginating’ about a win and transition them into playing together in a pooled community style play,” said Randy Warick, Assistant Marketing Director, Washington’s Lottery.

The lottery chose four different scenarios in this series of new ads for the campaign. “We started things off with a family, then are following it up with four friends co-maginating about a trip they will all take when they win, then two neighbors who play together but have a secret neighborly rivalry and then three book club friends who look to reveal their inner wants and dreams,” said Warick.

Unlike the previous DOI “Let’s Imagine Together” branding campaign, the ideas are not based on a player’s submission or a composite of players’ ideas.

“This idea is not directly linked to any of our players, but we do get a ton of great inspiration from them which helps us come up with spots we think will resonate with them and make them smile,” said Warick.

A Family That Wins

The first Imaginations Unite TV ad aired in March while most families were still socially distancing due to Covid. The spot focuses on a family contemplating a kitchen renovation.

“We wanted to feature a family for the first spot in the campaign since a lot of families are still stuck at home and wanted to show how engaging in a family discussion around what a lottery win might bring could be a fun and entertaining experience,” said Warick. “The kitchen worked well as a starting point since we wanted to start simple and obvious and have the story take a turn. In our story, the mom introduces the idea and dad hijacks it immediately, then the son throws in something more ridiculous and grandma tops it off with an unexpected twist. We end back on mom as this family brainstorm certainly went far beyond where she expected it and she reins the family back in with the declaration of a family meeting.”

The outrageous alternative solutions include an animated indoor (fire- breathing) grill, outdoor (big wheel) truck and a power tool (for Grandma). “Do I even live here anymore?” asks the mom in disbelief.

The use of animation for what the father, son and grandmother desire adds to the dreamlike quality of this first ad. It may also lead to more social engagement. “That is what we suspect and hope to see in months to come,” said Warick.

Washington’s Lottery is rolling out the first series in the Imaginations Unite campaign over the spring. “The new spots will roll out over the next few months. You will see some social teasers before the spots air in broadcast and connected TV,” said Warick.

In terms of how the new ad campaign is performing, Warick said “it is too soon to tell. We’ve received some great feedback through our social channels and will keep you posted as we get some performance metrics.”

It was no easy feat to create the new TV ads featuring real people. “Shooting was initially delayed because of the pandemic,” said Kristie Christensen, Account Director, Wunderman Thompson. “Washington has been very conservative when it comes to what is considered essential business, so we took the Governor’s mandates and recommendations very seriously. Once we had the ability to go back in to production, we worked with a production company, who helped us create an environment that was safe for all cast, crew and agency/client. There was a ton of prep work that went into to ensuring that every precaution was taken and pages of protocol that were followed. There was an on-site Covid Manager, whose only job was to enforce all guidelines were being followed. It was certainly not a typical shoot, but we are happy to report that there were no incidents of anyone getting sick.”

The DOI’s Lets Imagine Together campaign dates back to 2019. Using the hashtag @letsimaginetogether, Washington’s Lottery asked players to share them what they would do if they won the lottery.

“The catch was, once players told us their idea, The Department of Imagination brought it to life in a big way. For the past two years this campaign has kept sparking player imaginations all over the state and getting people to talk about Washington’s Lottery,” said Warick. “This campaign has shown great success over the past two years, garnering us thousands of engagements from our players while keeping the Lottery brand top of mind,” said Warick.