“These are the experiences that you remember.”

I turned to see John, one of the winners of the Florida Lottery’s second chance Hawaii VIP Trip 2022 Bonus Play Get Away competition. Both of us were completely soaked, taking shelter at the beachside bar as the rain pummeled the Fairmont Orchid resort . . . where supposedly, it never rains, as it is on the “dry side” of Hawaii’s Big Island.

“I’ve never seen so much rain in my life,” I responded as I turn to look over the Pacific. I could only hope my camera equipment had not been waterlogged.

“Well, you’re clearly not from Florida then,” another lottery winner, chimed in.

Everyone erupted into laughter. (Apparently, torrential downpours are a regular afternoon occurrence.) They were right. I wasn’t from Florida and I wasn’t a lottery prize winner, like everyone else huddled under the awning.

Derek Gwaltney, Founder and CEO of Atlas Experiences, offered TLF the opportunity to cover the event he was managing for the Florida Lottery in early September. Fifty Florida Lottery winners were flown to the Fairmont on the island of Hawaii. It was a weeklong excursion where they were treated to the hotel’s famous “Spa Without Walls,” a sunset Catamaran cruise, and the $50,000 Lucky Pik Game Show. Later in the month, Gwaltney and his staff would fly over to Maui to run a second event for the Texas Lottery, where 1,000 winners would get to experience a private Darius Rucker’s concert, island Luau, $50,000 in cash prizes and much more.

But for the Texas Lottery, experiential prizes are proving to be more than a compelling prize.

The Texas Lottery had been looking for ways to fund expensive scratch ticket print options and receive additional marketing/advertising support due to budget cuts. Their solution involves promotions with a two-stage drawing program, with players winning cash and an entry into a second stage contest. It has been used to help pay for licensing fees, cost of prizing, upgraded print features, and marketing support for recent game launches. (Ryan Mindell, Deputy Executive Director, Texas Lottery Commission gave a presentation on the concept at La Fleur’s 2022 Richmond Conference, and it can be listened to here.) But for this strategy to work, players must have an opportunity to win a ‘money-can’t-buy’ prize.

This second chance prize also needs to have mass appeal. The Texas Lottery launches three family games a year, which are the pillars of their scratch ticket portfolio. Combined with Loteria, these games generate about 36% of the Texas Lottery’s sales. Therefore, the prize offered in tandem with these games must appeal to the core audience, which isn’t always the case for experiential prizes.

Atlas Experiences’ Hawaii Dream Getaway prize package aligned perfectly with the strategy. By combining multiple experiences together, like an exotic location with a private concert, the package becomes almost impossible to replicate. “We had to find the right type of experiences that matched that program,” Mindell said.  “I mean, you’re on a mountain in Maui and Darius Rucker is singing you a private song.”

The package also had mass appeal. “I think the model we set up appeals to everyone. It is attractive to core players, but if someone is a Darius Rucker fan and wants to go to Hawaii, then this call-out gives these tickets extra appeal to people who don’t usually play the lottery, but love Darius,” Mindell said. “When you put together a money-can’t-buy package, you keep the people’s interest a lot more and you have the ancillary bonus of fitting within the program that we need. Atlas did an outstanding job.”

Earned media is another critical aspect to the strategy behind experiential prizes. After all, the adage “cash is king” has served lotteries quite well, but in terms of winner awareness, experiences can be much more effective. “Even with Florida residents having the opportunity to win every day through a multitude of games, there is still a misconception that no one wins while playing the Lottery,” Amber Seale, Deputy Secretary of Marketing, Florida Lottery, said. “Our research has shown that real stories from real people generate a greater connection for people.”

Texas Lottery has been struggling as well to encourage winners to take pictures of themselves after claiming a large prize. Many players don’t publicize their cash winnings. “I think if most people won a million dollars, they wouldn’t want anyone to know about it,” Mindell said. “What I think a second chance does, especially experiential; it changes the narrative completely around winner’s awareness.”

If lotteries wanted to deliver an awesome experience to their players to drive social media, Atlas Experiences could not have picked a better location. I’ve never been to a place like the Fairmont Orchid. The lobby and all public areas of the hotel are open air. You never have the feeling of being inside, but rather comfortably enveloped by nature. The hotel has at least six waterfalls, so the babbling flow of water serenades guests wherever they go. The foliage and birds paint the verdant grounds with tropical color—made even more spectacular by contrast. The resort is a green oasis surrounded by a hardened magma desert which gives the island an otherworldly aura. The temperature was always a perfect, and everywhere on the island there was always a breeze, redolent of the ocean. A feast for the senses.

“Winners love to let friends and family know they are one of the few lucky ones that have won, IWON, an amazing once-in-a-lifetime experience with the lottery. Atlas’ strategy is to encourage the winners to share the experience, destination and winning moments created as part of the event. Driving winner awareness for our lottery partners is pivotal in our overall strategy,” shared Gwaltney.

The hotel itself was meticulously managed as well. Every morning, I watched the hundreds of staff prepare the grounds before most guests woke up. They scrubbed the pool, trimmed the wide array of foliage, even performed the Sisyphean task of brushing the sand off the path next to the beach. The  cost of such an elevated vacation is out of reach for most Americans, so the opportunity to experience a 5-star resort is truly a once-in-a-lifetime experience.

Most lottery players pulled out their phones when they first entered the hotel. Everyone wanted to share with friends and family members. One winner said: “I’ve told strangers! I know my local lottery representative. I asked him if he knew who won the contest and he said he didn’t. I told him, well now you know at least one!” From their first steps into the resort, the winner awareness campaign was working perfectly.

One couple encapsulated Mindell’s theory with their thinking. “If I won a big cash prize, I wouldn’t even collect it. I would hire my accountant to do it. I wouldn’t even tell my family I won. But with this prize, I’ve told everyone I know,” Gilbert told me by the pool. 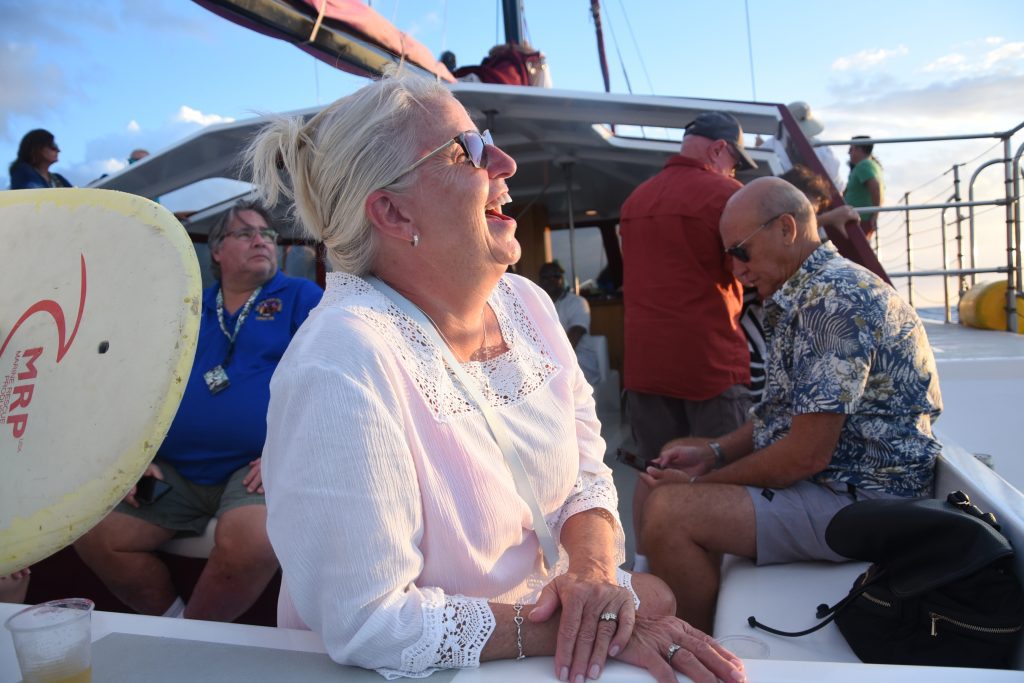 User Generated Content (UGC) is difficult to rely on. Jodi, another winner, was taking lots of pictures, but didn’t want to post them online. She was nervous people would rob her house while she was away. While no one else mentioned this reason, lotteries shouldn’t depend only on UGC.

The Florida Lottery wants a blend of both UGC and Florida Lottery content. “Both are equally important because we’re showcasing these stories on our owned social platforms, while encouraging users to post on their own channels from an earned standpoint,” Seale explained.

In Hawaii, Gwaltney has kept this marketing philosophy in mind with his “IWON” strategy. Winners were encouraged to include #IWON for their own posts to capture as much authentic UGC as possible, and the winners got the message. During the sunset catamaran cruise on September 12th, the group of excited winners started chanting, “We won!”

The Atlas team also hired a videographer and photographer for both the Florida and Texas events. Winners were interviewed about how they reacted when they won, what this prize meant to them, and more. They also captured their experience winning. For the last night of the Florida promotion, the winners were part of the Lucky Pik Game Show farewell Taste of The Islands dinner. After dinner and drinks were served, $50,000 was given away, with the grand prize winner claiming $10,000. The videographer captured the facial expressions of the many who won in real time.

This type of content should prove very useful for Lotteries moving forward, especially the more of it they accrue. The Texas Lottery already has plans on how to use it as part of a long term strategy.  “We want to build a library of these second chance programs to show the people who went to Vegas and won money, who went to Hawaii and met with Darius Rucker, who went to see Brad Paisley, or who went to the Country Music Awards,” Mindell said. “What’s your favorite thing about this experience? What was your reaction when you won? Those are the type of reactions we want. Get them on camera and say I won with the Texas Lottery and I won big.”

Can’t Have a Rainbow…

Perhaps it was unfair to start the article with the unexpected rainstorm—but like a resort oasis in the desert, the tumultuous weather after the Luau festivities only made the rest of the week more memorable by contrast. Winners luxuriated in their massages by the water, poolside drinks, sunset cruise, and cash prizes. The brief weather mishap turned out to be a bonding experience; with everyone laughing, it proved there was no bad luck to be had on a dream vacation.

I don’t think I can overstate how much the winners loved it. For some, it was joyous. There were three wedding proposals during the event, one of which was completely impromptu. One winner was lying awake in bed, and realized he wanted to spend the rest of his life with his partner. Multiple other couples were celebrating their anniversaries.

“It’s amazing that my team had the opportunity to leave their own fingerprint of the lives of our winners and guests in so many ways. I was truly moved more than once during the entire program. Completely rewarding to see all our hard work come to fruition,” explained Gwaltney.

For others, it was cathartic. In January, Dolores lost her 37-year-old son. Four months before that, she lost her dad. Four months before that she lost her mom. Yet, in Hawaii, she proudly wore a pin of her son’s face every day during the trip. “He was alive when I won it though. He was the only one there when I yelped, ‘I won a trip to Hawaii.’ I couldn’t believe it,” she told me, both smiling and crying simultaneously.

For one couple, it was both. They were celebrating their third anniversary and honeymoon. They hadn’t been able to afford a trip after they married because of other obligations. Her mother was trying to help them finance a trip. “This trip has meant a lot because we’ve been through a rough few years,” she said. “My mother passed away a few months before we won. We felt like it was her saying, ‘here’s your trip, now you can have your honeymoon.’”

Everyone was thankful, for the Florida Lottery sending them there and for Atlas Experiences. I heard repeatedly how amazing Derek and his employees were for accommodating any request they could. At the last ceremony, before the gameshow began, one winner stood up to say: “From all of us, thank you so much.”

If lotteries wanted to create an experience that their players will not only remember but share for the rest of their life, then they achieved it.