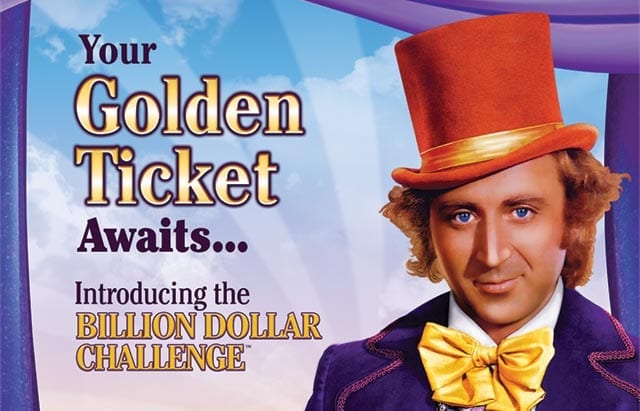 Texas Lottery launched its Scientific Games-licensed $10 WILLY WONKA™ GOLDEN TICKET. The new scratch ticket offers players the chance to win up to $250,000 instantly or enter non-winning tickets into promotional second- chance drawings for the chance to enter the BILLION DOLLAR CHALLENGE™. The WILLY WONKA™ GOLDEN TICKET scratch ticket can be found at Texas Lottery retailers across the state.

“We know our players will enjoy this game and the possibility of finding a winning Golden Ticket,” said Gary Grief, Executive Director of the Texas Lottery. “This is the first time a scratch ticket game has offered the possibility of winning a $1 billion prize.”

Twenty people will win trips to Las Vegas from each of the four promotional second-chance drawings. Trip winners will then participate in the BILLION DOLLAR CHALLENGE™ where they’ll have the chance to play for cash prizes and win up to $1 billion.

The WILLY WONKA™ GOLDEN TICKET is a supersized scratch ticket, measuring 12 inches by 8 inches and features three separate games on one ticket. “Our supersized tickets are very popular with players and we anticipate this game will be successful in generating revenue for Texas education,” said Grief.

In addition, the Texas Lottery achieved $5.068 billion in combined draw and scratch sales in fiscal 2016. This broke the sales record it set in fiscal 2015 and resulted in a total contribution of $1.392 billion to Texas, the single largest annual transfer of revenue to the state.

The growth could be primarily attributed to two factors, another year of strong sales across its entire scratch ticket game portfolio, which accounted for 73% of the lottery’s total sales, and the record $1.5 billion Powerball jackpot that occurred in January 2016.