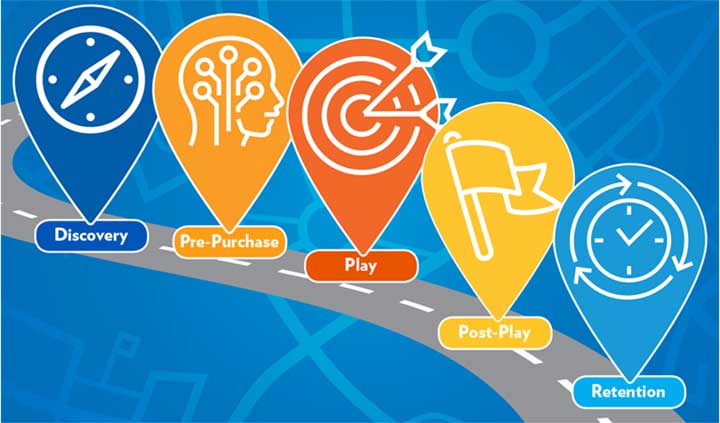 How do you get occasional players to discover—or rediscover—the lottery, and how do you keep regular players engaged?

To assist lottery marketers and retailers in understanding the factors that attract and retain players, IGT has charted the emotional path to play in a new white paper available for download on igt.com/LotteryBlog beginning July 20.

“Speeding the Path to Play” is a compelling visual map in a poster format, plotting the player’s journey from pre- to post-play and signposting key roadblocks and opportunities.

“After speaking with thousands of lottery players around the world, IGT discovered powerful insights into their emotional journey with the lottery,” said Gerard Caro, Senior Director of IGT’s Insights360 group. “At every stage, there are specific moments that can be the difference between keeping or losing a player.”
A Roadmap To Greater Player Engagement

Stage 1 is Discovery.
Players are often introduced to the lottery by word of mouth (76%). In fact, family members are the top-rated source (27%), then friends (17%) and co-workers (11%). IGT’s research shows that the first lottery game ever played is most frequently a Pick 6 Lotto (39%), followed by an instant scratch game (25%), and a multi-state/national game (21%).
“Because more players discover the lottery through other people than through advertising, there’s an opportunity for lotteries to build buzz around new games, jackpots, winners and more by posting shareable stories on social media on the days of major draws,” Caro noted.

Stage 2 is Pre-Purchase.
Excitement and hope peak right before players purchase lottery tickets. During the pre-purchase stage, research shows that players feel lucky and spontaneous: 80% believe “anything can happen,” 76% are “hopeful,” and 68% feel “excited.” Players are also driven by the Fear Of Missing Out (FOMO).
Focusing on the point of purchase is the best way to maximize this opportunity.

To do so, retailers can strategically promote different products and offer non-lottery prizes at different times of the day.
For example, players could be offered coffee/ticket bundles in the morning and snack/ticket packages in the afternoon. In-store promotions could be listed on in-store digital screens.

Players experience a surge of emotions before play, as they anticipate the results. However, IGT’s research shows that these intense feelings are often fleeting, sometimes tapering off before the game even ends. “Speeding the Path to Play” delineates several opportunities to extend players’ feelings of entertainment, such as messaging them prior to play, providing small, non-monetary victories during play, and encouraging social lottery- playing occasions.

Players feel a pull between any negative emotions around the results and a positive feeling of looking forward to the next experience.
“Negative emotions can discourage a player from returning to a game,” Caro noted. At this stage, feelings of hope plummet to 39% (compared to 76% at pre-play). There is also a drastic drop in players’ excitement levels (48% vs. 68% pre-play).

During post-play, retention depends on how players weigh their emotions—win or lose—as they decide whether they want to play again.
“The top barriers to play are poor odds and a feeling of time and money wasted, along with the desire to spend money elsewhere,” Caro explained. “These factors may determine how frequently a player engages with the lottery.”

Lotteries can support regular players at this stage by offering and promoting membership in players’ clubs (currently only 13% of players are enrolled, while 24% are interested in joining) and tapping into players’ desire to purchase online (32%).

To remind infrequent players of large drawings, lottery marketers have an opportunity to use disruptive radio, electronic billboards, and social media messages.
“Speeding the Path to Play” derives from IGT’s most recent Global Study of Player Motivations, a multi-stage, 10-country research protocol conducted by YouGov in November 2016, involving 8,130 adult players and non-players.

To get the full picture of how to retain and motivate players by better meeting their needs and expectations, download your copy of “Speeding the Path to Play” at igt.com/LotteryBlog.