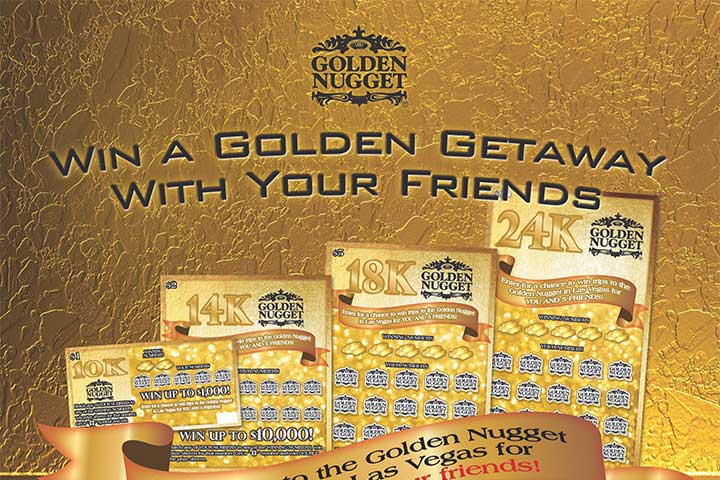 Alchemy3’s Golden Nugget property offers a golden opportunity for lotteries to appeal to a wide section of the population.

Gaming brands have long proven to be popular for instant games. “We know from industry research that there is strong crossover between the various forms of gaming,” he said. “Casino loyalists like and play lottery and vice versa.”

Schweig noted that “beyond the core, Las Vegas as a travel destination is more popular than ever. It’s THE getaway place twenty-somethings who want to celebrate milestone (and sometimes not so milestone) events such as bachelor/bachelorette parties, girl getaways, NY Eve, etc. Since downtown Vegas has been going through a revitalization, more and more people are spending time there—especially young adults. Downtown Vegas has more of a street fair/festival feel and that type of environment is especially appealing to Millennials and Gen Zers.”

Alchemy3’s Golden Nugget brand is really picking up steam—as downtown Las Vegas continues to grow in popularity. “It’s the crown jewel of downtown Las Vegas and a truly beautiful hotel/casino,” said Schweig. “Many lotteries are going to be running the game. Three will be launching end of ‘18, beginning of ’19. Specifically, Oklahoma, Virginia and Texas. There are more coming.”

The Oklahoma Lottery will launch the Golden Nugget brand with four different price points ($1, $2, $5 and $10).

“We wanted to do a family of games with a promotion tied around it and the opportunity just made sense from a brand presentation and promotional relevancy standpoint,” said Jay Finks, Director, Marketing & Administration, Oklahoma Lottery.

With over 100 casinos in Oklahoma, the competition is severe. “It is important we put a good foot forward when presenting themes tied to such a competitive landscape,” said Finks.
The ticket’s design plays off the precious metal theme. “The ticket will be themed across the family of games as a Karat theme,” said Finks.

The Texas Lottery decided to launch a $5 Golden Nugget ticket based on past success for previous Vegas tickets.

“The Golden Nugget concept was tested with players a couple of years ago and there was high interest that was mainly driven by the second chance drawing prize of a trip to Vegas for the winner and five friends,” said Robert Tirloni, Products Manager, Texas Lottery.

The ticket will go on sale in January 2019. Tirloni sees big advantages in using a gaming brand for an instant ticket.

“Gaming/casino brands and games offering trips to Las Vegas have sold well in the past and our Golden Nugget licensed game allows players to enter their non-winning tickets for a chance to win a trip to Vegas with five friends!! We believe this trip package will be well-received and encourage trial and/or repeat play. We are always looking for brands and promotions which will intrigue our players and keep their interest in our products. We believe games such as the Golden Nugget are a key to our continued sales success and revenue generation,” said Tirloni.

Players will be able to enter non-winning Golden Nugget tickets into the lottery’s Luck Zone for a chance to win trips or merchandise prize packs.

The lottery will play off the precious metals as part of the game design. “We’ve combined the casino play themes with rich gold background graphics. It is a sharp looking ticket!” said Tirloni.

The Virginia Lottery is launching its $10 Golden Nugget game as an oversized 8” x 8” ticket. It features gold foil accents to highlight the glamour of the Golden Nugget property.
“Downtown Las Vegas has become a destination for incredible entertainment attracting a younger demographic,” asserted Virginia Lottery Strategic Games Manager Katherine Cundiff. “As the Virginia Lottery looks to appeal to a greater audience by offering more experiential prizes, the Golden Nugget property aligned well with our overall strategic plan.”
“Our belief is consumers will quickly relate the property to the excitement and entertainment Vegas has to offer,” added Cundiff.

Schweig said many lotteries are awarding “buddy trips” where the winners gets to bring five of his/her buddies to enjoy a VIP vacation at Golden Nugget.

The Virginia Lottery will be offering 20 instant wins through the scratcher that provide players the opportunity to bring up to five guests on a VIP trip to Vegas. The ULTIMATE VEGAS GETAWAY is a 2nd Chance promotion where two lucky winners and up to five guests have a 4-night VIP experience.

“Research has proven the Millennial population is incredibly interested in experiences and we hope to appeal largely to this group,” said Cundiff. “We also believe offering group trips for six people, instead of a trip for two, will appeal to the target demographic along with our core players.”