Scientific Games: Good Morning? No Such Thing For GRUMPY CAT® 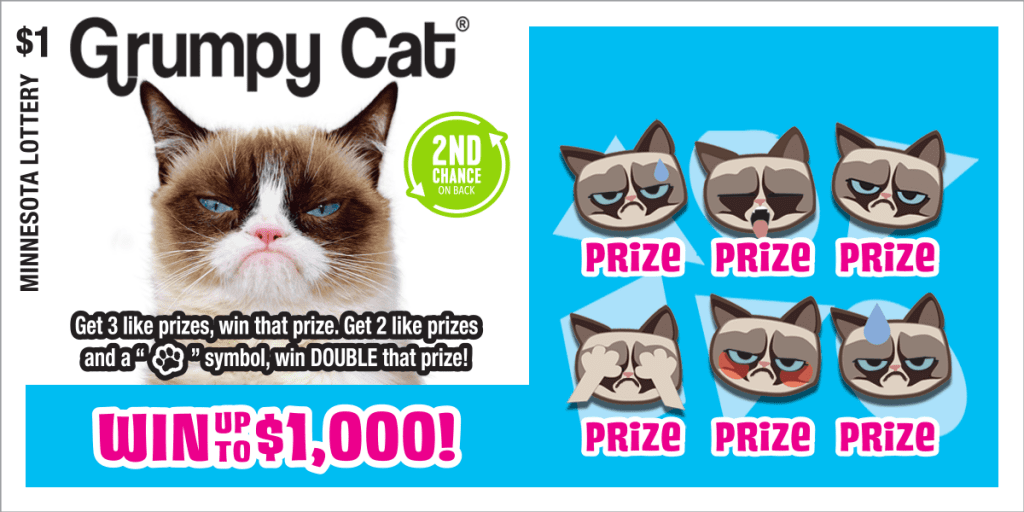 Kidding! Just one of the many, more than funny GRUMPY CAT® memes that are now part of a line of licensed instant games for lotteries in the U.S. and Canada from Scientific Games.

No, really. How in this day and age does a cat with a seriously grumpy face become an overnight sensation that appeals to every generation? And dog lovers? As Ben Lashes, Manager and Agent to the real-life GRUMPY CAT tells it, the story begins in 2012 when Tabatha ‘Tabby’ Bundesen’s cat had a litter of kittens in her house, in a small Arizona town of 250 residents just outside Phoenix.  Some of the cats were adopted by friends and neighbors, but Tabatha’s 10-year-old daughter Chrystal selected one cat she said they just couldn’t let go. And so, the blue-eyed, dwarf cat stayed with the Bundesens, passing ordinary cat days, until Tabatha’s brother Bryan came to visit and took some photos of the cat’s unusual expressions.

Several days later he posted on social media, ‘Meet GRUMPY CAT,’ and went to sleep. When he awoke the next day, the photo had gone viral and the six-month- old cat sat atop Reddit’s coveted page 1. But commenters believed the cat was photoshopped.

The family quickly used a mobile phone to create a video of GRUMPY CAT playing to prove she was, in fact, a real cat—with an irresistibly grumpy face. The social media memes took off, and as they say…the rest is history.

GRUMPY CAT is now six years old, she has a social media fan base of 13 million and her own website with 1.5 million visitors a month. She’s appeared on NBC’s “Today Show” and ABC’s “Good Morning America.” She’s sold more than two million books, drawn crowds topping 5,000, and stars in her own movie.

“We live in a world driven by the internet where many things are fake and exaggerated,” says Lashes. “But GRUMPY CAT is real. She is the ‘X Factor.’ She is like a cartoon character coming to life.”

The big secret, he shares, is that GRUMPY CAT (although she does have her given name), is actually a super sweet kitty that loves to play. Her birthday is April 4th, celebrated by her millions of fans all around the world.

Lashes, a self-described pop-culture obsessed, entertainment aficionado who has worked with other viral licensed properties, believes GRUMPY CAT is a classic, lovable character able to express what we all wish we could say out loud sometimes—but in a way that invokes an immediate smile.

In their travels together, he is continually surprised at how many people who come up to greet them have developed a personal relationship with GRUMPY CAT, who they say has helped them get through the toughest of days. Look for GRUMPY CAT’s cat and dog treats coming soon in 2019. Meow. Or whatever.