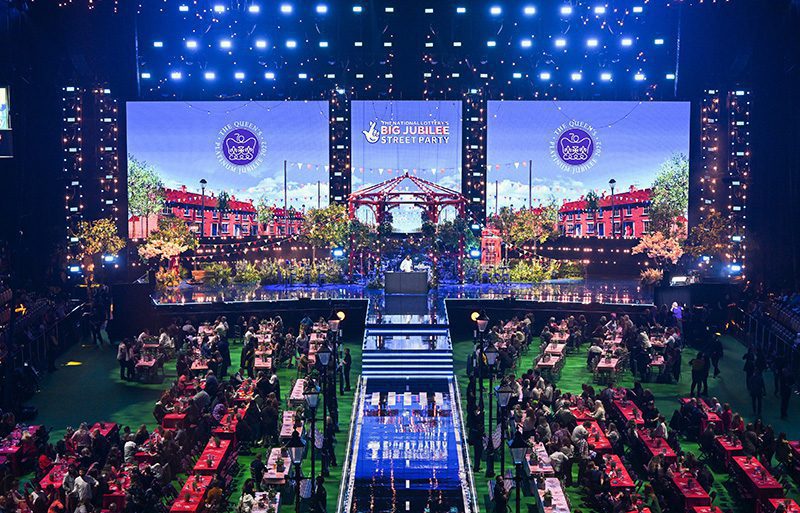 MANCHESTER, ENGLAND - MAY 12: Guests are seated atThe National Lottery’s Big Jubilee Street Party, to celebrate the organisations that have been awarded grants for making a huge difference to communities across the UK. Coming soon to ITV and stv. (Photo by Jeff Spicer/Getty Images for The National Lottery )

Camelot UK Lotteries Limited (‘Camelot’) today announced record National Lottery sales of £4,063.9 million for the first six months of the 2022/23 financial year (1 April to 24 September 2022), breaking the £4 billion mark for the first time in the company’s 28-year operation of The National Lottery and outperforming last year’s total by £102.5 million (+2.6%).

The record performance resulted in the best-ever first-half returns to Good Causes of £956.5 million – up £72 million (+8.1%) on last year – taking the total generated for Good Causes since The National Lottery launched in 1994 under Camelot to £47 billion.

The record half-year – driven by record digital sales – maintains the impressive growth that Camelot has delivered over the last five years as a result of the company offering great consumer choice in a safe and convenient way. Encouraging millions of people to “play a little” has also ensured that The National Lottery remains resilient despite the more challenging economic climate. In total, more than 32 million people played National Lottery games over the period, with average weekly spend across all games and channels broadly in line with last year.

Camelot Chairman, Sir Hugh Robertson, welcomed the results: “I am delighted that these record results show that The National Lottery is returning more to Good Causes than ever before. In this hugely testing economic period, I am proud that my team’s remarkable performance builds on previous years of record ticket sales and returns to Good Causes – and extends our track record of delivering for people across the UK. With just over a year to run until the start of the next licence period, I am confident that The National Lottery has never been in better shape.”

In total, the National Lottery awarded £2,303.1 million in prize money to players over the first six months of the year – up £28.6 million – and created 169 new millionaires. These included the UK’s three biggest-ever winners, all of whom won on EuroMillions: an anonymous ticket-holder who scooped the record-breaking £195 million jackpot in July; Joe and Jess Thwaite who landed £184 million in May; and another anonymous ticket-holder who won £171 million in September.

Announcing the results, Camelot CEO Nigel Railton said: “Thanks to the commitment and professionalism of everyone at Camelot – and all of our hard work over the last few years – this record half-year performance confirms that we have a very healthy and successful National Lottery that continues to benefit the whole of the UK. These fantastic results also demonstrate our ability to adapt quickly and decisively to fast-changing and challenging economic conditions, while maintaining our longstanding reputation for selling tickets in a socially responsible way – attributes that have helped to keep The National Lottery in excellent health at such an important time for the UK.”

A key factor behind the record sales success over the half-year was a strong performance across draw-based games which were up £166.7 million (+7.5%) to £2,394.8 million. EuroMillions performed particularly strongly as Camelot capitalised on a series of huge rollover draws over the spring and summer to drive player excitement and sales – for example, over 15,000 players a minute signed into the National Lottery app and website ahead of the massive £184 million jackpot draw in May.

Elsewhere, Lotto performed well despite seeing fewer sales-driving ‘Must Be Won’ draws over the period and lived up to its millionaire-maker status by creating 71 new millionaires. Sales of National Lottery Scratchcards and online Instant Win Games were £1,669.1 million over the period – £64.2 million lower (-3.7%) year-on-year – mainly due to reduced sales of in-store Scratchcards, as a result of lower footfall and less frequent shopping trips.

Camelot’s standing as operator of the largest digital lottery in the world by revenue was reinforced over the half-year, with online sales growing to a record £1,835.9 million – up by £212.0 million (+13%). Within this, mobile sales grew by £218.5 million (+19%) to an all-time high of £1,368.5 million – reflecting the wider, ever-increasing shift to mobile shopping. A key driver behind this digital growth was the company’s success in making the most of the opportunities presented by the huge EuroMillions roll series to add more than 1.1 million new online player registrations to its now 10.7 million-strong digital player base.

Camelot continued to invest in and support National Lottery retailers over the period to achieve in-store sales of £2,228.0 million. The decrease of £109.5 million (-4.7%) on last year reflects the ongoing difficult conditions in retail, including a drop in footfall in some sectors and a preference for infrequent, bigger shops to seek better value deals over more frequent, smaller shopping trips. Despite this, retail remains the largest National Lottery sales channel and Camelot remains committed to doing everything it can to help its in-store partners, particularly independent outlets which make up the majority of its 44,500-strong retail footprint – including continuing its highly successful National Lottery standards programme which awarded over £268,000 in cash rewards to shopkeepers over the first half of the year.

Camelot’s ongoing work to drive relevance, positivity and participation through a strong and healthy brand was also prominent throughout the period, as it continued to showcase The National Lottery’s transformational role in national life through a number of major initiatives. In May, it hosted The National Lottery’s Big Jubilee Street Party at Manchester’s AO Arena to mark the Queen’s Platinum Jubilee. Billed as the UK’s biggest street party, it featured a star-studded entertainment line-up and was broadcast on ITV over the June bank holiday weekend. It also recognised the more than £22 million of National Lottery funding that went to communities across the UK to commemorate Her Majesty’s 70-year reign.

This was followed by a fantastic summer of sport that celebrated The National Lottery’s huge contribution to major sporting events, including the Birmingham 2022 Commonwealth Games and UEFA Women’s EURO 2022. As part of this, Camelot devised and staged a special one-off gig for National Lottery players, which saw the Lightning Seeds and David Baddiel – along with singer-songwriter Chelcee Grimes and a host of former Lionesses – perform a special live rendition of ‘Three Lions’. And hitting TV screens during the two huge sporting competitions was a brand new National Lottery advertising campaign entitled ‘The Chase’ – which featured England football player Ellen White and Paralympian Hannah Cockroft.

All of this activity ensures that The National Lottery remains front of mind at key national moments and continues to strengthen the connection between playing National Lottery games and the difference that makes to Good Causes, while helping to drive sales. Underlining this point, June’s special Jubilee ‘Must Be Won’ Lotto draw saw a massive 70% sales uplift compared with a Saturday base draw and, as a result, delivered even more money for Good Causes.

Looking ahead, The National Lottery is once again inviting the whole nation to come together and imagine the joy of winning big this festive season – with a special seasonal ad campaign, directed by Oscar-winner Tom Hooper, about two strangers who meet on a train and become lucky in love and the lottery. As part of the campaign, The National Lottery will also be launching a unique experience for players – with more details to follow in the coming weeks. And it doesn’t stop there, it is also hosting The National Lottery’s Big Bash – a spectacular music and entertainment show at the OVO Arena Wembley for National Lottery players, which will air on ITV and ITVX over the festive period.