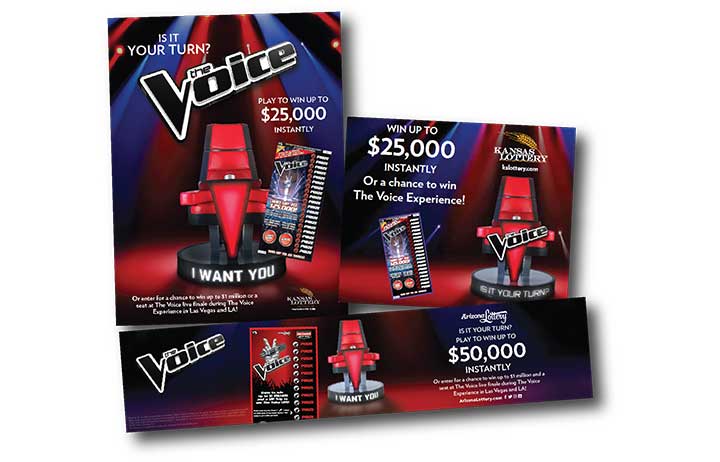 “Customers told us they want “The Voice was a great way to reach these players and not only encourage them to purchase the ticket, but now we have a chance to build a relationship and engage with them using our PlayOn program,” explained Judy Bradley, Instant Product Manager, Kansas Lottery. “It is important to continually evaluate our marketing mix, and to add new products that are relevant to our younger players.”

The attraction of the second-chance concert prize package was key. “Any fan of the show would love the opportunity to see The Voice live finale,” stated Chris Rogers, Deputy Director, Products & Marketing, Arizona Lottery. “Viewership of The Voice, according to the information provided by IGT, skews 60% female with ages ranging from 25-54. Millennials are included in that group.”

The Kansas Lottery was the first U.S. lottery to launch The Voice instant game in February 2018—just in time for the 14th season. Non-winning tickets can be entered into a second-chance drawing that will send one player and a guest to events in Las Vegas AND Los Angeles and give the winner a chance to win up to a million dollars and a chance to see The Voice Live!

“We have had over 40,000 second chance entries in PlayOn for this experiential prize package,” said Bradley. “Normally, we see a decline in our new member sign-ups after the holiday season, but we had a spike in new membership during the month of March.”

Sales performance is strong. Bradley reported The Voice ticket has “indexed at 105.41 at six weeks. We didn’t have any specific per capita sales goals—but any time a ticket indexes over 100 is a positive.”

The Arizona Lottery introduced The Voice scratcher in April 2018. “By offering a ticket such as The Voice, we do expect to attract new players, yet at the same time, appeal to our core player base,” said Rogers.

Sales to date are approximately $3 million. “We used The Voice radio spot produced by IGT for all states; we also produced it in Spanish. Three POS marketing pieces were created for us featuring the iconic chair and recognizable The Voice logo,” he said.