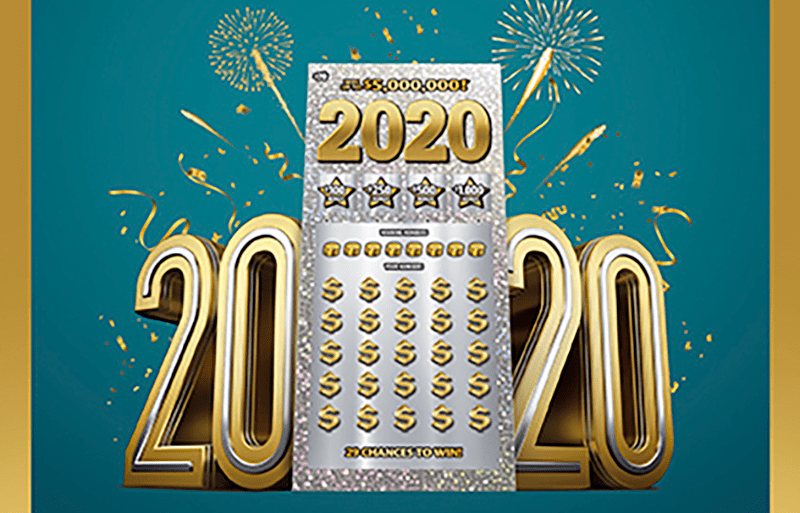 Multiple lotteries around the world sold 2020 scratcher games to usher in a new decade. New Year’s tickets are already a popular theme so a New Decade scratcher made sense.

“The California Lottery saw 2020 as the perfect fit for a themed $20 ticket. We launched our ‘2020’ ticket in late October 2019 along with our holiday-themed games to provide an additional option for the festive gift-giving season. The game tested very well in focus groups, tied to an iconic new decade, and was the perfect fit for our $20 price point,” said Whitney Alderson, Assistant Deputy Director, Marketing, California Lottery.

She reported that “‘2020’ indexed at 127 in its first 10 weeks on sale in California. In fact, its first 10-week sales total currently make it the highest selling $20 game since August 2016. It also exceeded sales of the $20 game we launched with last year’s holiday tickets by 35%.”

The popularity of this ticket required a reorder. “‘2020’ performed beyond expectation for California,” said Alderson. “In fact, sales were so strong we had to reorder within the first six weeks. Based on this success we extended the life of the game and plan to face at retail through spring 2020.”

Alderson said that the 2020 ticket was launched along with the traditional holiday tickets and was featured in lottery holiday advertising as one of four holiday-themed instant games anchored by the taglines “Give Joy” and “Give the Gift of Scratchers.”

“Our ‘2020’ ticket also received a short dedicated promotion window between Christmas and New Year’s in retail POS advertising, digital out-of-home, and social media marketing. This dedicated campaign invited California players to ‘Bling in the New Year’ and ‘Go Even Bigger in 2020’ while celebrating the new decade with California Lottery 2020 Scratchers,” said Alderson.

The game’s creative assets were used at retail, in out-of-home and as the anchor messaging in digital ads. “Our digital executions leveraged animation and headline builds that created eye-catching, thumb-stopping visuals that were highly effective in online and mobile environments,” said Alderson.

The Florida Lottery launched “2020 Big Riches” on December 2, 2019. “It’s only been in market for five weeks and we use 16-week indexing as our benchmark in Florida. Life-to-date sales for the game are over $13,000,000,” said Shelly Gerteisen, Director of Product, Florida Lottery. “We’ve offered a New Year’s themed ticket four of the last five years, all of which have indexed in the 120s.”

Unlike some holiday games, sales do not fall off in January. “Last year’s game debuted with average weekly sales of $2.9 million during the initial six-week holiday period, then maintained average weekly sales over $1.5 million post-New Year’s through February. We left it in market all year and sales declined gradually up until this year’s 2020 game launched,” said Gerteisen.
The lottery did not do any special advertising or promotion with this ticket.