Win Place Show, the first lottery game ever to be based on live horse racing, is now on sale in Kentucky. 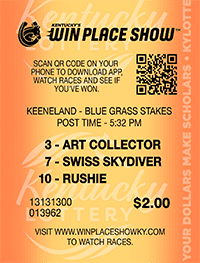 The game revolves around Kentucky’s signature thoroughbred industry, featuring races from across the country. For each drawing, players are randomly assigned three racehorse names and numbers on their ticket for the featured race that day. Results are based on the official results of that day’s race and the order of finish of the horses on their ticket.

As the game randomly assigns horses to the ticket (much like a Quick Pick ticket in a game like Powerball where numbers are chosen for a player) and there is no skill involved, it is considered a lottery game.

Much like the model in racing, the first and second prize levels are not fixed but instead based on that day’s sales for the game. If there is more than one winner in a prize tier the prize pool is divided equally among all winners on that level.

Players can find out if they’ve won by watching the featured race for that day on the Win Place Show mobile app (available for download on all Apple and Android products), by checking the kylottery.com website, or by scanning the QR code on the ticket while using the mobile app.

The game was successfully test piloted in the spring of 2019 in approximately 45 retailers in Louisville, Lexington and Northern Kentucky, and is projected to sell $2 million in tickets this fiscal year.

With this new draw game offering, players are able to purchase quick pick tickets based on the results of a live horse race each day. These tickets can be purchased at retail alongside draw game mainstays such as Powerball and Mega Millions. Players can watch the races live or on replay through the Win Place Show mobile app available for iOS and Android devices.

“We could not be more delighted to launch our first game in my adopted home state of Kentucky,” said EquiLottery Games Founder and CEO Brad Cummings. “Especially at a time when people are looking for safe ways to enjoy live sports, Win Place Show lays the groundwork for a new category where players do not have to be experts to win real money on live events like horse racing. On behalf of the entire EquiLottery Games team, I want to thank the Kentucky Lottery for their leadership in helping to move the lottery industry forward with this new type of lottery game.”

EquiLottery Games supports each of its lottery games with proprietary systems that serve as the system of record for each game. Upon integration with a state lottery, these systems provide the game logic, Random Number Generator, and event data necessary to offer this unique lottery experience to players.

“Given that racing is such a big part of the fabric of Kentucky, we’re excited to be the first state to launch Win Place Show,” said Kentucky Lottery Interim President and CEO Marty Gibbs. “Increased Kentucky Lottery sales mean more dollars for the college scholarship and grant programs we fund, and we’re anxious to see how the game performs in the marketplace.”