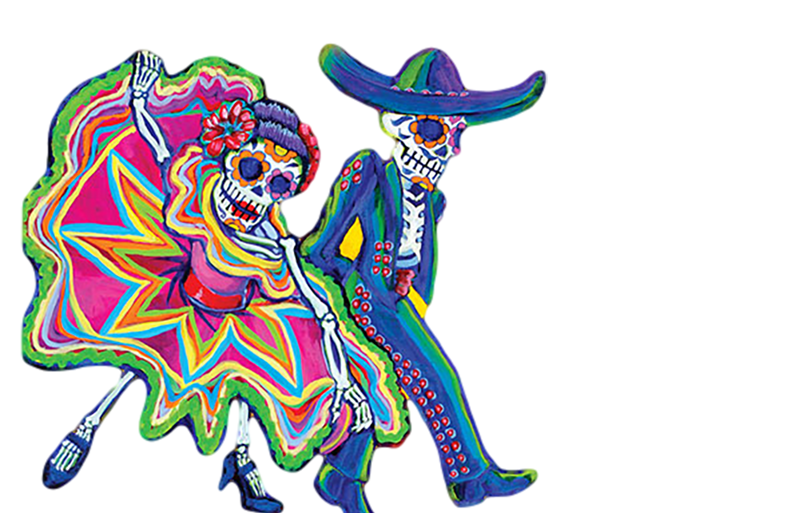 Who doesn’t love Coco, the animated Disney Pixar movie that is a family favorite? It put the spotlight on Dia de los Muertos (Day of the Dead) which commemorates loved ones who have died.

In the movie, Miguel’s grandmother (abuelita) explains that “It’s the one night of the year our ancestors can come visit us.” 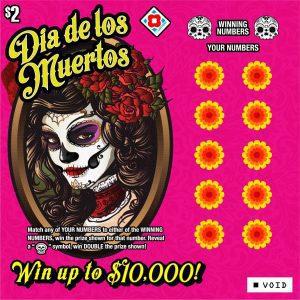 The DC Lottery has twice sold the ticket. “Our Dia de los Muertos themed tickets have been a seasonal favorite of DC Lottery players, so much so we launched the game twice – the first time in October 2017 and again in September 2019,” said DC Lottery Executive Director Beth Bresnahan. “The custom artwork we featured on the $2 game is vibrant and celebrates the ancient Mexican tradition that honors the deceased by celebrating their life. Ticket inventory with robust prizing remains from last year’s release (about 40%) which we will be promoting via social in late October and early November.”

The Oklahoma Lottery also launched a $1 “Day of the Dead” instant ticket. Seasonal tickets are effective in generating trial.

“We try to launch licensed properties and whimsical themed games at out lower price points to generate interest and trial amongst light and lapsed players,” explained Brandie Reisman, Director of Marketing & Administration, Oklahoma Lottery. “We know that our core players will typically try all of our games but we are hoping that a familiar brand or a clever holiday theme will peak the interest of someone who doesn’t play that often or who has never played before and feel that the lower price points are an easier entry point for those consumers.”

In terms of performance, Oklahoma’s Reisman noted that “this [Day of the Dead] ticket is performing as expected. We have to keep in mind that comparing games launched in the 2nd half of 2020 are at a disadvantage compared to those launched in the 1st half of the year where we saw unprecedented sales during the Covid lockdown.”

According to the lottery, this ticket was designed to appeal to different interests. It featured scenes that reflect the traditions and personality of New Mexico. MOTORCYCLES — “Dog Is My Co-Pilot,” CLASSIC CARS — “56 Oldsmobile,” BALLOONING — “Balloonists,” LOVE — “The Betrothal,” DANCING — “Folklorico,” and MUSIC — “Mariachis.” 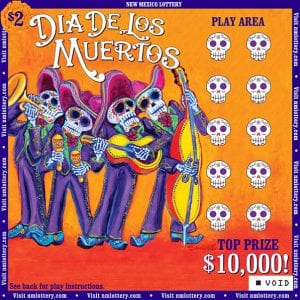 In its July/August 2015 edition, La Fleur’s Magazine featured a story on how New Mexico Lottery instant product manager Karla Wilkinson came up with the idea of how to feature a local artist’s work for a Dia de los Muertos instant ticket. Wells explained how it came about the New Mexico Lottery worked with her: “Karla had seen the bottles of wine that feature my artwork at the local Total Wine. She had the spark for a Day of the Dead themed lottery scratcher series. She called the company and was pleased to find out that I was local. We met and hit it off right away. She explained her concept and we both agreed that promoting New Mexico imagery was core for both me as an artist and them as an organization.  They originally commissioned four images, but when I presented the images, they were so excited that they increased it to six images.”

Wells said it was a tremendous opportunity to get to work with the state lottery. “I am so grateful to Karla for having the vision to present the idea and for trusting me to take the idea and run with it. I grew up in the trailer parks of Santa Fe and I used to put my drawings out on the street for 25¢ to try to help my Mom pay the bills. I never sold any one image. So, having an incredible opportunity like this to share my art and support my family through art is quite literally a dream come true. I am so proud to be representing the local artists of New Mexico on a New Mexico lottery scratcher and contributing to the State Scholarship fund with my art. I have been very inspired by the Lottery’s commitment to support me as a local artist and promote everything good in New Mexico. Thank you to the New Mexico Lottery!” said Wells.

Similarly, the Minnesota Lottery marketed a Day of the Dead instant ticket. It featured a cultural tradition celebrated with authentic art by renowned Day of the Dead artist Luis Fitch, who is Mexican by birth and Minnesotan by choice. A video interview with Fitch explained the source of his creativity in this video.