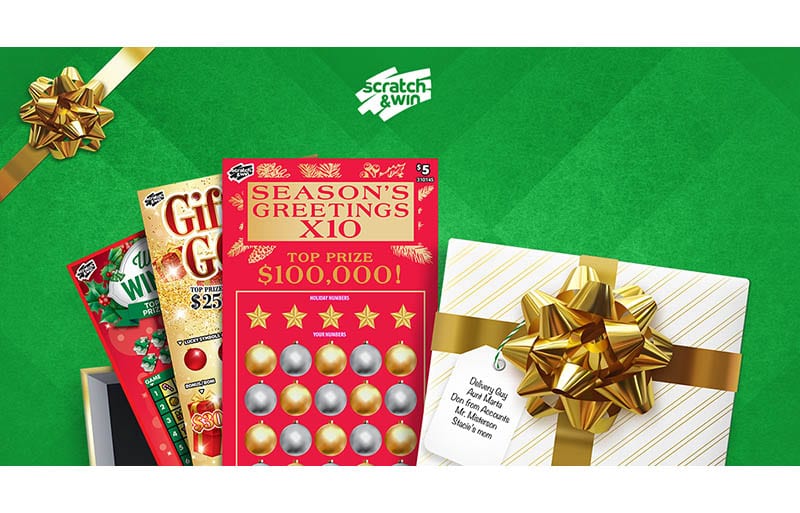 The holiday Scratch & Win tickets for B.C. Lottery Corp. (BCLC) offers something for everyone.

“It’s always a hit with our customers,” explained Shirley Park, Product Specialist, Instant Games Lottery Marketing, BCLC. “In particular, the higher price points have become very popular over the last few years. Of note, our $10 national holiday ticket has seen an increase in sales year over year since it launched five years ago. This year’s $10 Gifts of Gold features a classic gold and red Christmas color palette with no shortage of sparkle. In addition to the enticing top prizes of $250,000, it also has a unique game play that features both a key number and symbol match in the same game play area. It will be interesting to see what our players think about this game play.”

BCLC also offers the annual holiday program. “Players also love our annual Tech the Halls contest, a second-chance contest advertised on all our holiday tickets where players enter an entry code from any of the holiday tickets onto a contest site for chances to win more prizes,” noted Park.

Holiday scratch sales should be strong. “Our overall Scratch & Win business has grown quite considerably in the last six months, which was not predicted at the outset of COVID. Tickets have been flying off the shelves (or, rather, out of the display cases) and we believe the year’s holiday tickets will be no exception!” she added.

BCLC will promote its holiday ticket lineup through media and retail POS campaigns. The lottery will focus on two message:

– Tech the Halls contest promotion messaging: “Two chances to win? Even a grinch would grin.”

Due to COVID, BCLC will be making some changes in how it markets holiday games. “In terms of media, we are definitely seeing some new media usage trends emerge, at least for the short term,” said Park. “Based on these, we have adjusted our media mix. As an example, we have shifted some of our out-of-home (OOH) and traditional print spend to digital media given that with less people driving or going out, there is less exposure to these traditional forms of advertising.

“With our retailers back to being operational with COVID safety enhancements in place, we are continuing to promote through retail as we typically would with the same point-of-sales materials and quantities as we were producing pre-COVID,” she added. BCLC’s media campaign coverage includes digital and social ads, newsprint, OOH large billboards, a radio/Spotify ad and TV news tags. Retail/in-store point-of-sales materials include posters, a counter card, digital signage and signage on our display cases.

BCLC regularly updates its annual holiday contest. “Throughout the years there have been many changes to the site design, game play and prizing,” said Park. “All of these changes were based on feedback from our players and suggestions from our User Experience team. Every year we give players who enter the contest an opportunity to complete a survey and incent them with bonus contest entries. This provides us with valuable insight into things like which types of prizing are most popular, what they like or don’t like about the user experience, layout and gamification features.”

Although merchandise prizes are offered, players prefer cash. ”As we say here, cash is king,” said Park. “Through the years, we have learned that cash prizing receives the most number of allocated entries, so we have increased the number of cash and gift card prizes. Interestingly enough, players have provided the feedback that having a larger number of total prizes is more exciting than a smaller set of larger prizes, even if the total value of all prizing is the same. We offer one grand prize which is a tech package (big screen TV, gaming console, sound system) which has a cash equivalent. We have also offered a number of smaller prizes, such as TVs and tablets. We have a gamification feature where players can choose which prize they want to draw for. In this way, we get a good idea of what prizes motivate players and as mentioned, cash is always the most popular prize.”

Splashdot creates, hosts and administers the contesting microsite. “They also manage the account database, send out Tech the Halls communications, conduct the winners’ draws for us and fulfill the instant win prizes,” explained Park.

This is the ninth year since the Tech the Halls contest’s debut. In 2019, the lottery had 123,232 active users registered. “It continues to grow steadily,” said Park.

BCLC uses this database to also regularly correspond with lottery players. “We have a player communication journey tied to the Tech the Halls contest which Splashdot administers,” said Park. “However, we also use the data in-house for a BCLC player acquisition journey starting after Tech the Halls registration that directs players to join PlayNow.com and get free play tokens. In addition, we use the database when there are other player journey communication opportunities.”