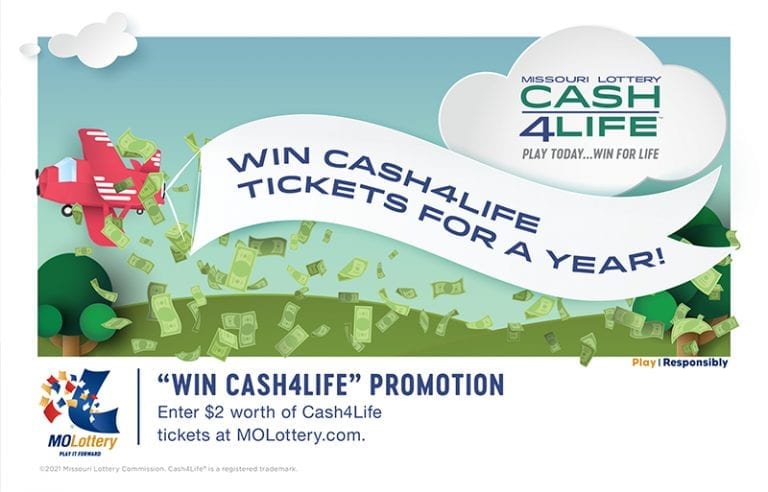 On April 23, Missouri Lottery players who “Take A Chance” and purchase a $6 Cash4Life ticket will receive a free $2 Powerball ticket. This one day promotion, known as “Take A Chance Day,” puts the spotlight on a draw game, such as the newly launched Cash4Life.

“We developed colorful and energetic POS messaging, not only for the game launch but also for the second-chance player promotion that followed,” she added. “We created Cash4Life T-shirts for LSRs to distribute to their retailers AND provided for all employes to wear.”

Pre-launch promotion activities included messaging on draw game bet slips and new game highlight videos. “Win.molottery.com was a promotional website (that was also advertised on our Retailer Portal site) that allowed players and retailers to watch a quick video about the new game features and then enter into a drawing to win $100 CASH,” said Vuilcott.

After sales began, “players received one entry for every $2 worth of Cash4Life tickets entered into their players club account for a chance to win Cash4Life tickets for a YEAR and $500 CASH. Ten winners will be drawn weekly in four drawings from April 11 – May 8,” she added.

With no funds for a TV ad, the lottery partnered with three radio stations in its largest markets (St. Louis, Springfield and Kansas City). “We are doing a two-week Cash4Life promotion with each of them. For the radio promotion we are giving away Cash4Life prize packs that include a coupon, T-shirt, and water bottle,” said Marty Zuniga, Community Relations Manager, Missouri Lottery. “As a sponsor of the GO! ST. Louis event, we are giving every runner that participates a Cash4Life virtual coupon via email.”

The lottery also relied on special merchandising. “In addition to the T-shirts and POS, we developed a solar-powered counter display piece, advertising the game launch with a moving element ($2) to catch the eye of the customer at the point-of-purchase,” said Fehr.

For social media, separate Facebook posts were developed for the game launch and the promotion during the first week of the game. “A recurring contest to win game coupons was themed around the new game,” said Wendy Baker, Communications Manager, Missouri Lottery.

My Lottery® Players Club members also received incentives. :From game launch through the end of April, loyalty club members who enter $10 of Cash4Life into their account will receive a wheel spin to earn Draw Points, Prize Points or Missouri Lottery coupons,” said Vuilcott.

There were also targeted emails. “For players who had entered a Lucky for Life ticket into their players club account, we sent a Cash4Life coupon via email as a way to sample the new game,” said Baker.