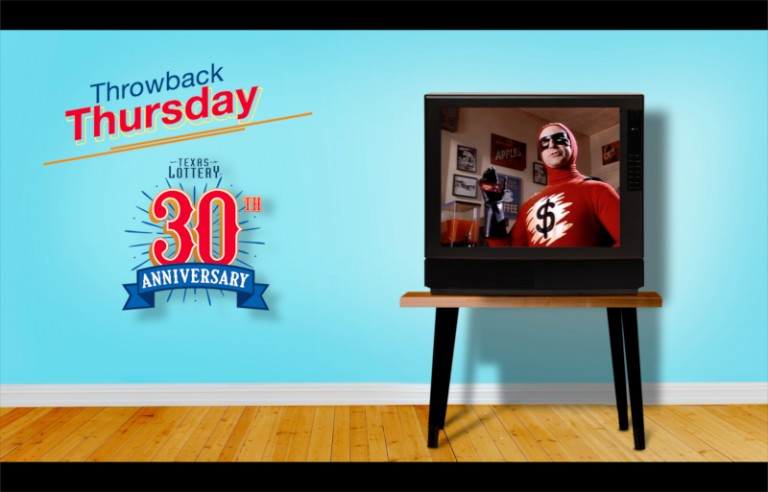 The Texas Lottery is celebrating its 30th anniversary with a year-long series of events. In June, the lottery’s social media focus highlighted fun Texas Lottery history in a “Throwback Thursday” format.
“Each Thursday in June, we looked back at a significant or memorable event in Texas Lottery history to remind our followers where we’ve been during this ‘30 Years of Winning,’” explained Lauren Callahan, Media Relations Director, Texas Lottery.

“The events featured included then-Gov. Ann Richards purchasing the first scratch ticket on May 29, 1992; the first Lotto Texas® drawing on Nov. 14, 1992; the launch of the Cash Five game in 1995; and a television advertisement featuring Scratchman, an early Texas Lottery icon,” added Callahan. Lottery players can follow the Texas Lottery social media pages for its “30 Years of Winning celebration” on Facebook, Twitter, Instagram and YouTube.

The launch of Cash Five featured the five flying Elvis impersonators. Check out the video on YouTube!

The Texas Lottery will also incorporate the 30th anniversary celebration in POS for lottery products. “At the start of the celebration, the messaging will be focused on social media. However, when we launch our 30th anniversary scratch ticket in April 2022, we definitely plan to have in-store messaging on ESMM. We are still evaluating other messaging opportunities, such as having our experiential partners use ‘30 Years of Winning’ messaging,” explained Ryan Mindell, Lottery Operations Director, Texas Lottery.

Since May 1992, cumulative lottery sales total $113 billion in sales. The Texas Lottery has distributed more than $69 billion in prizes to players. It has generated more than $32 billion in revenue for the State of Texas, including more than $26 billion for public education and nearly $160 million for Texas veterans since the dedication of these funds by the Texas Legislature.