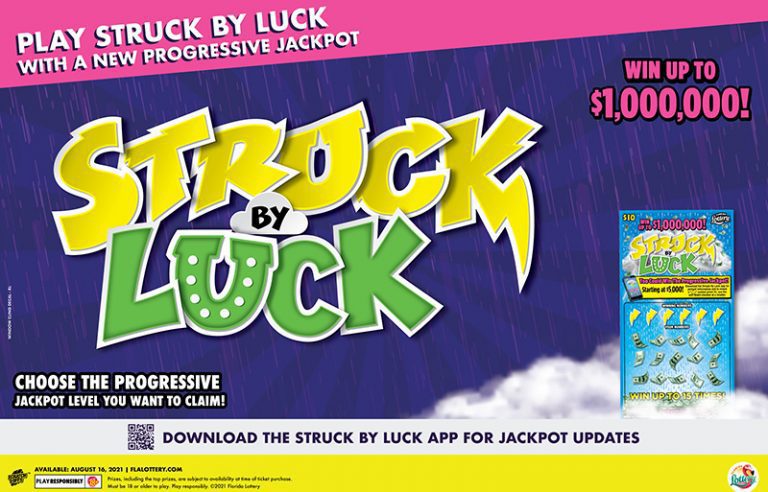 “After six weeks, SBL sales have total $67,466,500 and since launch it has ranked as the 3rd top-selling game in the state, behind the $30 Billion Dollar Gold Rush Supreme and the $20 $5,000,000 Gold Rush Classic games,” said Shelly Gerteisen, Director of Product, Florida Lottery.

“Florida has seen tremendous growth at the $10 price point since introducing its first Blowout style game in Spring 2019,” she reported. “Since then, our $10 game launches have almost exclusively been Blowout-style games or tied to a family of families and we wanted to offer this core player group something different.”

These lightning results match the game’s theme—struck by luck. In fact, if a player reveals the lightning bolt symbol, he wins all 15 prizes shown on the ticket.

Ticket sales are supported by a STRUCK BY LUCK app. In its first two weeks, there were over 80,000 STRUCK BY LUCK app downloads. “It ranked #114 in Entertainment apps in the Apple Store,” said Gerteisen.
In addition to the app traffic, she added that there have been 260,000 visits to the SBL microsite.

The lottery’s marketing support focused on in-store advertising as well as digital channels. “The Lottery relied heavily on in-store signage including POS, jackpot displays on the digital screens at retailers, the Lottery website, and the STRUCK BY LUCK app/microsite. We also utilize some digital advertising, such as displaying the current jackpot on GSTV,” said Gerteisen.

The lottery reported the idea for STRUCK BY LUCK came from one of Pollard Banknote’s Innovation Engineering projects. “The project team was tasked with the mission of coming up with instant game concepts with progressive play mechanics and associated prize structures. This particular concept and game name was favored for its fun theme and engaging features,” said Krista Stepa-Ammeter, Director, Sales & Marketing, Pollard Banknote.