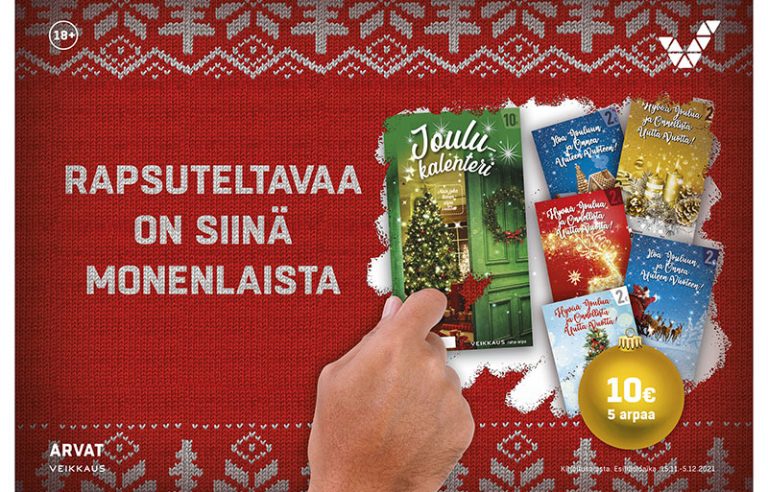 Veikkaus Oy in Finland predicts that the biggest seller for its holiday tickets will be its 5 € Casino ticket both in pieces and Euros.

“Our 5 Euro Casino ticket celebrates its 35 year anniversary this year. The ticket launched at the end of October. It looks nice with a gold foil on the design,” said Erja Holsti, Product Coordinator, Veikkaus. “Because of the anniversary, the total amount of prizes in this special ticket edition is 10 500 000€
Prize payout is 70%. There are 3 million printed tickets.”

Veikkaus also will market the traditional Advent Calendar scratch card that is popular in many European countries. “Our traditional 10€ Advent Calendar has a door theme image on the front of it and cozy indoor image with a fireplace and Christmas tree inside of it,” said Holsti. “Prize payout is 65% and approximately every second ticket wins. There are 1 million printed tickets.”

With the Advent Calendar ticket, players must scratch 24 numbers on the calendar starting from the window number 1 and continue through the window number 24 (extended play ticket). There is also a Symbol game: find three “Star” symbols to win.

Holsi added, “In the same way as last year we have five different Christmas-themed sparkling designs of 2 Euro Christmas ticket (1.5 million tickets printed). Prize payout is 60% and approximately every second ticket wins. The ticket features a Merry Christmas and a Happy New Year wish on the front of it.”

Finally, Veikkaus will market a Christmas/winter-themed 4 Euro Ässä ticket. “It is designed with a knitted pattern that is an Extra edition,” said Holsti. Prize payout is 60% and approximately every third ticket wins.