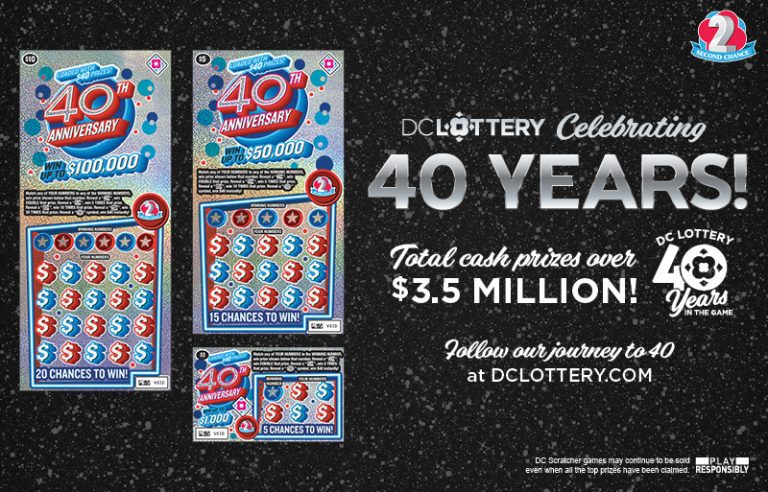 The DC Lottery kickstarted its 40th Anniversary in 2022 by launching a mini-family of games.

“On January 5th, we launched our $1, $5, and $10 40th Anniversary scratchers that are each loaded with $40 prizes and have a collective prize pool of over $3.5 million dollars. We worked with Pollard Banknote to produce these games and they are truly spectacular,” said Stephen Cooke, DC Lottery.

The theme for this FOG is celebratory since its promoting the lottery’s 40th Anniversary. “Our very first scratcher in 1982 was silver, so we payed homage to this by designing a futuristic silver game with a special glitter foil background. We also made sure to incorporate our company colors (red, white and blue) in the design. This ticket really pops at our retail locations and players are already commenting on how attractive the games are once they have them in-hand,” he added.

In terms of estimated weekly sales and weekly PC sales for this FOG, Cooke explained that “the tickets have only been on sale for a couple of weeks, but we’ve already done $500,000 in sales.”

The anniversary scratchers will receive a lot of marketing support but Cooke noted that “ most retail promotions, special merchandising, and events will likely kickstart in the early spring. So far, we’ve launched POS, social media and digital support, and we’ve launched a special DC Lottery 40th Anniversary landing page that will evolve throughout the year. Players will be able to engage with us as we go back down memory lane to recognize the great products, events, and contributions the DC Lottery has provide the city and our community of players throughout the years.”

He added that “this FOG will receive advertising support throughout the year with ads in community publications, radio spots, and a television campaign (launching later in the year).”

Players’ Club members will be eligible for a unique 2nd chance opportunity featuring a progressive prize. “In order to participate, players have to collect all three games, and if they are NON-WINNING, they can enter them into the 2nd chance contest for a chance to win a monthly grand prize—that grows each month!” explained Cooke.

Check out our 40th Anniversary landing page below. We will be updating throughout the year with a lot of exciting material!