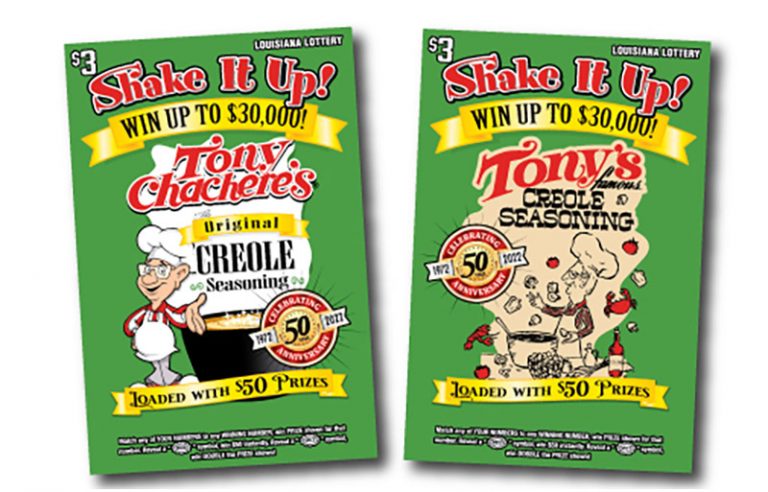 To celebrate the 50th anniversary of Tony Chachere’s Creole Foods, the Louisiana Lottery Corporation will once again partner with this quintessential and beloved Cajun seasoning brand to launch a $3 scratch-off, Shake It Up!, on Feb. 28.

“Just in time for crawfish season, our strategic alliance with Tony Chachere’s will ‘shake up’ our scratch-off portfolio and retailers’ dispensers with a little lagniappe,” noted Lottery President Rose Hudson. “In 2015, when we launched our first Tony Chachere’s branded game, it was named Best Scratch-Off of the Year in North America. Just like the seasoning, we think this year’s game is going to be a fan favorite.”

The game will feature four top prizes of $30,000 and more than 1.68 million tickets printed with two scenes that recall both the current and original iconic “green can.” The games’ prize pool also includes over $2.8 million in cash prizes, including an abundance of $50 prizes and overall odds of winning at 1 in 3.83.

“We’re thrilled to once again partner with the Louisiana Lottery,” said Don Chachere, President and CEO of Tony Chachere’s. “Our customers are known to encourage friends and relatives to try our products, and we believe the lottery ticket will have the same positive influence and for a great cause.”

Revenue potential for the game is $4.5 million, with proceeds benefiting K-12 public education as is the case with all of Lottery sales.

To complement Shake It Up!, the Lottery will also launch its $1 seasonal scratch-off game Craw Fish on the same day.

In addition to an advertising campaign featuring the animated “Little Tony” character from Tony Chachere’s product packaging, the Lottery will host a player promotion on its website and a social media promotion later this spring that will feature prize packages filled with Tony Chachere’s products, branded cooking merchandise, as well as a 50th anniversary commemorative T-shirt featuring the Shake It Up! ticket.

Entrants will be required to upload a picture of themselves with a can of Tony Chachere’s Creole Seasoning and a Shake It Up! scratch-off, as well as share their favorite food on which to shake the creole seasoning for a chance to win.

In addition, the Lottery will conduct a statewide tour this spring with its promotional truck “LOLA” (Louisiana’s Onsite Lottery Attraction) to include special Tony Chachere’s gift-with-purchase promotions at select retailers. Players purchasing $15 worth of Shake It Up! and/or Craw Fish scratch-offs will receive a special gift-with-purchase, while a $20 purchase also earns them an entry into a drawing for a premium prize package filled with Tony Chachere’s products and merchandise, including an apron and a cookbook.

The Lottery has enjoyed success with numerous Louisiana-themed scratch-offs and strategic partnerships, including the New Orleans Saints, Crystal Hot Sauce, Duck Dynasty® and Choot ‘Em® to name a few.