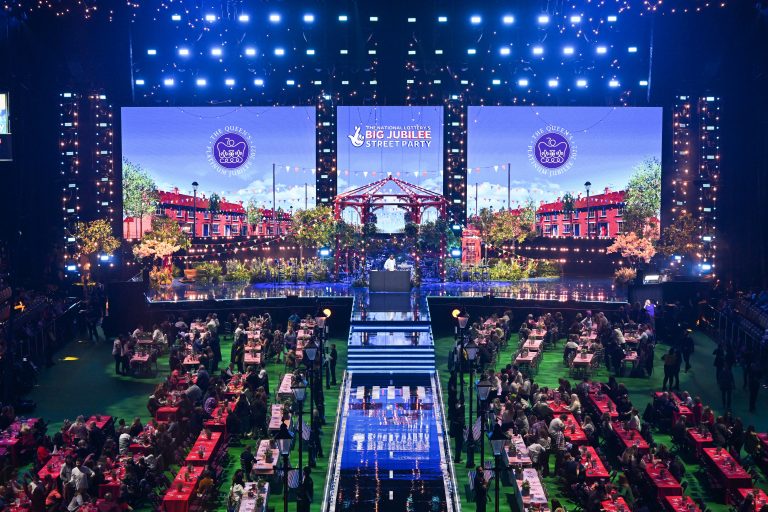 MANCHESTER, ENGLAND - MAY 12: Guests are seated atThe National Lottery’s Big Jubilee Street Party, to celebrate the organisations that have been awarded grants for making a huge difference to communities across the UK. Coming soon to ITV and stv. (Photo by Jeff Spicer/Getty Images for The National Lottery )

Camelot UK Lotteries Limited announced its best-ever returns to Good Causes from National Lottery ticket sales for the second consecutive year. This record amount was generated from sales of £8,090.7 million for the 2021/22 financial year (1 April 2021 to 31 March 2022). Although this represents a decrease of £283.2 million on last year’s record sales of £8.3 billion, it is only the second time in The National Lottery’s history that ticket sales have broken the £8 billion mark.

Camelot Chairman, Sir Hugh Robertson, welcomed the results: “At a time when The National Lottery has faced uncertainty on a number of fronts, Camelot has once again raised a record amount for Good Causes from ticket sales, and has also ensured that a record-equalling £3.1 billion was once again generated for society through Good Causes, Lottery Duty and retailer commission – at a time when other funding sources are being squeezed. An incredible £46 billion has now been raised for National Lottery Good Causes – around 65% more than government expectations at launch. With sales of over £8 billion for two years running, The National Lottery as a whole remains in fantastic shape – with sales of draw-based games continuing to be especially strong.”

Including unclaimed prizes, £1,911.8 million was generated for Good Causes over the period – an increase of £24.3 million on last year and the equivalent of £36 million every week. This makes it the second best-ever total raised for Good Causes – second only to 2012/13 during London 2012 and when there were significantly more unclaimed prizes – and only the third time in The National Lottery’s history that the Good Causes money generated has exceeded £1.9 billion. With approximately 1% of sales retained as profit by Camelot and 4% spent on operating costs during the period, The National Lottery continued to return around 95% of all sales revenue to winners and society.

Announcing the results, Camelot CEO Nigel Railton said: “Achieving National Lottery sales of over £8 billion two years in a row while maintaining very high levels of public participation – despite the challenging and changing external environment – proves that our strategy of offering great consumer choice in a safe and convenient way continues to be hugely successful. It’s also testament to the resilient, innovative and responsive business model that we’ve put in place over the last few years.

“In particular, our ongoing investment in The National Lottery brand – which this year saw us carry out an unmissable campaign to celebrate National Lottery players’ contribution to Tokyo 2020, as well as support a number of great money-saving promotions for National Lottery players as Covid restrictions eased – and our innovation in the flagship Lotto game continued to pay off. Generating record returns to Good Causes from ticket sales for the second year running is an outstanding achievement – and is fantastic news for people, projects and communities across the UK at a time when funding has never been more needed.”

Last July, it launched and executed The National Lottery’s largest-ever brand campaign for Tokyo 2020 to remind people that, every time they play a National Lottery game, they directly support Team GB and ParalympicsGB. The summer-long, unmissable campaign was proven to have boosted sales performance in the first half of the year, as well as to have enhanced brand positivity and significantly increased awareness of The National Lottery’s funding of sport. This was then followed by two award-winning National Lottery Homecoming events at Wembley Arena that gave over 16,000 players, for free with their National Lottery ticket, the opportunity to welcome home their Olympic and Paralympic heroes alongside a stellar line-up of entertainment. The shows were also enjoyed by millions more on TV with both events televised as part of the BBC and Channel 4’s coverage of the Olympic and Paralympic Games respectively.

Despite fewer large EuroMillions rollovers – with 15 draws with a jackpot of over £100 million in 2021/22 compared with 22 the year before – Camelot still achieved draw-based game sales of £4,647.5 million, a slight dip of £43.2 million. The flagship Lotto game continued to be the most popular game, with a steady stream of ‘Must Be Won Rolldowns’ resulting in boosted prizes for everyone – including around a million players on average per ‘rolldown’ who win an additional cash prize of £5 for matching two main numbers. This helps drive player positivity, engagement and retail footfall. Since this feature was introduced in November 2020, more than 30 million tickets have now won a ‘fiver’. And, with its top prize of £10,000 a month for 30 years, the newest game in the portfolio, Set For Life, continues to go from strength to strength.

Meanwhile, the majority of sales decline for the year is attributable to a decrease in sales of National Lottery Instants, down £240.0 million year-on-year to £3,443.2 million. This was largely down to greater competition for people’s attention and spend after the lifting of Covid restrictions, followed by growing economic uncertainty over the latter part of the year. Scratchcard sales remain below pre-pandemic levels in line with people’s changing shopping habits and sales of online Instant Win Games were further affected by lower play and wallet load limits for potentially at-risk players which Camelot introduced as part of its work to promote healthy play. They were also affected by the lower number of big EuroMillions rollovers, with fewer people buying them as spontaneous add-on products.

Making up almost 60% of sales, retail remains the largest National Lottery sales channel and Camelot continues to work closely with around 44,500 retailers across the UK – with independent outlets making up the majority. Despite the ongoing challenges caused by the pandemic in the early part of the year affecting both footfall and shopper frequency and, more latterly, the cost of living crisis slowing down retail recovery as consumers tightened their belts, Camelot achieved in-store sales of £4,674.2 million in 2021/22 – down from £4,864.4 million in 2020/21. As a result, National Lottery retailers earned £265.4 million in commission, the equivalent of around £6,000 per store.

In recent years, Camelot has also continued to innovate its retail offering to reflect changes in the way people shop – and to drive even greater distribution and convenience. By developing bespoke solutions for the likes of Aldi and Iceland, as well as making National Lottery tickets available at self-checkouts in Asda, The National Lottery now has over 19,000 points of integrated distribution in these retailers. And to address the ongoing shift in shopping habits, Camelot has worked with Tesco, Asda and Morrisons to offer a range of Scratchcards on their websites for home delivery or click and collect.

Camelot is nearing the conclusion of the five-year, £20 million retail investment that it committed to back in 2017. As a result of that and everything else that the company has been doing to achieve even higher in-store standards, increase distribution to bring in new players and deliver even better customer service for its retail partners, it achieved its highest retailer satisfaction scores in a decade. In addition, 94% of National Lottery retailers surveyed were either satisfied or very satisfied with the level of service provided in 2021/22.

1.8 million new online registrations and strong retention drive digital sales as Covid restrictions ease
Despite having a record number of people playing online in 2021/22, this year’s digital sales of £3,416.5 million were £93.0 million lower than last year – with players individually spending less as consumers enjoyed greater choice post lockdown, and also due to the introduction of lower online play and wallet limits for potentially at-risk players.

Online player engagement remains very strong and Camelot saw strong retention of players who had migrated from retail as a result of the pandemic. It built on this with some highly effective acquisition activity, which resulted in 1.8 million new player registrations over the year – taking its digital player base to a record 10.1 million active players.

Playing on mobile continued to be the digital channel of choice for players throughout the year. With sales of £2,449.4 million, playing National Lottery games on smartphones and tablets accounted for 72% of all digital sales. Much of this was driven by growth on The National Lottery’s apps, with sales growing by £93.5 million to an all-time high of £1,687.8 million. Healthy play on The National Lottery’s digital channels continued to be a key focus for Camelot and its introduction of new online play and wallet load limits for potentially at-risk players saw the proportion of players who are considered at risk drop to its lowest-ever level.

Lots of people playing a little – and winning

Camelot continues to be a world leader in healthy play with its strategy to get ‘lots of people to play a little’. Despite being the fifth largest lottery in the world by sales, the UK National Lottery is ranked just 62nd in the world in terms of per capita spend. In 2021/22, average weekly spend across all games and channels remained roughly in line with last year, with digital average weekly spend slightly reducing and fewer than two online Instant Win Games played per person per week on average.

The company was recently re-accredited with Advanced Level 2 of GamCare’s Safer Gambling Standard for its online and retail operations and, earlier in 2022, achieved for a fifth successive time the highest levels of both the European Lotteries’ Responsible Gaming Standard and Level 4 of the World Lottery Association’s Responsible Gaming Certification.

CEO Nigel Railton continued: “My 1,000 Camelot colleagues and I are incredibly proud of what we’ve built: a strong, resilient business and a huge UK brand that brilliantly connects The National Lottery’s unique purpose with play. In the year ahead, we’ll continue to invest and innovate to respond to the changing consumer environment because we all care deeply about the future of The National Lottery – and the vital difference that it continues to make to the whole of the UK.”