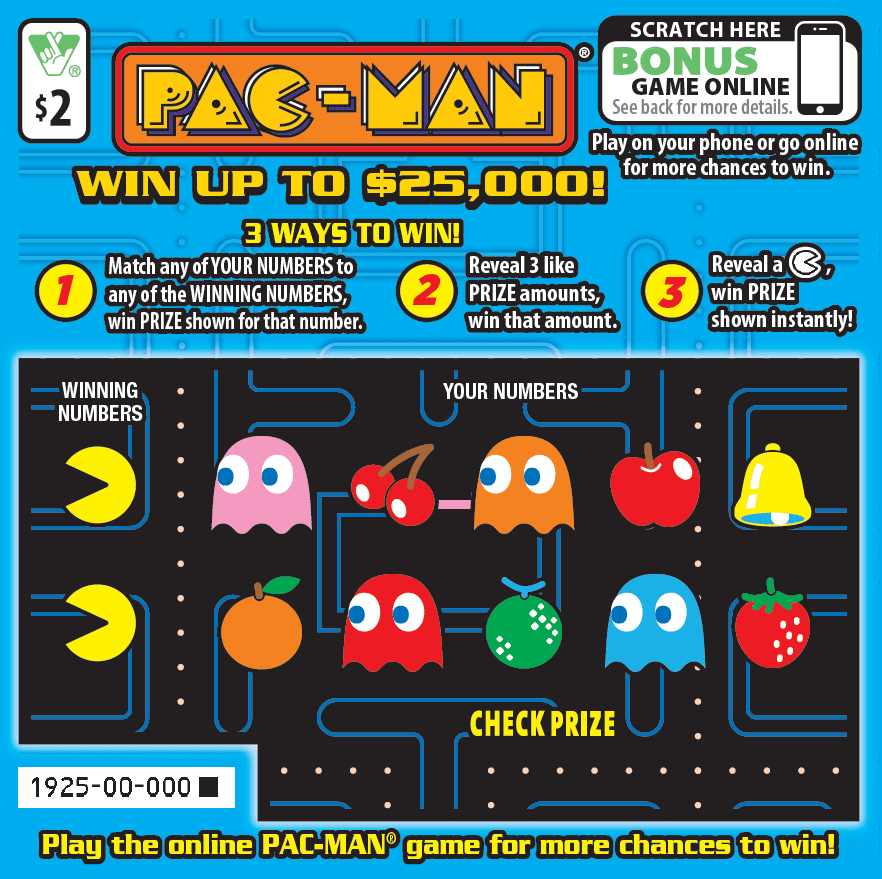 The Virginia Lottery launched its PAC-MAN® Scratcher ticket licensed from Pollard Banknote in late 2018. It was supported by a second chance promotion. The brand is recognized around the world as one of the most iconic videogame characters of all time, and the nostalgic brand has proven to be a hit with lottery players. PAC-MAN® is one of the Virginia Lottery’s most successful licensed products to date, achieving 22% higher sales than any of the Lottery’s other $2 licensed games launched since 2012 (based on ten-week sales).

The $2 PAC-MAN® Scratcher comes in five different color pulses and features a bite-sized match-3 playstyle that players enjoy at this entry-level price point. The simple gameplay, combined with the nostalgic, colorful characters, makes the game attractive to both new and existing players.

The Virginia Lottery has also given the game an extra life—non-winning PAC-MAN® Scratchers can be entered into a second chance draw for the chance to win exciting brand-themed merchandise, including arcade machines. One lucky second chance winner will receive the PAC-MAN® Cave Grand Prize Package which includes a PAC-MAN® Pixel Bash Cocktail Arcade Machine, as well as a $5,000 cash prize and various PAC-MAN® branded merchandise.

PAC-MAN® made his debut in Virginia with a launch event at The Circuit Arcade Bar in Richmond on Friday, December 7. The event included prizes and giveaways, an appearance by the PAC-MAN® mascot, and classic PAC-MAN® arcade games. The Lottery showcased the evening’s festivities via a live-stream on its Facebook page and behind-the-scenes footage on its Instagram stories.

“We have been very pleased with the initial results from the PAC-MAN® Scratcher,” said Kevin Hall, Executive Director, Virginia Lottery. “The brand’s popularity and iconic characters prompted us to build a fun launch event and offer second-chance promotions which we expect to bring in new players and ultimately boost our efforts to support Virginia’s public schools.”

“PAC-MAN® has performed exceptionally well in many jurisdictions across the U.S., with the Virginia Lottery experiencing the most recent success,” said Brad Thompson, Vice President, Sales & Marketing, Pollard Banknote. “The Lottery has done an outstanding job of promoting this exciting brand with a strong second chance promotion and a fun arcade-themed launch event. The combined support of the powerful brand and the strong promotional support have made this game a hit with Virginians.”