Paws for the Cause: Missouri Lottery’s Cats & Dogs Scratchers 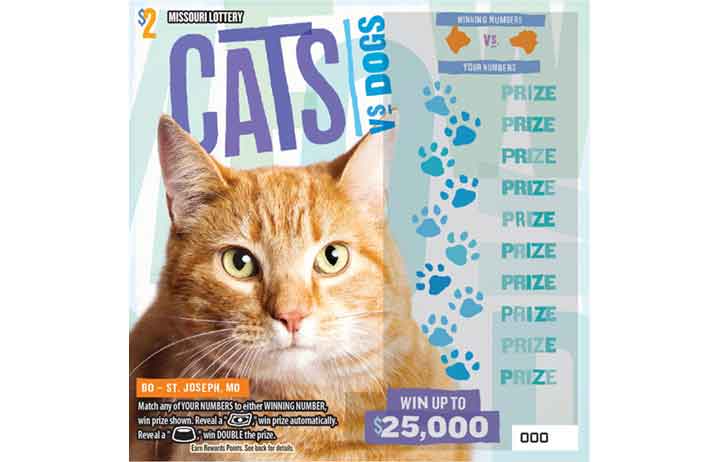 To promote the launch of its new “Cats vs. Dogs/Dogs vs. Cats” instant ticket ticket, the Missouri Lottery created Cats vs. Dogs Live. This was the first ever interactive puppy and kitten camera to be featured on Facebook Live.

“Viewers of the feed could interact with the animals in two ways. By hitting emoji buttons, players could trigger balls to be thrown into each of the custom designed play rooms. And every five minutes, viewers could vote to give a surprise toy, such as a sneaker or a laser light show, to either the puppy or kitten room,” said Rhonda Fehr, Advertising Manager, Missouri Lottery.

This novel ticket also featured real pets (not models). Pet owners mailed or dropped off photos to lottery offices around the state. The lottery received 550 entries.

The lottery’s Communications and Marketing departments judged the Calendar contest, while the social media tournament was driven by Facebook followers. Final selection for the Scratchers tickets was conducted by the lottery’s Marketing department. Three cats and three dogs were selected to appear on the six scene instant ticket.

The Scratcher features a tie in with animal shelters. “When the Cats vs. Dogs/Dogs vs. Cats game launched, shelter animals helped us promote the ticket, so helping them find good and loving homes seemed like a great way to express our thanks. It was a bonus way to give back to the community as well,” said Fehr.

Pet-themed products sell well because “people just have a strong connection with their pets. In fact, 68% of American households have at least one pet. Players have a pleasant and positive reaction when they see a cute animal, and we think these emotions translate to our ticket as well,” said Fehr.

The Cats vs. Dogs/Dogs vs. Cats ticket is currently indexing at 1.31 but Fehr said it has only been on sale for three weeks, so it’s too early for a true comparison.