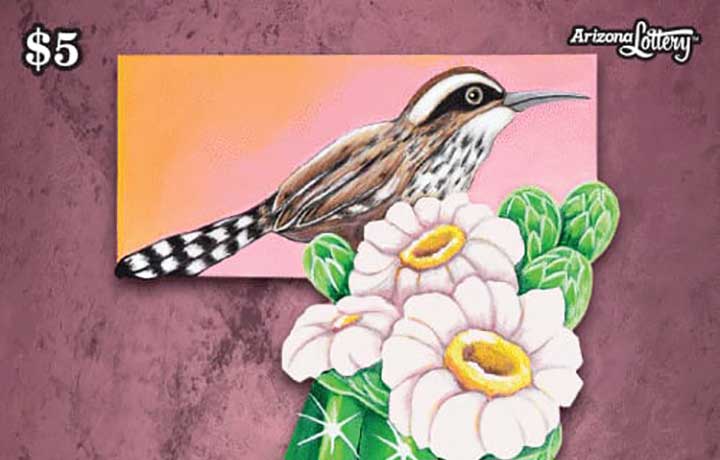 The Arizona Lottery launched its new $5 Arizona 7 Scratchers game, featuring three different Grand Canyon State scenes designed by its own artist-in-residence Emily Costello. She is the artist behind last year’s beautiful and fun Lucha Libre Loot Scratchers tickets. Costello is especially in-tune with the culture and the beauty of Arizona.

Arizona 7 Scratchers game comprises three different tickets. Each features a beautiful rendering of iconic Arizona objects and native wildlife: a whimsical 7-shaped piñata with candies to scratch off, a 7-shaped Gila monster crawling across the desert sand with eggs and cacti to scratch off, and a Cactus Wren (Arizona’s state bird) perched on a blooming cactus, forming a 7 with shining suns and cactus flowers to scratch off.

The ticket’s top prize is $50,000. If a player matches any of the numbers to any of the four winning numbers they win the prize shown for that number and, if they find a “7” symbol, they win double that prize!

“This new Arizona 7 Scratchers ticket is just the latest in a series of games the Arizona Lottery is developing to showcase the art and culture of our great state in ways that celebrate our heritage,” said Arizona Lottery Executive Director Gregg Edgar. “We are excited to bring these works of art to the people of Arizona while also helping to fund vital programs and services that would otherwise rely on taxpayer dollars.”