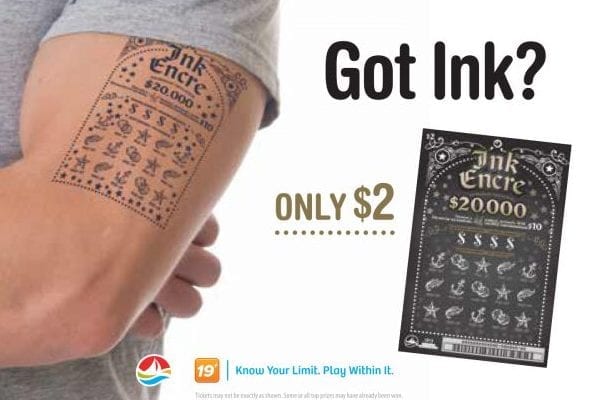 The Atlantic Lottery Corp. (ALC) launched a $2 Ink scratcher as part of its pop-culture themed tickets.

“Sales of our $2 Ink ticket were average for this price point—they weren’t through the roof but they weren’t below what we would typically get out of a $2 game,” reported Merrill Fullerton, Senior Brand Manager, Instants, ALC. “Where we had success with Ink was in the level of engagement we were able to generate with players. For a short two-week window in May, we ran a social media contest tied to this game that attracted more than 5,000 entries and reached about 350,000 Atlantic Canadians. We developed and executed the contest ourselves, so the total cost was minimal—only $2,300.”

Although the game wasn’t designed exclusively for millennials, Fullerton said the campaign was deployed to target Atlantic Canadian millennials. “However, we were underwhelmed by the results—just under 10% of contest entries came from this age group. Previous millennials-focused campaigns we had executed for Set for Life and other scratch games had realized far better results for us with about half of all entries coming from 19-34 year-olds. But the comparison is not necessarily a fair one because Ink received very limited advertising support (one small Facebook buy), whereas these other tickets had a far larger presence online that included in-game advertising, mobile ad units and Facebook paid content. So the big learning for us is that if you’re going to design a product with millennials in mind, you need to back it up with significant targeted media investments (mobile and online).”

In September, ALC launched a $1 Vinyl Hits scratcher. The theme was selected because of the popularity of old-style music records. “Vinyl sales are the highest they have been in more than 20 years largely driven by millennials who are seeking a more authentic way to consume music. (Music Watch reports that half of vinyl record sales are from men who are under 25). Armed with this trending, we developed Vinyl Hits—an inexpensive, easy to play, retro-designed game. Once again, we are going to be promoting this ticket through social media and will be giving away some music-themed prizes as part of a weekly contest in October,” said Fullerton.