Sports fans in Minnesota have it better than most. “The Star of the North” is one of the lucky states in the U.S. that has a professional sports team in every major sport. But come autumn, the Minnesota Lottery knows that football rules.
The Lottery collaborated with its instant game provider Scientific Games to kick off the 2019 football season with a Minnesota Vikings-themed HD Games™ product. What made the game even more special is that it’s the very first of the HD Games designed in the color purple—the color synonymous with the Minnesota Vikings.
Although football fans look forward to two Vikings games every fall from the Minnesota Lottery, this year the Lottery wanted a game that would score big points at retail with vibrant color and high-definition play symbols. A second chance win opportunity is featured on the back of the game.
Todd Vodden, Scratch Product Manager for the Minnesota Lottery, shared, “We run a $5 and $2 Minnesota Vikings ticket each year and this year we wanted to bring a new twist to the $2 Vikings game. We certainly think we did that with the new Minnesota Vikings HD Game.”
Scientific Games developed its next generation of instant games to advance creative possibilities, offer a more modern play experience and enhanced game security.
“HD Games are making a difference in pick-up appeal at retail, they’re indexing well,” said Jeff Martineck, VP Game Development for Scientific Games. “We are not at all surprised because these games were a big hit in our focus groups, particularly when compared visually to traditional instant games.”
What appeals most to players? The company’s research found that players immediately responded to the new line of games, describing them as “more appealing to the eye,” “scratching is more of an experience,” “bigger contrast between play symbols and play area provide better visibility,” and “symbols, numbers and prizes are clearer and easier to read.”
With HD Games imaging, game themes can be extended throughout the play area with stylized play symbols that improve the overall play experience. The highly detailed symbols open up exciting new play actions that appeal to loyal players, and the game innovation possibilities can help attract new players to instant games.
Since the first game launched in 2017, 45 HD Games have been offered by 17 state lotteries, generating more than $700 million in retail sales.
“Like the Vikings, the Minnesota Lottery wanted this game to be strong. The branding carried over well to HD Games play symbols and with the bold purple ink, this game is a winner,” said Martineck. 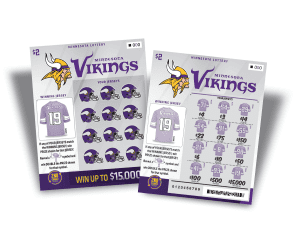