The Perfect Bundle: How a lottery found a way to start selling in Costco 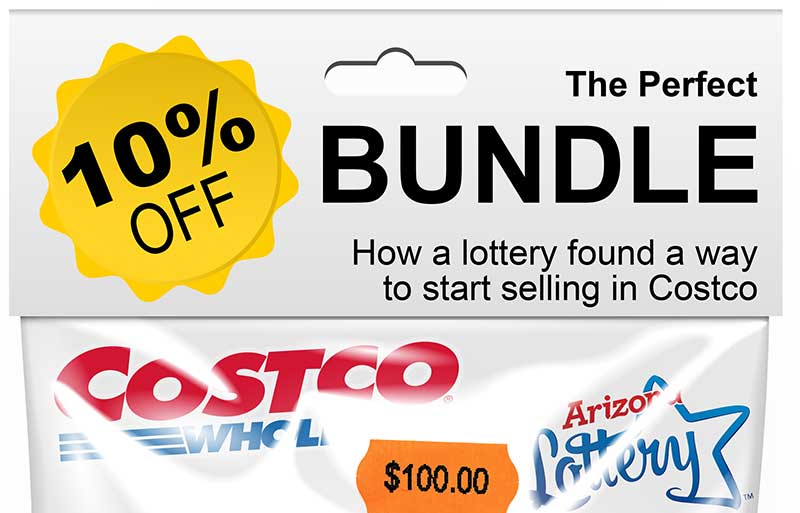 As lotteries across America search for new ways to grow, big box retailers are a challenging and almost uncharted territory, with their enormous traffic flow and high per-store sales. Costco has been, until now, one of those largely untapped retail opportunities. In 2018, the Arizona Lottery defied the odds by bringing a strong value proposition to Costco and, for the first time ever in the United States, began selling Scratchers® tickets to their members. What started as a holiday-themed $100 ticket bundle, being sold in a four store pilot program, in a matter of weeks grew to include all 17 Costco stores in Arizona selling bundles of Arizona Lottery tickets on a continuing basis. All it took was persistence, a well-timed letter, a willing retail executive, and a startup mentality to turn the impossible into reality.

Costco is the second largest retailer in the world, with only Walmart being bigger. Costco is ranked 14th on the Fortune 500 of the largest U.S. corporations by total revenue. Costco’s business model revolves around a traditional “big box” store strategy: rapid inventory turnover and high sales volumes, achieved by low prices; and a membership model where their members pay an annual fee to shop at Costco. As of 2018, Costco had over 90 million members, each paying at least $60 a year in fees to shop there. Costco is beloved by both its members and staff. The chain was named one of the best places to work by Glassdoor in 2016, 2017 and 2019. And it is easy to see why. After five years, full time Costco cashiers can earn more than $25 an hour.

Costco sells a wide range of both national and private-label brands in their stores. One product had long been notably absent: lottery. Anthony Demas, Arizona Lottery Territory Manager, sought to remedy that. The business case for Costco integrating lottery products into their stores made sense. The average Costco member in the Phoenix DMA, for example, is 13% more likely to have purchased draw games in the past 30 days, according to Nielsen Prime Lingo. Additionally, lottery players who shop Costco in the Phoenix region have higher weekly grocery baskets. But the question: how do you get the attention of a Fortune 20 company?

“I started out with a letter to the CEO and the CFO,” Demas said, matter-of-factly. It worked. “It was forwarded down to a vice president, who was initially excited at the prospect of carrying the lottery but didn’t know logistically how it would work with his organization.”

Due to Costco’s business model, as well as their customers and employee benefits, adding lottery to the product mix would be very difficult. First and foremost, the cost of selling lottery. With cashiers earning well above minimum wage, the labor behind restocking, selling and offering lottery tickets would be cost prohibitive.

Another challenging facet of the Costco model for lotteries is that all products in Costco are discounted. “Costco prides itself on providing a value to their members in every product they sell. This comes in the form of a discount delivered to the customer. It only makes sense that the sale of lottery products would follow suit,” said Arizona Lottery Executive Director Gregg Edgar. There were also concerns about the lottery footprint and customers’ perception of lottery products. Any one of these would be problematic enough for many lotteries to abandon the initiative, but the Arizona Lottery and Costco were able to work together to overcome them.

To make the venture worthwhile, the price point for the Costco product would have to be larger than any single ticket could support–like $100 large. Instant tickets are the most consistently popular lottery games in the U.S., but every cent is accounted for: prize payouts, vendor fees, overhead, retailer commission, and of course, the return to good causes. Each one of these interests wants to maintain their percentage, so discounting these tickets by an additional 10% would be difficult, but that is what they did. 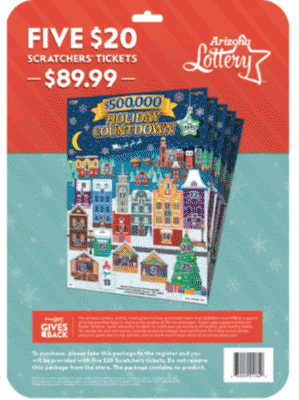 Furthermore, as a Scratchers ticket’s price increases, so does the prize payout percentage. Up until this point, Arizona’s highest price point was a $30 instant ticket and the viability of a $50 ticket in their market was questionable, so a “discounted” $100 ticket would be impossible.

“To make this model work, we looked at other industries to see how they [discounted their products],” Biju Kamaleswaran, former Deputy Director of Operations, Arizona Lottery, explained in the Arizona Lottery’s presentation La Fleur’s 2019 DC Conference. “All of them were bundling.” Arizona Lottery also had learned from the British Columbia Lottery Corporation and had extensive conversations with them on a pilot they had done in Canada with bundling of tickets.

Another roadblock to selling in Costco stores was logistics. The cost of selling lottery products was too time consuming for employees earning well above minimum wage so restocking, security management and checkout time are all measures that would make lottery either unprofitable or not profitable enough for the company.

The Arizona Lottery implemented a Route Sales Specialist Model to solve the problem. A lottery Route Sales Model, successfully used by the California Lottery in CVS for years, shifts the cost of selling, stocking and delivering products from the retailer to the lottery itself. “Almost everything to do with the Lottery is handled by our internal sales staff rather than the retailer,” said Raynie Hosto, Arizona Lottery Deputy Director of Sales.

Despite these creative solutions for Costco’s concerns, the project launch was delayed indefinitely. “We started in August 2017 and thought we had gotten to the point where we were going to get a final approval in April 2018,” Edgar said. “But it was not approved.” 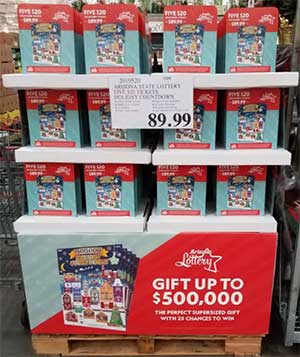 After months of follow up with the retailer, a phone call in October yielded an answer. “We asked if this was a dead issue for Costco. Their Vice President finally said, ‘Let’s just do a pilot in four stores. Can you get the program up and running in two weeks?’” Edgar recalled. “I said, ‘Absolutely!’”

With the holidays around the corner and new seasonal tickets fresh on the market, there was an immediate opportunity for Costco to take advantage of incremental sales. Both Costco and the Arizona Lottery assumed there would be increased demand for tickets during the holidays and the retailer agreed to sell the Lottery’s new $20 “$500,000 Holiday Countdown” ticket. “Though the $20 price point was not our most profitable product for this model, we weren’t going to say ‘no’ to Costco after they asked us to do it,” Edgar said.

It took a monumental effort to accomplish everything on a two-week timeline, and new problems arose quickly. For instance, the physical bundling required repackaging tickets specifically for this retailer in a safe and secure manner. The reduced timeline meant that a ticket print vendor couldn’t customize packages ahead of time. Tickets had to be manually shrink wrapped together to be delivered to the stores. A team of five spent several days to wrap over 6,800 packages. “We ended up getting a second shrink wrap machine which helped,” said Hosto.
Another challenge was that Costco couldn’t be licensed within the truncated timeline, so the Arizona Lottery included the pilot stores under the Lottery’s license allowing the tickets to be activated and packaged at Arizona Lottery Headquarters.

Activating the tickets ahead of time created a significant security risk. Security officials, the customer service and sales team, and IGT worked hand in hand to make sure every step of the process was secure. They even used two man teams to deliver the tickets.

The process wasn’t easy. “The integrity of the game could not be compromised, that is first and foremost to everything we do… [What we did was] not the most practical, not the most efficient, but it was being done to prove to Costco the value of the lottery,” Edgar said.

The end result was a program so successful that within two weeks the Costco team expanded the pilot to all 17 stores in Arizona and, a couple months later, Costco and the lottery teamed up again to sell a new line of tickets.

The Holiday Countdown package resulted in $505,100 in sales at Costco locations across Arizona. The next ticket, $10 “Triple Red 7’s”, was not expected to perform as well but actually did better, totaling $614,600 in sales. On average, each store saw a $6,441 increase.

“These numbers aren’t huge. It is 17 stores in our state,” Edgar said. “But Costco was very pleased with how it went. We are thinking about this opportunity in terms of the broader impact to determine if we could get a vending model in their stores. So we looked at this as a way to prove to Costco that their members play lottery and want to buy lottery.” 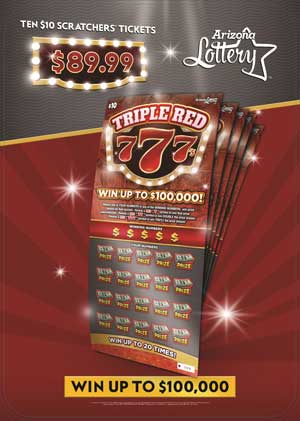 The lottery achieved that second goal in the pilot. Costco had worries that labor costs and the Lottery’s footprint would prove too challenging but, by displaying placards in “placeholder” displays that members purchase at the register and then take to the merchandise pickup desk, both concerns were addressed. Also, Costco had concerns regarding how their members would react to the store selling lottery. They received no complaints because, as the lottery research had indicated, the typical Costco member already wants to play lottery.

What was a surprise to the lottery, however, was other retailers’ reaction to Costco joining lottery’s retail network. One might have expected discontent since Costco is arguably a new competitor.

“We didn’t receive negative feedback from our retail base. We had one retailer make one comment. He thought it was ‘neat’,” Holly Gordon, Corporate Account Manager, Arizona Lottery said.

The lottery’s future with Costco is still undetermined. The lottery is working with Scientific Games to adjust the way bundled ticket packages are activated, but the ultimate goal is vending machines.

“We’re working toward a vending model. The trick is building in the value pricing model that will work with the vending machines. We’re working closely with our partners at Scientific Games trying to come up with a model where we can offer bundled services,” said Edgar.