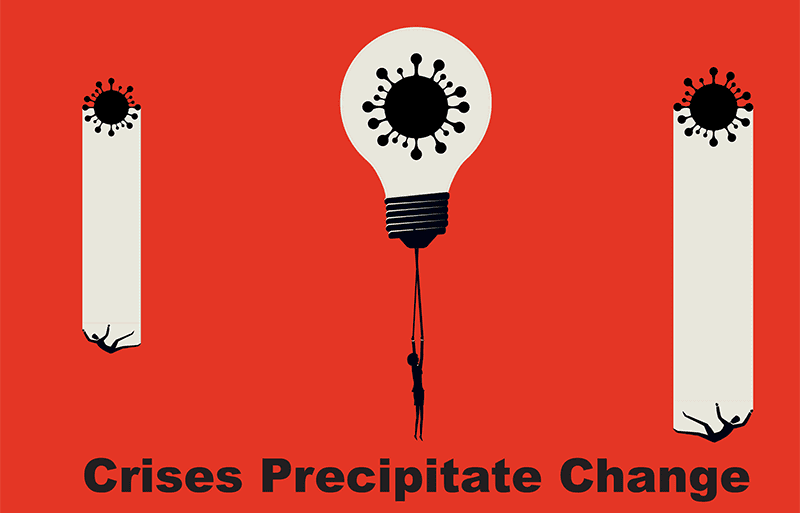 The business environment is in dire straits due to the pandemic. People, from rural towns to sprawling metropolises, have been forced into new habits, which in turn has crushed some corporations. Yet, lotteries across North America have changed their strategies to stay relevant with their players. From online happy hours to extensive technological upgrades, lottery marketing teams are trying new ideas. Only time will tell which strategies will be permanently adopted, but for now, the crisis, like Pandora’s Box, has had the small, often overlooked benefit of unleashing the industry’s creativity.

With social distancing mandates in place, state fairs and concerts are no longer an option. However, these events were a meaningful way to get the lottery brand in front of players.

The Arizona Lottery, DC Lottery, and Texas Lottery all turned to social media. The channel has been growing in importance for years. Before the pandemic, the Arizona Lottery planned to increase their internet media spend in FY20 to 12.5%, up from 8.6%. It also intended to decrease its television advertising spend from 12.7% to 10.4%.

In May, the Arizona Lottery streamed a virtual happy hour. The Arizona Lottery mascots—Windfall Willie and his sidekick, Derek—who are played by two improv actors, hosted the live video call. The campaign reached 27,937 people.

In June, the Arizona Lottery brought the improv team back for a second virtual happy hour, tying it with their “Beat the Heat” campaign, which multiplied players’ weekly winnings by whatever the hottest temperature was in the state. The campaign reached 40,886 people.

The DC Lottery launched a weekly two-hour player appreciation activity. The lottery hosted a virtual show on their Instagram page. A local DJ provided musical entertainment, while the lottery handed out $1,000 or more in prizes. 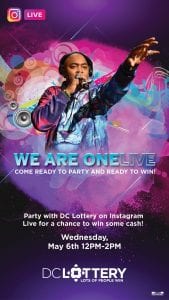 “We Are One Live was a success for DC Lottery. Over the course of just four weeks, DC Lottery’s following on Instagram grew by 1,363 followers, a 3,686% increase on the lottery’s average growth, and a 43% increase in followers overall. The positive response prompted our current #DCLove series. This monthly IG program invited players to submit photographic images that convey their appreciation for the District of Columbia for the chance to win cash gifts and prizes. So far, the DC Love campaign has amassed 422,913 impressions, 1,397 impressions, 213 follows, and 1,043 uses of the #DCLove hashtag,” Nicole Jordan, Director of Marketing, Office of Lottery & Gaming, said.

The Texas Lottery also had to pivot to virtual events. Over the past few years, the lottery has been associating its brand with music. It has sponsored the Texas Lottery Live Concert Series at Toyota Music Factory. In 2018, it started Luck Happens Live, a concert series hosted by the lottery.

One of the first casualties of the pandemic was live music concerts. The Texas Lottery Live Concerts stopped after March 3rd. However, seeing an opportunity, Brand Strategy Coordinator Andrew Leeper and the Texas Lottery team decided to change strategies and stream a concert to players desperate for live music.

Over the summer, the Luck Happens Live concert series streamed two concerts. With over 30,000 views per event, each had strong fan engagement and tapped into pent up demand for live music. The music world certainly took notice as the Rolling Stone even mentioned the Texas Lottery in a writeup.

The Texas Lottery worked with Margin Walker to negotiate talent and location. Leeper and his team also worked with IX Media, a film production crew, to provide an incredible experience for their players.

“For us, the location was key. Lots of brands were attempting streamed concerts. We wanted to stand out by choosing visually stunning, nontraditional locations to film a concert. In each case, the location was hand-selected to complement the artist and provided multiple ‘sets’ to keep it interesting,” Leeper said.

Each show lasted 40 minutes with an extra 15 minutes in bonus footage for VIP winners.

“Not only were they able to see free live-streamed concerts, but some lucky winners got to do a virtual meet and greet with the artists and win autographed merchandise from the artist. It was also a great way to tap into the more localized nature of the quarantine by showcasing homegrown Texas superstars, like Black Pumas and Shakey Graves,” Leeper said.

The pandemic has provided lotteries an opportunity to give players experiences they are lacking. “Now is an exciting time because music artists are more willing to work with brands on highly collaborative projects. With live music events paused, brands and bands can work together to find innovative ways to keep fans engaged. There is tremendous pent up demand for live music, and it provides lotteries with endless opportunities to reach new potential players if we are creative,” Leeper ended.

When U.S. lotteries’ claims facilities began closing in March 2020, the industry faced a unique problem. Players may not be able to receive payment for the prizes they won. Some players and retailers raised concerns about the cleanliness of cash, which created doubts about accepting cash prizes at retail.

The Ohio Lottery immediately reacted to the problem. On April 20th, they launched a mobile cashing feature on the Ohio Lottery app. The new feature could deposit prizes from $50-$5,000 directly into a player’s bank account.

The feature has been in the works for some time. Before September 2018, players could cash tickets between $600-$5,000 at a network of banks across Ohio. When that came to a halt, players would have to go to either one of seven racinos or nine regional offices across Ohio to cash mid-tier prizes. On average, these locations would reward 5,800 claims per month. To alleviate that burden, the Ohio Lottery investigated a new mobile cashing solution, built on the backbone of its MyLotto Rewards program. Because of the infrastructure already in place, development time was less than nine months. Since April, the Ohio Lottery has processed 33,000 claims through July 2020, about 13,000 claims per month.

Initially, the Ohio Lottery team intended mobile cashing to only pay out tickets from $600 to $5,000. However, the lottery changed strategy because of COVID-19. They reduced the prize threshold limit from $600 to $50 to help players when fears of the virus were exceptionally high.

The new system has already been paying dividends. It is convenient for players because it helps maintain social distancing. It also helps the state. The Ohio Lottery can easily keep track of suspicious transactions, particularly when a player cashes a large amount of winning tickets at once. It can also immediately deduct unpaid state debt and child support from winning prizes.

Other lotteries implemented out-of-the-box solutions. The Arizona Lottery tried a different method. Instead of using an application, it used gift cards with a file-based ordering system from InComm.

Lottery staff could upload winners in a CSV file from their contests like Beat the Heat and automatically distribute payments. Players would receive a digital gift card, which was like a credit card, in an email with instructions on how to redeem it, transfer it to their bank, PayPal, or Venmo account.

Along with a global pandemic, the U.S. lottery industry struggles with a jackpot drought for its two national bloc lottery games, Powerball and Mega Millions. Between July 1, 2019 and April 8, 2020, players have won the Powerball jackpot eight times. The jackpot had only increased by more than the mandatory $10 million on three of those eight jackpots, and in total, it had risen by more than the mandatory minimum for roughly 28% of the 81 draws in the time period. The two $80M jackpots and the $70M jackpot were likely underfunded.

“In the wake of the public health crisis, declining game sales and plummeting interest rates created a situation in which immediate action was needed to ensure that ticket sales could support the Grand Prize and other lower-tier cash prizes. The Powerball Product Group did not want to jeopardize the financial future of the game, especially since Powerball is an important product in our portfolios for generating proceeds for good causes,” Sarah Taylor, Executive Director, Hoosier Lottery and MUSL Board President said.

With the looming threat of an unfunded win, MUSL decided to lower the guaranteed Powerball increases by $2 million and the starting jackpot to $20 million. Then MUSL announced that Powerball’s advertised jackpot would be based on game sales and interest rates, following the April 8 drawing, due to the pandemic. It was fast decisionmaking.

However, Powerball’s problems are far from solved. Jackpots are taking longer and longer to fund themselves. Players’ “jackpot fatigue” is widely considered to be the reason. A long-term solution to fatigue might not even exist. If one does, lotteries must collaborate and be willing to test new things.

First, MUSL is already planning changes to the game. “We are excited about the future of Powerball and some of the changes we have been discussing and developing. The Powerball Product Group and several MUSL Committees have been researching numerous options to address product relevancy, jackpot stagnation, and new options to the existing game. To make an informed decision, it has been a heavy lift of research and information sharing,” Taylor said.

But many lottery executives believe that the place to start is focusing on the brand. “We need to start thinking like a national brand. We think we are, but we do not act like we are,” said Oklahoma Lottery Deputy Director Jay Finks in a panel at La Fleur’s 2020 Final-e-Conference. “We need to think about what we can do nationally to promote the brand and gain more exposure and gain more efficiencies. To buy media nationally is so much more effective and efficient than what do we do locally.”

According to a Mega Millions study from 2016, the Powerball brand is one of the most recognizable brands in the United States. “We should be with major brands like the NBA and NFL. When you start talking about the dollars we can create, watch who comes to us,” Finks said. “A national campaign also alleviates a burden on the local level to advertise and promote. Then you can focus locally on what you want to focus on.”

By pooling the money, Powerball can also continue to stand out in a crowded marketplace. “We have media schedules that include national programming, prime time programming, national sports programming. We are there with Coors and Budweiser. To stand out, we need that level of production quality,” Colorado Lottery Director Tom Seaver said.