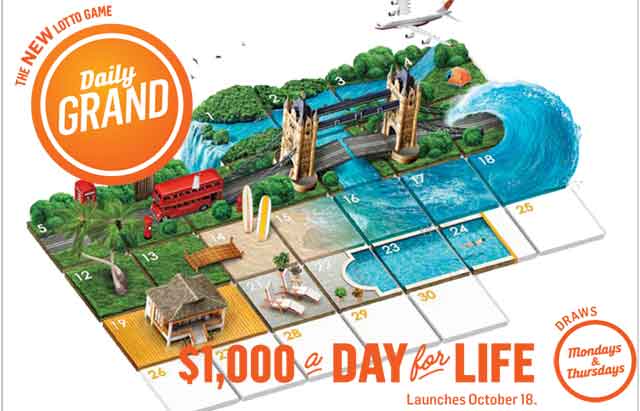 Bloc members used “shared advertising” for the six-week mass market launch. “The shared advertising appears to be performing well and a second round of advertising support is on air between January and March (dates vary by region),” said Emily McDonald, Senior Category Manager, Lottery Marketing, BCLC.
“ALC intends to use the shared creative that’s been developed and already featured in the other regions,” she added.

Daily Grand is off to a strong start. “It is too early to comment on sales and profit versus expectations, but the sales line is relatively stable and cannibalization of other products appears lower than anticipated,” said McDonald. “The post-launch research has shown strong results for brand appeal and ease of understanding, and awareness is continuing to grow.”

SidLee Montreal created the Daily Grand advertising. The campaign promoting Daily Grand illustrates the myriad of possibilities available to the winners of C$1,000 a day for life.

For the TV advertising, the daily nature of the top prize is emphasized by following the unfolding story of how the winner’s life changes on a calendar.

There is no official slogan/tagline for Daily Grand. “The TV spot ends with ‘Imagine the rest of my Daily Grand life.’”

There is no national digital advertising buy for this game. “Each region has developed its own marketing plan, but each has utilized social media and digital to some degree,” said McDonald. “For example, BCLC ran a contest during launch that was purely promoted via social media and leveraged social media influencers. There is a national Daily Grand Facebook page that regions can leverage for geo-targeted posts as well.”

Buy X/Get Y promotions are used to support trial. “Nationally, we have the ability to run promotions that offer additional prizing through bonus draws and also increasing the prize amount of the top or secondary prizes for a promo period,” said McDonald.

“Regionally, each lottery jurisdiction has the flexibility to run additional ‘Buy/Get’ offers. OLG offered a free Encore with the purchase of Daily Grand and observed very strong sales results during the period they ran this promotion,” she added.