NFL Tickets on the Market 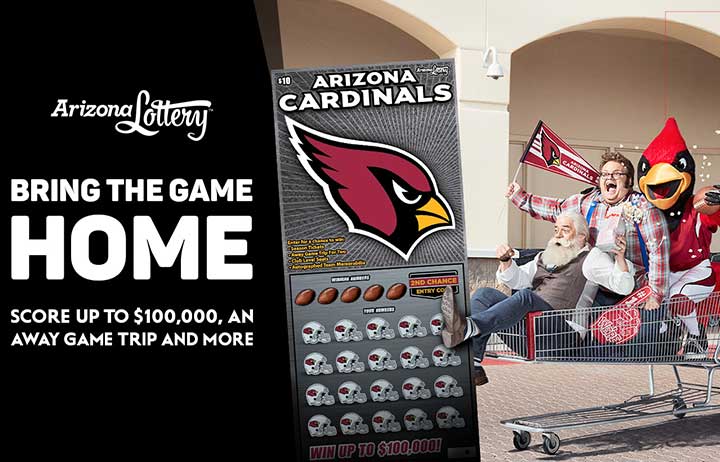 The Arizona Lottery and the Arizona Cardinals teamed up again to bring back the popular Arizona Cardinals Scratchers® ticket for its second season.Last year, the two organizations introduced the exclusive ticket to lottery players and football fans alike.

“Arizona Lottery is thrilled to continue its long standing partnership with the Cardinals and bring back this fan-favorite with even bigger cash prizes,” said Arizona Lottery Executive Director Gregg Edgar. “We had an incredibly successful launch of this ticket last year, and we can’t wait for Cardinals fans to start winning with this ticket this year.”

The Cardinals scratcher ranked as one of the lottery’s top three $5 games as ranked by the first 12 weeks of per capita sales in fiscal 2017.

This season, the ticket kicked off on August 1, 2017.  “The ticket has more than 96% penetration at retail; however, we do not have a good index or sales number yet as this is usually skewed by initial distributions,” said Chris Rogers, Director of Products & Marketing, Arizona Lottery. “Key to selling more tickets will be our planned retail activations, generating in-game/event awareness, and, leading with a strong start in market. A winning team would also be nice!”

“We’re pleased to kick off another year of our long-term partnership with the New Orleans Saints,” said Lottery President Rose Hudson. “Besides offering added play value on the back of the scratch-off, the SAINTS GAME ON! second-chance drawings feature more winners than ever before.”

The ticket features three scenes, including Sir Saint, football and fleur de lis backgrounds with metallic gold ink, plus a bonus scratch-off area on the back of the ticket, four top prizes of $100,000 and the opportunity to enter non-winning tickets into a series of second-chance drawings to win unique game-day prize experiences or official autographed Saints merchandise.

The Massachusetts Lottery is saluting the New England Patriots winning tradition with the introduction of the 5X CHAMPIONS scratch ticket.  It is the lottery’s fifth Patriots-branded offering since 2009.

The Massachusetts Lottery’s portfolio of Patriots-branded tickets has amassed more than $209.7 million.

The Maryland Lottery and the Baltimore Ravens have teamed up for the ninth consecutive year to launch Ravens-themed scratch-off tickets and second-chance drawings.

There are two tickets—a $5 and $2 scratch-off. The popular second-chance contest also returns offering prizes including season tickets for 20 years and a trip with the team to watch the Ravens play the Green Bay Packers in Wisconsin. The $5 Ravens ticket features five $100,000 top prizes, while the $2 ticket includes 10 top prizes of $20,000.