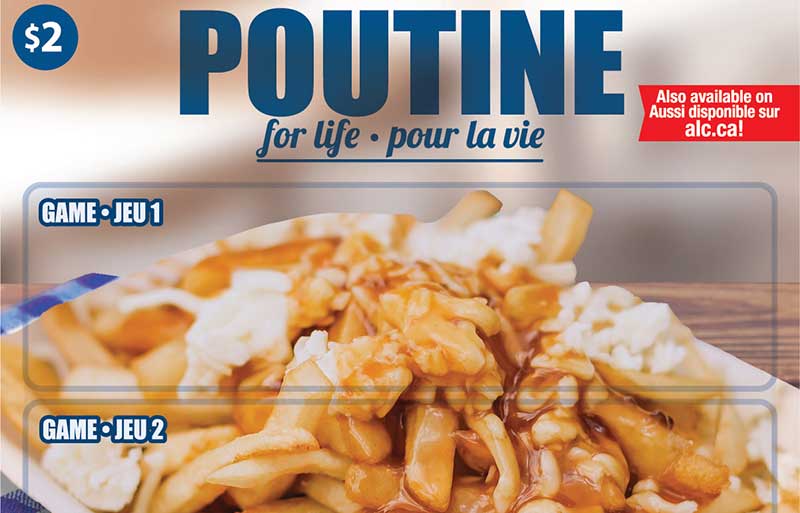 Atlantic Lottery Corp. (ALC) will launch Poutine For Life scratcher at retail and on ALC.ca in July. It is the ultimate comfort food comprised of cheesy French fries topped with brown gravy.

ALC anticipates the Poutine theme will generate significant hype. “The popularity of this famous Canadian dish is growing, especially amongst younger Canadians,” explained Merrill Fullerton, Marketing Manager, Instant Games, ALC. “We came across research that indicated Poutine’s appeal doubles every generation and today close to half of all Millennials rated it as their favorite homegrown food. At the same time, our friends at Loto-Quebec had recently launched a successful Poutine-themed scratch ticket so we decided to build off that idea.”

“Donairs are an Atlantic Canadian incarnation of the Greek gyro and are hugely popular across the region,” said Fullerton. “Mucho Donair-O did well sales-wise but also generated hype for our scratch category, including a lot of earned media. So we have some history with these types of games that gave us the confidence to go ahead with Poutine for Life.”

ALC purposely chose a low $2 price point, hoping it will motivate younger casual and non-players to buy a ticket. “With $2 games being the entry point for the category, it only made sense to launch at this price. Not only is it inexpensive, but like most of our $2 games, Poutine for Life features simple, easy-to-understand play mechanics,” he explained.

The lottery chose to kickoff sales in July as it wants to capitalize on the festival season which hits here in the summer. “Atlantic Lottery is going to have a strong presence at several festivals that are geared towards the under 35 demographic, so we are also going to leverage these events to promote Poutine for Life,” said Fullerton.

Poutine for Life scratch sales at retail are estimated to be about $1.1 million over 15 weeks, while ALC expects Poutine for Life digital instant to generate around $300,000 over 25 weeks on alc.ca.

For promotion, ALC will be supporting with “some influencer marketing within social media channels, through our 2 Chance program and within some of our event sponsorship activations,” he said.

The top prize for the scratch and digital game is Poutine for Life. It is awarded as a restaurant gift card valued at $10,000. “But of course we provide the winner the option of taking the cash equivalent,” said Fullerton.

Poutine was introduced in Quebec in the late 1950s. Today it is a staple on Canadian restaurant menus. “In Atlantic Canada, we do have a significant Francophone population so Poutine likely resonates in this market even more than other parts of the country,” said Fullerton.
The Poutine scratcher is a good example of ALC’s omni-channel strategy. “Poutine for Life is a good example of how a game theme launched in both channels simultaneously creates marketing efficiencies and can help boost overall sales. It is also a good example of how games can be delivered to players in the format and channel of their choosing. We have launched games with even stronger omni-channel characteristics and will continue to develop those types of programs, while also rolling out cross-channel themes like Poutine for Life,” ended Fullerton.