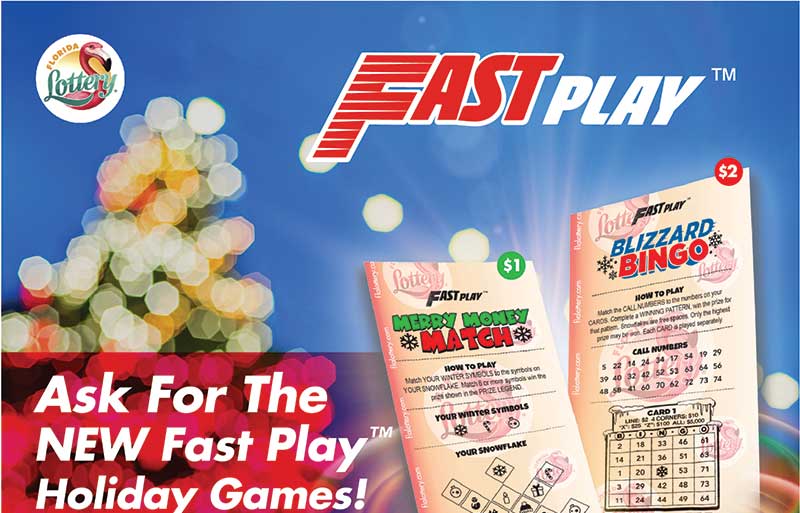 U.S. lotteries do not traditionally run big holiday promotions for their draw (terminal) games. But there is definitely a pickup in the number of lottery jurisdictions that now offer a holiday game for their instant terminal games (ITGs).

This year, the Florida Lottery is offering its first-ever, holiday-themed Fast Play™ games. “The $1 game, MERRY MONEY MATCH, and $2 game, BLIZZARD BINGO, will be offered in conjunction with our Fast Play games already on sale. The holiday games will run for a limited-time, with sales beginning on November 1 and ending in January. BLIZZARD BINGO also marks our first extended play Fast Play game and we are excited about the product line expansion opportunities these games and new playstyle bring to the terminal games portfolio,” said Shelly Gerteisen, Director of Product, Florida Lottery.

While there is no specific holiday program for its draw games, the Arizona Lottery will sell a $1 “Fro$ty Fun” Fast Play game.  It will also offer a 2nd Chance promotion surrounding the holiday campaign.  All non-winning holiday games tickets will be eligible.

The New Mexico Lottery will offer Jingle Bucks Fast Play games during the holiday season. “In December, we plan to add ‘To:’ and ‘From:’ tags on the top of our draw tickets,” said Wendy Ahlm, Marketing Director, New Mexico Lottery.

The DC Lottery will sell one holiday Fast Play game. Candy Cane Cash launched early in 2018 as it was included in the Holiday Bucks 2nd Chance Contest.

The Pennsylvania Lottery includes its draw games in a separate Holly Jolly Second-Chance Drawing, which also includes its Fast Play and Scratch-Off games. “This Second-Chance Drawing offers prizes worth more than $1 million of which $400,000 in prizes will be awarded for players who enter winning or non-winning draw game tickets,” said Stephanie Weyant, Deputy Executive Director, Marketing & Product Development, Pennsylvania Lottery.

Maryland Lottery’s holiday draw game promotion is positioned as a “thank you” for its Pick 3/Pick 4 players, its most loyal group. “Vouchers for $1, $2 or $5 will be randomly awarded for purchases of our daily numbers games. These low-dollar ‘bonus’ wins are a favorite among players, who see this as an opportunity for extra chances to play and win. In fact, they frequently reinvest these vouchers right back into the games in the hopes of receiving even more ‘bonus’ plays,” said Leo Mamorsky, Managing Director, CMO, Maryland Lottery & Gaming.

The Missouri Lottery will be running a holiday promotion called “Second Chance of a Lifetime: Royal Holiday” in addition to its Scratchers as Gifts campaign. “Players can enter $10 worth of holiday-themed Scratchers and eligible draw games into the promotion for a chance to win their choice of trips or cash,” said Rhonda Fehr, Advertising Manager, Missouri Lottery.