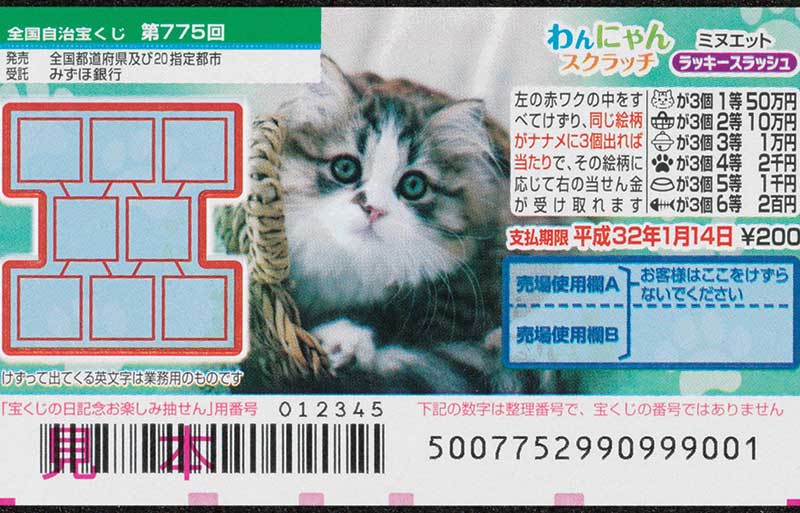 In the New York Cat Film Festival, a “lucky cat” named Hachi is featured in the film short entitled “Cat Nation: A Film About Japan’s Crazy Cat Culture.” This documentary illustrates how the Japanese revere cats, including dedicating an island for a community of cats and naming a commuter train after a feline. The film includes a spotlight on Japanese lottery retailer. This tobacconist, who is based in Mito, Japan, has sold many winning tickets. His cat is known as the “Cat with the Lucky Eyebrows.” This snowy white cat is known by its distinctive black eyebrows.

Pet-themed scratchers are quite popular in Japan. “The ‘Wan-Nyan’ series of scratchers, are very popular, and sold at numerous retailer shops throughout in Japan,” according to a representative of Japan Lottery Research Center Inc. “Wan means bow-wow (dogs’ bark). Nyan means meow-meow (cats’ mew).”

The cat-themed Nationwide Autonomy Lottery No. 775 features a top prize of 500,000 yen. It costs 200 yen. The 47 prefectures and 20 designated cities issued these scratchers in order to raise money for good causes. Mizuho Bank sold these scratchers to the public (through various retailers) as trustee to Japan’s lottery system.