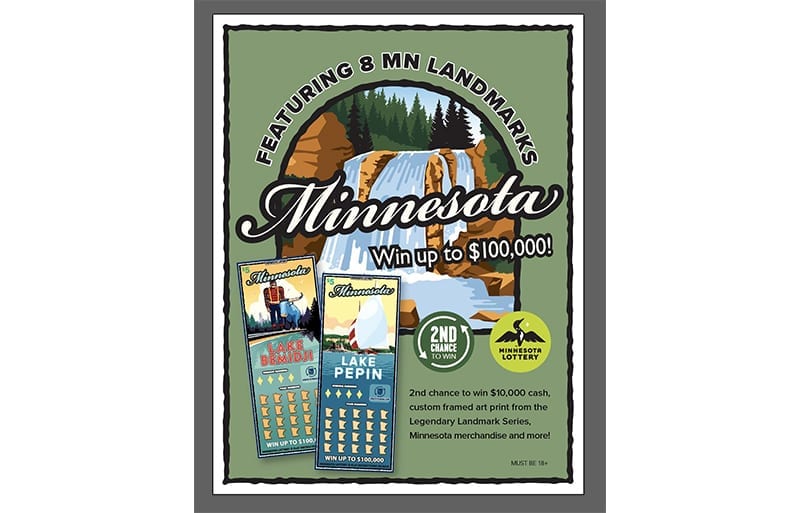 “We loved the DC Lottery tickets from several years ago called ‘Neighborhoods.’ They highlighted many different designs tied to specific neighborhoods in DC. We thought we could do the same concept with different scenes that cover the diverse geography of Minnesota,” said Jason LaFrenz, Chief Marketing Officer, Minnesota Lottery.
Many of the featured tickets are beneficiaries of the Minnesota Lottery funding. “The tickets are uniquely Minnesota, reinforce the beneficiary message about the dollars that go to support the environment and also reinforces a ‘Get out and Play’ message that resonate with lottery ticket sales and exploring Minnesota Landmarks in the summer,” he explained.

In deciding which landmarks to feature, the lottery “selected scenes from all of the different regions of our state. We highlighted the forests and lakes of Northern Minnesota, several iconic images from the Twin Cities and several scenes from Southern Minnesota prairie and river bluff lakes,” said LaFrenz.

The ticket proved difficult to promote during the pandemic. “We had an extensive marketing plan in place to promote the different MINNESOTA Landmark tickets in conjunction with Explore Minnesota, our state tourism agency. We were planning to do events across the different regions of the state in conjunction with retailers and the ‘Landmark’ destination featured on each ticket,” said LaFrenz.

The lottery turned to digital promotions. “We created some great 15-second social media videos that had moving animation and graphics (and a unique twist) for several of the tickets. These spots were promoted heavily online and through our Facebook page,” said LaFrenz.

The Landmark ticket designs came from an existing artist. “His designs are well known in Minnesota and are sold as prints online and at retail locations. The artwork is very well known and recognized by Minnesotans and featuring it on scratch tickets was a good association for our brand,” said LaFrenz.

Players have a chance to win a Minnesota Landmark framed art print by entering non-winning tickets in a Second Chance Promotion. The grand prize is $10,000.