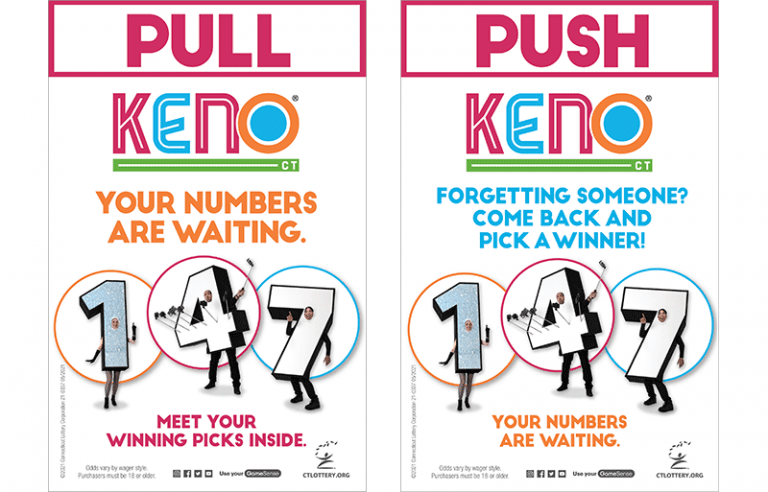 The Connecticut Lottery Corp. (CLC) created a new Keno advertising campaign featuring 12 Keno characters who want their “number” to be picked. Each Keno number (1-12) represents a different personality, such as the Serious One or the Lucky One.

When the lottery was brainstorming concepts for Keno, it gave the agency the directive that it wanted to use humor.  “Keno is now five years old in Connecticut, so awareness is high,” explained Pete Donahue, Senior Director of Marketing, CLC. “This is our third generation TV spot. We already covered awareness and where to play in the first two campaigns, so we wanted to be informative about the game.”

CLC loved this execution and the concept of the numbers having personalities and wanting to be picked.  “Many (including us) have done the where do YOUR numbers come from. To us, building a campaign around the numbers and their personalities is great—clever, like the M&M’s campaign and one that can have legs and many extensions,” he said.

Not surprisingly, many of the characters’ “personalities” are based on what number they represent. “For #1, well—she’s #1 . . . lol, Lucky #7 and we love that #4 is the star since Keno is played every FOUR minutes (informative). Some of the other personalities were born from how they looked visually and the imagination of our creative agency and lottery team,” said Donahue.

CLC will also use the three stars of the ad campaign—#1, #4 and #7—on POS and OOH. “We love creating these personalities and perspective of numbers wanting to be picked. We feel that it will resonate with all Connecticut consumers,” said Donahue.

CLC is also looking how they might be able to use the Keno characters in the future. “For instance, we turn 50 next year, so we intentionally had that costume created and may indeed use it,” said Donahue.

To keep costs down, the lottery had to narrow down to 12 characters. “We wanted a manageable number (both for cost and character building). We are doing five spots and wanted some overlap,” said Donahue.

In terms of CLC’s expectations about the sales impact with the ad campaign, Donahue said: “Keno has continued to trend up, so it’s difficult to quantify an expected sales impact. We do think that it will be a well-timed campaign to put focus on Keno as bars, restaurants and taverns start to open back. I also believe that this is the type of campaign that will have an ‘umbrella’ effect since numbers encompass the entire lottery category.”