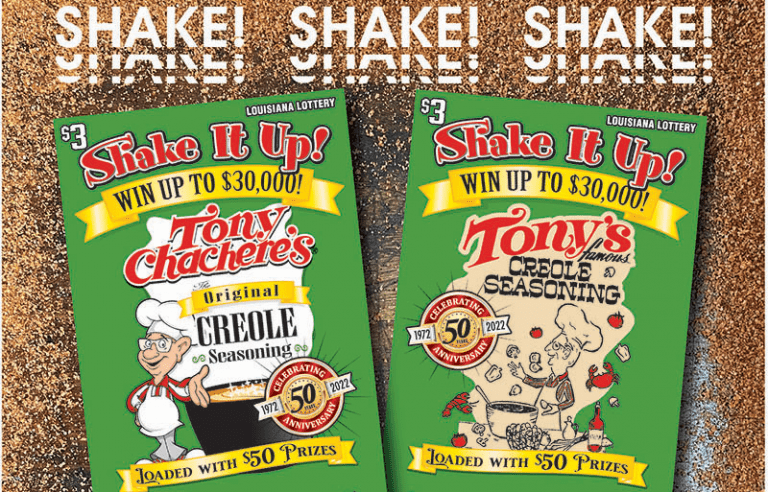 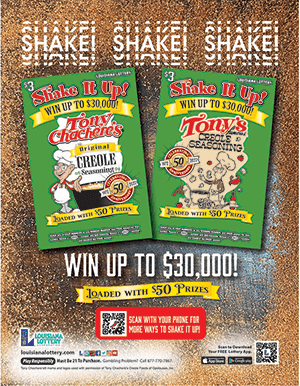 To celebrate the 50th anniversary of Tony Chachere’s Creole Foods, the Louisiana Lottery Corporation has once again partnered with this quintessential and beloved Cajun seasoning brand to launch a $3 scratch-off, Shake It Up!

This spring, the lottery’s promotional focus will be on this strategic alliance game as opposed to its family of games (FOG) scratcher lineup. “Most of our ‘extra’ marketing support will be directed to our $3 Shake It Up! scratch-off and strategic alliance with Tony Chachere’s Creole Foods instead of our gems FOG,” explained Susan Clayton, Products Director, Louisiana Lottery Corp.

Last year, the lottery began introducing different play styles on its $3 price point, which had previously been reserved for extended-play games like Crossword and Bingo.

“We are launching Shake It Up! at the $3 price point with a key-number-match playstyle this time around. A similarly themed $1 game Craw Fish will round out the launch, which coincides with the kick-off of the ever-popular crawfish season in Louisiana,” said Clayton.

The Louisiana Lottery will run a series of player and sales promotions in March and April, including a social media/web-based promotion. Entrants are invited to upload a picture of themselves with a can of Tony Chachere’s Creole Seasoning and a Shake It Up! scratch-off, as well as share their favorite food on which to shake the creole seasoning for a chance to win a prize package filled with Tony Chachere’s products, merchandise and a co-branded Lottery T-shirt.

Winners will be hand-selected by the Lottery’s communications team for their originality/photo quality during the promotion, with one winning entry shared on social media afterwards to extend the life of the content.

“To increase the awareness and frequency of radio advertising promoting the game, the Lottery will conduct a listener call-in promotion on 15 radio stations throughout the state. Radio DJs will be given talking points regarding the Lottery’s Shake It Up! game and Tony’s 50th Anniversary. A prize package will be awarded on each station each weekday,” said Kimberly Chopin, Director of Communications, Louisiana Lottery Corp.

“Finally, after a long hiatus, the Lottery hopes to take its promotional sales van, a.k.a. LOLA (Louisiana’s Onsite Lottery Attraction) on a statewide tour during the month of April to generate sales and brand loyalty with a series of two-hour retailer promotions. These will involve a special Lottery/Tony’s giveaway with a $15 Shake It Up! and/or Craw Fish scratch-off purchase. Players who purchase $20 worth will also receive an entry to win a Shake It Up! Prize Package,” added Chopin.