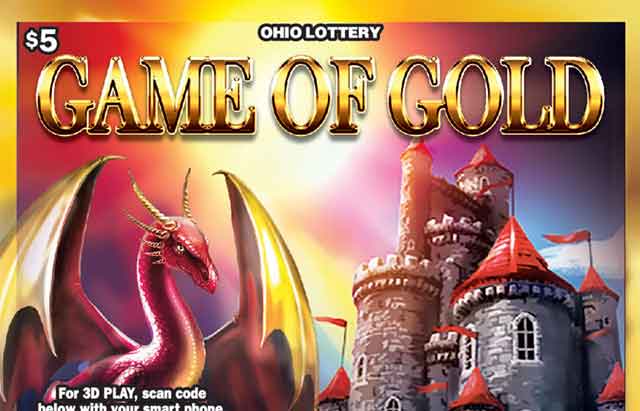 The Ohio Lottery will launch its first 3D instant ticket, called Game of Gold, in March 2017. It is a $5 ticket.
“We were approached with the concept around the time that everyone was PokemonGo crazy,” said Ohio Lottery Executive Director Dennis Berg. “We thought it might be interesting to try. We are finalizing the launch date in light of other items on the calendar. We anticipate the game launch on March 15.”

Players can play the ticket in the typical fashion or they can activate the 3D feature to play the augmented reality (AR) scratcher on their mobile phones.

“Users must download the app in order to play the ticket in 3D,” said Berg.

Scientific Games will print the instant ticket. The vendor also handles the licensing arrangements for the ticket. “Our contract for licensed properties is through Scientific Games,” said Berg.

The 3D play mechanism allows a player to virtually enter a castle (which is prominently featured on the ticket).
“The player swipes to move around a 3D castle and to open the castle windows and reveal their coins,” explained Berg.

Currently, the lottery has not released projected sales for the 3D ticket. “We don’t have estimated revenues. We will index the ticket against other $5 price points,” said Berg. “We believe the added value of the 3D option will resonate with the $5 player.”

In terms of attracting a younger demographic, Berg said “we will be tracking the use of the application and other metrics. We don’t have a target demographic at this time.”

Concepts such as launching a 3D lottery ticket help lotteries to stay relevant. “Last spring, I had the privilege to judge game concepts at the NASPL Lottery Leadership program and the winning game used a virtual reality headset. I don’t think we comprehend the coming revolution,” said Connie Miller, Deputy Director, Operations at the Ohio Lottery.

A big question is whether a 3D ticket will have a longer sales tail. “One challenge is the limitations in programming game play options. Once players become familiar with the castle, they may skip the 3D portion. Paymax did add some changes to the New York Lottery’s digital offering which we will continue to monitor,” said Miller.