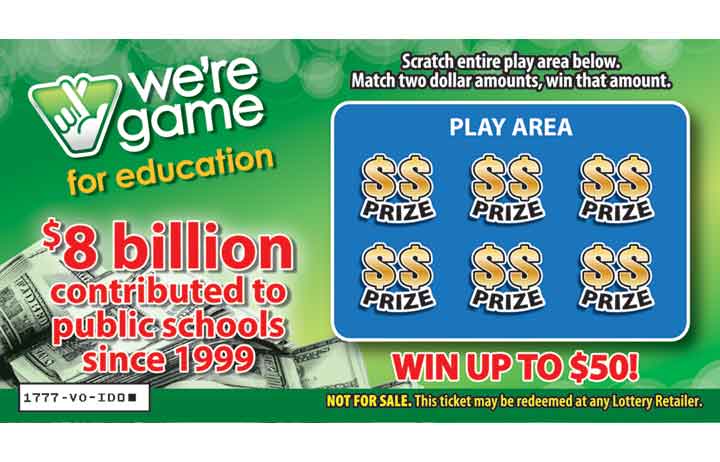 The Virginia Lottery launched a project in spring 2016 to help the community—particularly, educators—interact with its state lottery. It’s not a traditional scratcher. It can’t be purchased but prizes can be redeemed at any retailer.

“Initially there were two different versions of this game: one for the Communications Department and one for the Marketing (now Advertising & Gaming) Department. Both versions came loaded with winners: Overall odds: 1 in 1.99 with a top prize of $50. The Communications version also had a second-chance element, specifically for educators, offering a total of 210 $25 cash cards,” said Hagerty.

The Communications version of the scratcher is distributed at education-related events that the Virginia Lottery sponsors as well as at other appearances. “The Marketing version was used at non-selling consumer events, with the goal of giving those who may never have interacted with the Virginia Lottery an opportunity to have a fun, winning experience,” said Hagerty.

The 2.0 version is also called “We’re Game for Education.” But there is now just one version, which emphasizes the beneficiary message.

Many people who receive the ticket have never played the lottery. “So they get a first-time playing experience along with the beneficiary message. Additionally, the play area emphasizes the amount the Virginia Lottery has raised for K-12 education. When a non-player doesn’t immediately realize that the ticket is meant to be scratched, that person often takes a little more time to read the front of the ticket before scratching it, thus reinforcing the beneficiary message,” he said.

The ticket helps educate about the lottery’s mission. “Over the years, some people have questioned whether Virginia’s General Assembly actually uses Lottery profits for education, as required by the state’s constitution. It’s vital for the Lottery’s beneficiary message to counter that argument, especially to those in the education community, to show that Lottery profits really do go to schools. That being said, it’s far more common for people to simply not be aware of where Lottery profits go. With this ticket, we are placing the information directly into the hands of the audience we want to reach. We’re giving them the message in a fun and unique way,” he said.