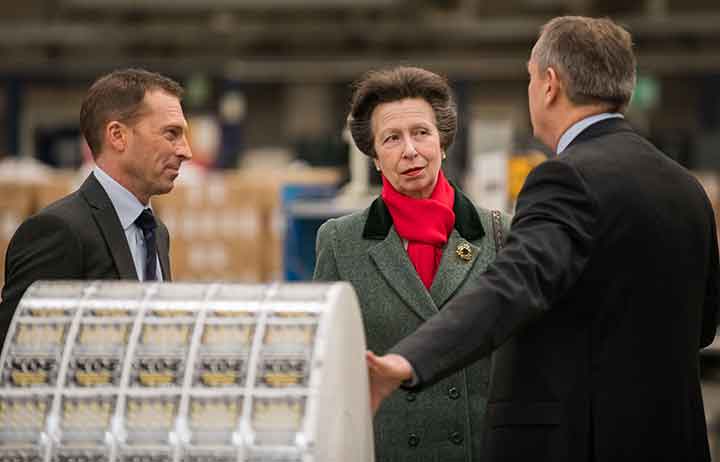 Scientific Games announced that Her Royal Highness, The Princess Royal, visited the Company’s Leeds, UK manufacturing and technology facility to celebrate 40 years of lottery instant game design and production in Yorkshire. Scientific Games is the largest supplier of instant games in the world, with five instant game facilities across four continents.

During her visit to the Hunslet site, Her Royal Highness was accompanied by the High Sheriff, as she was greeted by Scientific Games’ leadership and employees and World Lottery Association President Jean-Luc Moner-Banet as she toured the state-of-the-art facility and learned about the design and production process of instant games enjoyed by players in the UK and throughout Europe. Scientific Games was amongst the first to be certified by the World Lottery Association for both responsible gaming and environmental sustainability practices.

Scientific Games Leeds creates 6.8 billion of the firm’s 53 billion instant games per year (2×4 units), each contributing to the raft of good causes which is at the heart of every lottery program. On a global scale, lottery programs saw USD $82.4 billion donated to good causes in 2016 alone across a breadth of charitable enterprises, including initiatives for education, health and welfare, sports and the environment.

Kevin Anderson, Vice President, International Business Development, Scientific Games, EMEA, comments, “We were extremely honored to host The Princess Royal, and the visit recognizes the dedication of our talented team of designers, technologists and manufacturing professionals here at Scientific Games Leeds over the last 40 years.”

Her Royal Highness unveiled a permanent plaque to celebrate the visit and follows Scientific Games being presented with the Queens Award for Enterprise in the International Trade category in 2005.