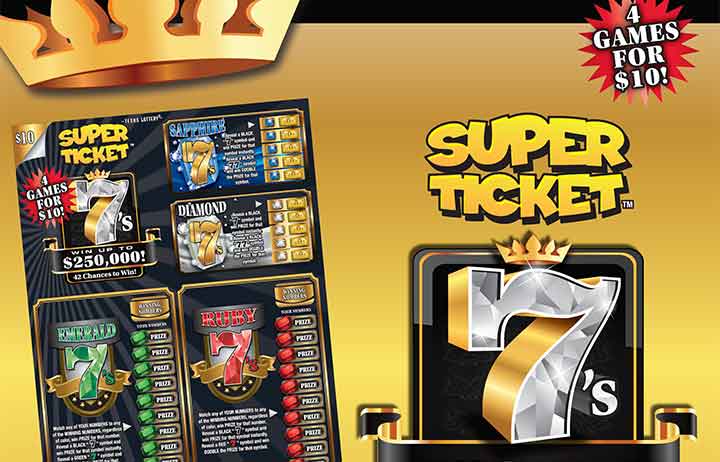 IGT’s Super Ticket™ continues to make a significant positive impact on revenue as a core part of a lottery’s portfolio. Both the Texas Lottery and the Kansas Lottery found their scratcher sales could be “super sized” by offering the Super Ticket.

Super Ticket was invented in Texas in 2015. After asking all three instant printers to provide concepts for an oversized ticket, Texas Lottery chose IGT’s Super Ticket concept, featuring a combined 7s-theme and gems theme with a black background. Super Ticket 7’s was launched in April 2015.

“Everything is Bigger in Texas, and that includes our scratch game tickets! We believe these oversized games have been successful because players like the larger size and the greater number of chances to win per ticket,” said Texas Lottery Scratch Ticket Coordinator Dale Bowersock.

Research shows high-impact merchandising and POS materials accelerate sales. “The initial success was due to the efforts of the IGT sales organization—they sold both the game and its associated larger dispensers in at our retailers. Thanks to their efforts the first game was introduced with around 90% penetration of the 17,800+ retail locations. At launch, we attached a voided, hole-drilled sample of the ticket on a retractable reel to the sides of the dispensers so the players could touch the ticket and experience it prior to their first purchase,” he added.

“We used Super Ticket originally as a Christmas gift,” said Kansas Lottery Executive Director Terry Presta. “We liked the size. You can’t miss it as retail. It offers a lot of value between the ticket size and lots of ways to win. We came in at $10 for the ticket. We weren’t sure that new players would want to spend $20. We have been very successful with it.”