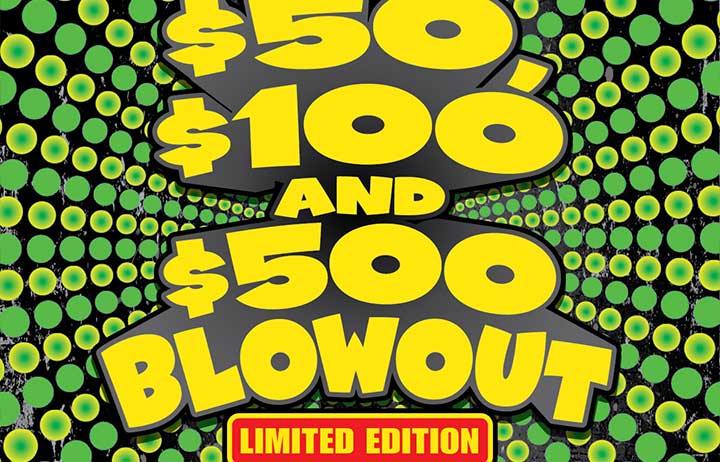 The heart and soul of the $50, $100 And $500 Blowout game concept was the prize structure, which offered a four times better chance to win a prize from $50 to $500 than any other Massachusetts Lottery $10 game. And the $500 prizes hadn’t been added to any other blowout games.

“Looking at market trends over the last few years, and following extensive focus group work, we knew the addition of $500 prizes would immediately make this game high impact and very appealing to players,” shared Jim O’Brien, VP of Strategic Marketing for Scientific Games whose strategies have been behind many of the industry’s top-sellers over the decades.
Featuring fluorescent inks and black graphics, $50, $100 And $500 Blowout did not disappoint. The game topped $70 million in sales in the first six weeks, twice the sales of a typical Massachusetts Lottery $10 game.

“The uniqueness of this game lifted our already strong $10 price point to yet another level. The game offers great value to players looking for a chance to win a prize that they will find satisfying. An added plus is that all prizes can be claimed at any retail location,” said Ed Farley, Assistant Executive Director and Chief Administrative Officer for the Massachusetts Lottery.

Callouts on the ticket let players know there were $80 million+ in prizes to be won, and the lottery built awareness and anticipation of the game through POS and a minimal advertising campaign. Account representatives also educated retail partners about the game prior to its launch.

For a lottery with sales perennially so high it’s hard to move the needle, the $50, $100 And $500 Blowout game blew it out bigger than ever. In fact, it was the Massachusetts Lottery’s highest indexing $10 game over the last 24 months, driving an increase of 31.4% in $10 game sales and 6.1% in total instant game sales over the same period a year ago.